From the April Edition of ShowSight. Click to subcribe.

Social media can be surprising—in a good way. Amid the barrage of brags and the bashing of judges, users occasionally manage to send posts that are thoughtful and measured. Sometimes these posts generate a lively discussion on topics ranging from feeding and fertility to the future of the dog sport in America. Responses can be every bit as illuminating as the original post, if not moreso. Such was the case when I posted a simple memorial to my recently departed senior. The sympathetic replies from hundreds of Facebook friends took me totally by surprise.

Saying “goodbye” to an old dog is never easy, particularly when it’s announced in a public forum. So when I decided to post the passing of my old Irish Water Spaniel, “Kurre,” (pronounced “Curry”) on Facebook, I understood that the public memorial would reach many of her puppies’ people. What I couldn’t have predicted, however, was just how many users would empathize with the loss.

Kurre had been strong and resolute her whole life. But over the last few months, an accelerated weakness of her hind legs had slowed her down considerably. As her 13th birthday approached, Kurre could no longer bound onto a grooming table. Instead, she’d learned to wait—no small feat in and of itself—to be lifted for her grooming sessions. And instead of jumping up onto her favorite chair, a set of diminutive steps allowed easy access to her Crate and Barrel throne. Runners and area rugs were placed on the hardwood floors, and a set of non-slip socks improved her thrice daily walks. Those socks proved to be a blessing for us both. They improved Kurre’s mobility outdoors and gave me more time to enjoy our slow-motion strolls together.

When Kurre began to limp on her left front leg, she was outfitted with a doggie wheelchair. However, the aluminum and canvas contraption proved useless for a dog with only one good leg. Though she remained stoic in the face of this latest indignity, I finally accepted that Kurre’s once proud body was failing her. She’d all but lost her ability to walk. So, as we slumped together on the dining room floor, I promised Kurre that she could leave this world with her dignity intact. Choking back tears, I called the vet’s office and made arrangements for her to come to the house at the end of the day. When the vet and her assistant arrived, Kurre greeted these final visitors with plenty of kisses and a wagging tail. She seemed to enjoy the attention, oblivious to the finality of the moment. I, on the other hand, was suddenly overcome with doubt. I privately wondered, “Was I doing the best thing for Kurre?”

Though I’d prepared myself mentally for this moment, my heart was caught completely off-guard. Tearfully, I managed to utter the word, “Goodbye.”

It’s been said that time heals all wounds, and I suppose it’s true. In the days that followed Kurre’s passing, the bouts of sadness were offset by memories of her extraordinary life. Kurre was smart, even for an Irish Water Spaniel. Though her intelligence was never measured by an Obedience or Agility score, she possessed a kind of “supernatural” sensibility that wasn’t always easy to understand. Kurre was hyperaware of everything and everyone. Nothing and no one escaped her attention. (I swear she could see things that are invisible to mere mortals.) Kurre also possessed a boundless energy that could only be contained by her crate. She had two speeds: “on” and “crate.” Only when her limbs began to fail was she able to relax unincarcerated. In her prime, she could easily catch a ball in midair while doing a backflip. I was in awe
of her.

Kurre was a beautiful representative of her breed too. Though never a show dog, she was solidly made. Her proportions and strength of construction were a lesson in canine anatomy, and her balance was the kind that no handler can assemble. When viewed from any angle, Kurre didn’t disappoint. She possessed that elusive quality called “type,” without the trappings of superfluous glamour. The sight of her standing in the backyard was a privilege that always took my breath away, especially when she turned her head to look in my direction. It was then that I could appreciate her beautiful expression. The directness of her gaze held me spellbound. And even as her eyes grew tired and gray, the light behind them never failed. It only flickered. That is, it flickered until it was extinguished.

The decision to euthanize a beloved dog is always heartbreaking. However, the days and weeks that follow can be even tougher to bear. Feelings of emptiness and guilt creep through the house, silent reminders of life’s fleeting fragility. Only the responsibilities of daily life seem to ease the pain. For breeders of purebred dogs, this means caring for the departed dog’s sons and daughters, and grandsons and granddaughters. When Kurre passed, I wanted to let her puppies’ people know in a way that would celebrate her life, not focus on her death. So, when I posted a photo in memoriam on Facebook, it was accompanied by an anonymous Irish poem that perfectly characterizes Kurre’s wild Irish spirit. (Incidentally, if you Google the words “Irish,” “death” and “poem,” be prepared to sift through 17.6 million funeral blessings.) The piece I selected begins, “A strange blend of shyness, of pride and conceit, and stubborn refusal to bow in defeat.” That was Kurre.

I posted the memorial on Saint Patrick’s Day, and the strangest thing happened. No sooner had I shared the photo and poem than the first message of condolence appeared, followed quickly by another, and then another and another. The trickle of messages soon became a deluge of kindness, understanding and love from friends and family far and wide. From halfway around the world, messages were sent by dog people whom I’ve never met. The outpouring of compassion caught me completely offguard, reminding me that I was not alone in my grief. Each reply helped me to heal. In fact, the response to Kurre’s passing offered proof that people are genuinely kind, and social media can have a surprisingly positive affect on the world. 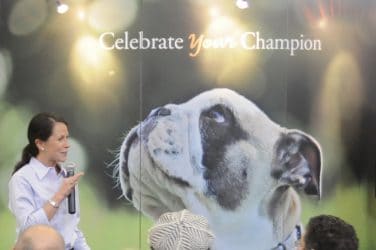 (Above – Social media platforms such as Facebook can be used to spread positive ...

QUESTION FOR ALL SHOWSIGHT READERS Name something in the past year that’s made you proud ...