It was the 52nd edition of this famous show in Flanders capital. It is, fortunately, a single CACIB show and a rather good one with 1826 entries. Last year there were 2152 entries but this edition was still better than 2016 when they had 1688 entries. Of course, single shows are affected too by the new rage of double shows in one weekend, simply because more and more dogs get their necessary number of tickets for Championship in much shorter time. No longer need to enter for more shows.

The show as on the very same weekend as the famous and very popular 10–miles run in Antwerp. Together with nice weather you can forget a high number of visitors. Publicity for a dog show is becoming a real problem nowadays. Publicity panels on the street are very expensive and need the help of a team to hang them out. The best publicity for a show I saw last year for the show of Ciney. The big trailer in the meadow aside the highway was such a big eyecatcher. He who did not see it was probably asleep. How often are people asking me to let them know when there is dog show coming up? It’s a proof that there is certainly an interest for it and if no publicity is made, a missed opportunity. If it pays off I don’t know, but certainly, the show of Ciney had a big number of visitors and Kortrijk is still the number one, thanks to extensive TV publicity for this show, maybe some 15 years ago. Most trade stand holders were not too disappointed. However, I wonder why there had to be four photo boots, two sponsored, one of the club itself and one private one. The sponsored ones were for free, but only for the BOB’s. The Brabo studio was only allowed to take pictures from the juniors and veterans but no BOB’s, and the rest could head for the private studio. The club had also signed in for live streaming of the main ring. Unfortunately, on Saturday there seem to have been problems. It was said that the video would be on display on Youtube, but I couldn’t find anything of it or on the Brabo website, at least no video that was produced by the club itself. The results, on the other hand, were uploaded fast and completely and also the catalog was very OK as usual, one of the best in Belgium, including extensive statistics.

Brabo has an empty main ring during the day and this ring is used to entertain the public with dog dancing and obedience displays and demonstrations of assistant dogs in action. The main ring set up is nice and looks like the one of Luxembourg, except for the colors and back panel that on the contrary are not bright. Along with the bags of dog food, the pots of flowers and the cups, the podium is too busy and often it was difficult to see the dogs behind, with legs hidden behind. There was no need to put any bags in front, there is enough reference to the sponsor and if you want plants or flowers, build something behind the podium to put some pots on. Just keep some space for the cup along with the sponsor logo and the number and that is it. I also wonder why we need more than three dogs placed and all group
winners placed.

It was surprising to find so many rare breeds in the catalog like the Cão da Serra da Estrela, Mastin de los Pyreneos, the Cimarro Uruguayo, a Tornjak, a Coban Cöpegi and a Kromforländer, a Gos d’Atura Catalan and an Ogar Polski. All breeds that you can see from time to time over here in Belgium, but it is rare to find so many on one singular show. Brabo also attracts many international visitors. 44% are foreigners, the majority from the Netherlands, followed by France and Germany but also 37 entries from the United Kingdom. Contrary to this, Brabo has a tradition to invite as much native judges as possible. For the main ring, it are only Belgian judges who are allowed to judge. 24 Judges were invited and 13 of them were Belgian judges. The dogs/judging day rate was not spectacular with a score of only 47,1. Luxembourg had 61 and for the Ambiorix trophy, the score was as high as 72. Of course, the impact of a rather low score is not that high as inviting local judges has a much lower impact on the expenses for the show. Ten Judges were judging one day only. Only five judges had a day score of +70 entries, Mr. Tesics of Hungary had 72 on Saturday and 73 on Sunday. He had the highest entry of the weekend. Best scoring judge of Saturday was Mrs. Hectors from Belgium, wife of the Brabo president. She had 90 dogs to judge. On Sunday she had a high number of English Cocker Spaniels, 39. Mrs. Van Raamsdonk–Blatter, also from Belgium had all the poodles among a few more breeds on Saturday and thus reached the nice score of 78. She didn’t judge on Sunday. On Sunday the highest score was for judge Mr. Beare from Ireland. He had 28 Jack Russells. The best breed scores were for the Australian Shepherds on Saturday, judged by Mr. Dux from Germany. Worth mentioning were the 23 Afgan Hounds for judge Mr. Tesics and the 27 Samojeds for Mr. Zeppi from Italy. On Sunday Mr. Coble from the UK had 39 Staffordshire Bull Terriers while Mr. Van den Bosh from Belgium found 31 Bulldogs and 24 Dogues de Bordeaux in his ring. As you see, no really high scoring breeds.

Best In Show judge was Mrs. Monique Van Brempt, world famous and originating from Antwerp herself. Mrs. Van Brempt is one of our few all–rounders and a keen Terrier specialist. Only eight group winners were present for the line-up. Her 3rd place went to the 13–year–old Schipperke, Atilla du Clos de le Prere, who also won the veteran class. He is taken care of by Mrs. and Mr. Ferraris–de Liedekerke from Belgium. A nice surprise to see this little dog end up so high. Besides the fact that he is deaf, he is still in fantastic shape and a super example of size and confirmation of a good breed model. Mr. D. Spruyt from Belgium, a specialist in Belgian breeds, was his judge for the breed and the group. Second place went to the Cão de Agua Português “Casa Hoya’s Stop and Stare” owned by Ilona Griffioen—van Beek from the Netherlands. Mr. J. De Cuyper judged this 2–year–old male that was the only one in his breed. Mr. T. Leenen judged the group. Best In Show went to the Toy Poodle “Yamit Muskat Boomer”. Judge Vanaken Jean—François from Belgium is his proud owner. Yamit is Russian bred and was entered in Junior Class male to be judged by Mrs. Van Raamsdonk—Blatter who made him BOB, made him also Best Junior dog of Saturday and along with her husband Best Junior In Show. Mrs. Hectors gave him BOG. Judge Vanaken was obviously delighted to see his dog be awarded by so many of his colleagues and take away so many trophies and titles.

Let us hope that Brabo will face the concurrence of the many double shows and stand out as one of the big shows
in Belgium.

1. Winter Melody all that Fire 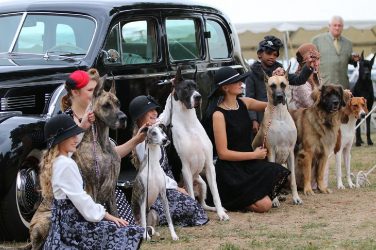