The Louisiana-born American Hairless Terrier is a smart, inquisitive, and lively dog that comes in both hairless and coated forms. He is a great option for allergy sufferers looking for a terrier with real grit and bravery.

The American Hairless Terrier is available with or without hair. While the coated version has a short, lustrous coat, the hairless variety may have whiskers and brow hairs. The skin of the hairless is warm to the touch and smooth. Both kinds are distinguished by their large, wedge-shaped heads. Round, expressive eyes that shine with inquiry are framed by upright, V-shaped ears. This breed makes vigilant watchdogs and is protective of its owners.

The American Hairless Terrier stands between 12 to 16 inches at the shoulder. The usual weight range is 12 to 16 pounds.

American Hairless Terrier are healthy and hardy breed, with the life expectency being from 14 to 16 years.

The American Hairless Terrier is a naturally occurring offshoot of the Rat Terrier and is the only hairless breed that is native to the United States.

The Rat Terrier is one of many terrier breeds that were developed in England in the early 1800s to eradicate rats that spread disease and looted food supplies in both urban and rural areas. These proto-Rat Terriers, originally dubbed “Feists” to reflect their combative nature, were prolific ratters.

British miners looking for a new start in the late 1800s brought Feists to rural America. With crosses to the Smooth Fox Terrier, the Feist was stabilized as a breed here. The term Rat Terrier is credited to President Theodore Roosevelt, who liked his Feist named Skip.

Let’s jump forward to 1972 from Roosevelt’s era. A curious event then occurred in Trout, Louisiana: a hairless pup was born into a litter of medium-sized Rat Terriers with typically coated parents. The hairless puppy was purchased by Edwin and Willie Scott, who gave her the name Josephine. She was bred, and the result was a hairless female named Gypsy. Eight years later, Josephine gave birth to two hairless children named Jemima and Snoopy after having several litters of coated puppies. Snoopy mated with his sisters in 1983 and produced a number of hairless kids. A new breed, the American Rat Terrier, was born.

The Scotts kept meticulous records, continued their breeding effort, and started the first organization for their new breed. The American Hairless Terrier Group of America, the breed’s AKC parent club, was founded in 2009; the breed received full AKC recognition in 2016. 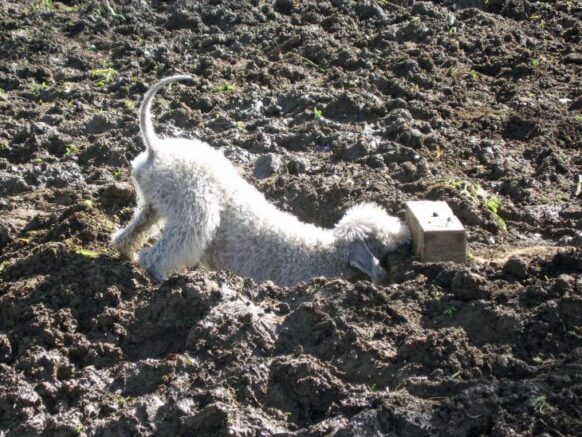