Stop Look and Listen: Everyone’s a Spectator At Westminster

The few benched shows that remain in America are different from the rest. Amidst the glut of today’s all-breed, limited breed and specialty offerings, these events offer exhibitors a chance to slow down just long enough to socialize in a way that fanciers of yore took for granted. They also offer visitors a chance to get up close and personal with the pride and joy of America’s preservation dog breeders. In the modern show-and-go world, it’s nice to enjoy the occasional weekend where both novice and expert dog lovers can come together for more than a brief moment. The exchanges that are facilitated by the benches are particularly notable at Westminster where even seasoned all-rounders become spectators at the sight of so many beautiful dogs under one roof (and on two piers.) At America’s most venerable dog show, everyone takes a moment to stop, look and listen to the celebration of the purebred dog.

Stopped in Your Tracks

Back when the entirety of the Westminster Kennel Club dog show was held at Madison Square Garden — in the dark ages of 2012 — it was not uncommon for people and dogs to find themselves stuck in gridlock on both the Garden’s floor and in the backstage benching area. So thick were the crowded conditions that exhibitors had to allow a half hour or more to get from the bench to the ring. But now that breed judging takes place at Piers 92/94 during the day, there are fewer chances to get stuck in a human traffic jam. (Truth be told, congestion does occur at Pier 92’s elevators from time to time, but a comfortably appointed lounge area awaits at Pier 94 where respite may be found for those who enjoy a bit of people watching.) Spectators with or without an entry can stop and have lunch with a friend or do a little shopping in the vendor’s area where business this year seemed to be brisk. And for anyone needing to walk-off his or her lunch or whose overstuffed shopping bags, betrayed their empty pockets, a promenade down the length of Pier 94 introduces spectators to past Westminster winners. Thanks to the installation of past Best in Show winners’ photos, wearyguests can stop at their favorites to relive the moment or dream about the future. Of course, the best place to be stopped in your tracks at Westminster is at any of the spacious rings that are filled to overflowing. (Entries this year appraoched 3,000.) At any time of the day, many of the nation’s top-winning dogs in virtually every recognized breed can be found in all their glory not just for the judges’ pleasure, but also for the benefit of breed enthusiasts and would-be dog moms and dads.

Take a Look Around

Spectators have two good reasons to go to Westminster. The first is to see the dogs, of course, and the second is to watch them being judged by some of the brightest minds in the business. Since the benched areas are a big draw, a perfect setting is provided where everyone can take a good look around. For first-time visitors, the benches become a kind of living dog book where most of the 201 recognized breeds and varieties can come to life. Here, different breed characteristics can be touched as well as seen, and temperament can be considered in a way that’s just not possible through a Google search. However, Westminster is not a show held simply for the benefit of the general public. Seasoned exhibitors enjoy seeing the dogs here too. So just before the start of Group judging each night, all of the day’s breed winners were assembled backstage on benches once again. Among the dogs that fanciers got to meet up close and personal at Madison Square Garden this year was one Russian beauty that displayed her “sassy” side by simply turning her long and elegant head. Another dashing dog, attired in his very own black-and-white formal wear, endeavored to be “clever” as another charming fellow was “Puttin’ on the Ritz” with his every move. One diminutive rascal held his Group’s “winning ticket” and another was quite simply “full of beans” as he captivated the audience with his begging routine. This year’s Reserve Best in Show winner managed to dance into the hearts of millions as he effortlessly “dances with wildflowers.” The only dog to remain undeafted at this year’s event was a delightful little powderpuff that showed every dog lover in New York and around the world what was on his mind. His triumphant victory seemed to shout, “All I care about is love!”

Listen With Your Heart

With so many dogs to love and people to see, it’s a wonder visitors to Westminster can manage to make it through to Best in Show at all following the two-day (not to mention the preceding weekend) marathon of shows they’ve just endured. But dog people are a hardy lot, and the Garden has plenty of comfortable seats to take at the end of a grueling day. There’s no better place to watch a dog show. The lighting is perfection and the acoustics supports both thunderous cheers and nail-biting silence in equal measure. In fact, the sounds of Westminster are a big part of what makes the show so special. The singing of the National Anthem never fails to inspire, and the powerful voice of the show’s announcer sets the perfect tone to deliver breed-specific information as well as the occasional reminder that every dog on the floor is the result — and responsibility — of a dedicated preservation breeder. Spontaneous cheers and jeers mark memorable moments throughout the night, as does laughter inspired by a big stretch from a little dog or a tall sit-up from one that’s long and low. For those lucky few who find themselves sitting in the world’s most famous arena on a cold night in February, these are the sounds of a celebration that began 142 years ago thatc remains firmly fixed in the hearts of every devoted dog fancier today.

Probiotics For Your Dog? WKC named Dr. Joseph Rossi as the Veterinarian of the Year

The Westminster Kennel Club (WKC), named Dr. Joseph Rossi as the recipient of the ... 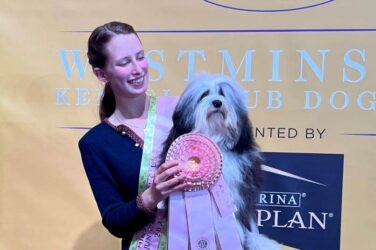