The plane rose higher and higher. Malcontents around me murmured and muttered, anxious to pop open laptops and frantically, rapidly, tap. Many punched backlit buttons to select movies or TV shows to idly pass the time. Some had plugs already stuck in their ears and with my near-canine auditory sense I could hear their music, too. I tuned them all out. I was returning from a wonderful weekend of dog shows and refused to entertain anything but lovely doggie thoughts.

For I had been fully in my element the last three days, surrounded by smart people, watching masters at the top of their game in rings along with neophytes young and old. And of course everywhere I looked I saw dogs, the focus of my attention and love since I was a child. I’ve included a photo of Amar, son of my dear friends Adnan Balas & Ferida Salkic, with my dog Romeo, wearing the expression I’m told was on my face upon my first canine encounter. The picture of him and Romy is one of my favorite images, and in fairness later in this issue I have one of his sister, too.

Thinking back, thinking present, and thinking forward at the same time overloaded my normally-robust brain. I yawned. I sighed. I hit the release, reclined my seat just a bit so as not to mash into the person behind, and the jet engines’ hum lulled me into a deep, comfy sleep. And I had a dream…
Now, in this dream I zoomed through the next sixty-four years just as swiftly as I seem to have flown through the last sixty-four. (The fact that I was still this age is kind of dreamy, too.) I was ready for a dog show. Homework was done. My dog was pristine clean, microscopically groomed and soldier-like trained. And yet I was in my jammies.

I mention pajamas because over that weekend I got to see something that you didn’t, and I didn’t take photos because this isn’t TMZ. I happened to be staying at the same hotel as the judges and at 2:47 am Saturday the fire alarm screamed and we had to evacuate, by stairwells, fast. Granted there were only nine floors—my last apartment in Manhattan was on the forty-fourth and we’d had to do the same thing there once, too—but the best part is, there we all were, in the parking lot, and in a little clique was the entire Greenville/Piedmont judging panel in their jammies and whatnot, doing what? What would you expect? Talking about dogs. Within the hour we got the all-clear and had to trudge back up the stairs, only to be re-awakened at 3:45 by the very same blaring thing. (This time, though, I was one of the few who went all the way downstairs. Ladies and gentlemen, as a multiple-hurricane survivor I tell you what I routinely tell everybody else: ALWAYS treat a warning as if it’s real because you never know if it is or if it’s not. Off my soapbox and back to my dream…)

So there I was, not clad for human consumption but ready to compete. And here’s the kicker. I didn’t load a motor home. I didn’t pack a car. My dog and I didn’t even have to leave our home.

In my trophy room (well, I said it was a dream, didn’t I?) was all sorts of digital paraphernalia by which the job would soon get done. This is how it worked. First we utilized our scanner—it’s not breed specific, just crate-shaped. I’d already trained Rebel or whoever to squint for this part of the exam; he cannot wear shades like a regular celeb and we’ll test his eye size, shape and color with a kinder scanner later. He hops happily into the device and 10,000 pairs of electronic cyes capture every exterior attribute he has. A sensor in the floor records his weight. Then we hit the treadmill; its pressure-sensitivity evaluates gait and since it’s not motorized you have to gait with him too, to hit his prescribed stride. So you get exercised and judged at the same time. A brush-shaped sensor run through his coat will tell if that’s good, too. Then you ask him or her fifty questions and he or she must get every one right. Oh wait, is that for judges?  We’ll no longer need judges. (Sometimes dreams can get messed up.) In any case, once all the data is collected, it’s shipped off to a central computer and, when compared to that of all other entrants, it’s calibrated and calculated and out of your printer will pop the appropriate ribbon. Make sure you have plenty of toner in red, white & blue. Trophies and placques will be next-day delivered. By Drone.

Just as we were about to receive our dream award, the plane bumped down in Atlanta and I returned to a wide-awake state. I shuddered. That’s a future dog show??? It’s impossible to calculate how little fun that would be. But it brought to mind my fears about the Digital Era and its effects on our sport.

Access to everyone at any time has emboldened those with an axe to grind. I cannot count the times I’ve seen defamatory or slanderous digital spears hurled between dog fanciers due to any number of real or imagined transgressions. This has got to stop because although one’s friends might agree, hundreds if not thousands of people outside our inner circle might believe our sport condones such behavior. Our reputation must stay crystal clean for the benefit of all. Losing it would be devastating. That’s a huge fear that I have for our future.

I have no fear that you’ll find this issue as amazing as I find the idea of the at-home dog show awful. In-residence judging would, of course, have helped to prevent the Canine Influenza situation, tackled by Caroline Coile this month, but it wouldn’t have  improved much else. Speaking of which, our august team of writers, Jackie Fogel, Linda Ayers Turner Knorr, Dan Sayers, BJ Andrews—joined this month and every month to come by the uber-accomplished Allan Reznik to whom we extend open arms—as ever gives you much to think about and cause to applaud. And the contributions of the guests who share their expertise with us in our Herding Breeds section and our individual Breed features would keep you occupied from the time you take off from LAX to the time you land in Perth (with much left to savor later). And that’s taking the scenic route.  But back to my shocking, in-flight mental movie.

In my dream everyone was kindly to one another online and all the news was “Real.” That in itself would be a dream come true. But regardless of the dire predictions we hear, I cling to a rosy picture of our future.

I’m not quite sure where we’re heading but I know where I want to go: to a place where we’re united in our fight to protect dogs. What has made this sport so powerful and so attractive through its one-hundred-fifty-eight years has been the camaraderie of the people in it, and the dogs that possess the most healing, nurturing, loving ability of any living thing. And what has made this magazine one-of-a-kind since inception has been the people behind it and the people in it. I’m extremely proud to have been at its helm for what has now been twenty-five years.

Yes, ShowSight’s more than old enough to vote and in every State, old enough to drink, so I’d like to raise a toast to everyone who’s been part of this magnificent publication since day one. I also send my love to my late husband, co-breeder of the many champions we showed, my business partner and my co-founder of this magazine, the late Duane Doll, so sorely missed by all.  But since I don’t drink and haven’t since ‘95, I had to find another way to celebrate the occasion.

So I ordered a cake for you and me. It appears below in all its glory, as yet untouched (but not for long). Since you weren’t here, each of my dogs got an extra, canine-appropriate healthy treat, while I ate a piece of cake for you and I ate a piece for me. (Perhaps that fantasy treadmill’s not a bad idea after all.) And I thought back over the quarter-century since we invented this magazine, the views and values we’ve promoted, and ShowSight’s gifts to me, to you, to our sport and to our dogs. I no longer own it, but no one loves it more.

And no one loves dogs more than the people I’m proud to know. My fellow dog fanciers have kept me going through thick and thin, and dogs have been the highlight of my entire life. With my Sights firmly set on the future of dogs and Shows, I vow that I will view each day, each person, and especially each dog, just as the pictures show: through the delighted, devoted, wondering eyes of a child.
I’ll see you next month.

From The Editor Emeritus: A Very Bright Start To A Promising Year

Photo by Sharon Carvalho.   JUST THINK ABOUT IT: diving headlong into 2018 with my ... 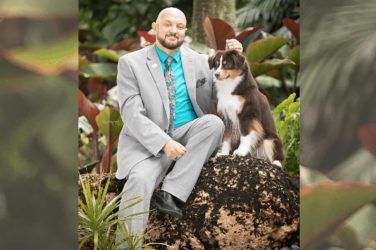 Aramedia Group, Inc. is pleased to announce the appointment of Billy Huntington to their ...

Remembering Miss Dorothy Nickles – The Standard for Dog Fanciers has no Age Disqualification.

At a recent show a guy and I had to make a rapid ramp-to-table ...

From the Executive Editor Emeritus