One of my semi-local kennel clubs just held their annual match. Based on the very crowded crating area, it was a great turnout, with puppies and young dogs, junior handlers and first-time show dog owners, obedience and rally entries. It was a long but fun day, with only one little glitch:
adult handling.

The women’s handling class had about 15 entrants, with dogs ranging in experience from show-ring-ready to barely leash broke (I was showing my mom’s new Pem Corgi puppy, that is a little pistol but needed a “Sudden Stops and Turns” sign for his first outing!). The judge was very thorough, and worked her way down to her top handlers. When the placements were awarded, it came out that both the first and second place winners are professional handlers. Most of us knew this already, but the judge had not, and was apparently not happy. Throughout the day I heard some other people grousing about the professional handlers in the adult handling class, and that they should be at real shows, not a match.

Here’s the thing. There was no stipulation in the premium list that professional handlers could not enter the handling classes. These handlers were also both handling young dogs—one I believe was 11 months old and started in his show career, and the other was 3 or 4 months old and learning the game. Were they well trained? You bet! Were they presented beautifully? Yes again! And so were several of the other entrants. Nothing was done to harm or hinder the other handlers in the ring. And it was a match—no one earned points toward a Championship or national ranking. There is nothing to gain from a match except experience.

All show dogs require practice and training to put on a polished performance in the ring. Professional handlers don’t have some magical juice that they baptize puppies with to make them perfectly trained—they go through the same process of teaching stacking, freestacking and gaiting that everyone else does, and they take those puppies places to practice. A match is one of those places! It is, after all, a practice show—what better place to test a young dog’s training?

This match did have point limits for competing in the regular conformation classes. The 11-month-old dog has 6 singles, making him ineligible for the regular classes. The only way he was able to get some ring time at the match was in women’s handling, so that is where he was entered. The younger puppy was one of several that her professional handler (and breeder) was showing that day, so she spread her pups out throughout the various classes and divisions. They were here for the same reason as everyone else—to practice in a show setting and give their young dogs a positive experience.

In a way, this was the perfect experiment: professional handlers mixed in with owner-handlers ranging in skill from raw beginners to seasoned breeder-owner-handlers, and a judge who had no idea that some of them were pros. There was no foul play here, no picking by the face on the end of the lead rather than the dog (or, in this case, the handling/presentation). This judge evaluated her entry without any preconceived notions, and the top two handlers that she selected were professional handlers showing dogs that they have put a lot of work into to train and prepare.

This doesn’t mean that the rest of the handlers in the class were terrible or somehow lacking. That poor judge had a terrible time choosing her placements, and it showed in how long she worked the teams before and after each cut. Evaluating handling always has some subjectivity to it, and the dogs being presented can make a huge difference—exactly the reason why many competitive junior handlers try to get a really nice, mature dog to show. It is a lot easier to make a good dog look good than it is one with major faults, and it is much easier to perfect details with an experienced dog that you have worked with than one who doesn’t know you from Frankenstein. As far as I could tell, most if not all of the handlers were showing their young dogs who need more mileage. Sure, we all like to win, but the main point of a match is to practice in a show setting to make it more real for both dog and handler. My performance would have been much better if I had been showing my special instead of a baby puppy that had never seen a ring before, but the puppy wouldn’t have had his first show ring experience and I wouldn’t have gotten to see what we need to work on.

It all comes down to the same things I said in my column this past July. Professional handlers are not evil, and they do not preclude owner-handlers from being successful. If a judge truly is placing dogs based on the handlers, that is the judge’s fault, not the professional handler’s. Talk to the AKC Rep, request that your kennel club never hire that judge again. It is judges’ responsibility to evaluate dogs according to the standard, and it is handlers’ responsibility to present their dogs to the best of their ability. You will notice that I just said, “handlers’ responsibility,” rather than, “professional handlers’ responsibility.” There is no reason that an owner-handler with an untrained dog who hasn’t had her nails trimmed in months should get a free pass to Best In Show. It is the responsibility of every single handler to train, condition, groom, and otherwise prepare his or her dog for the ring, and to practice and learn how to present that dog well. Professional handlers have the incentive that if they do a poor job, they will lose clients and not have any income coming in. Owner-handlers need to consider themselves their own clients, and approach preparing and presenting dogs with the same drive. If your dog paces on the down and back and you don’t correct it and do it again, it is no one’s fault but your own.

Our priorities are all out of whack. We need to complain less and train more. The only intrinsic difference between professional handlers and owner-handlers is that the pros get paid. Everyone is capable of getting a nice dog, going to a handling class, and buying a kangaroo leather lead and a Talbot’s suit. Books on handling are available online, as well as all kinds of instructional YouTube videos that can be incredibly useful. If you want to win, you have to participate in the game and give it your best effort.

This attitude of professional-handlers-versus-owner-handlers creates a dynamic that says that owner-handlers are somehow less capable, and amateurs in every sense of the word. And it’s just not true. Sure, there are some true amateurs. But there are also people like me—I dabble in handling here and there, but it is not my career by any stretch of the imagination, and I primarily show my own dogs that I bred and own. And then there are people who have been showing for forever and are incredibly well-known and successful, but who just have never been paid to handle. Many professional handlers also show dogs that they actually own and/or bred themselves. It isn’t black and white.

It didn’t surprise me that the professional handlers won the women’s handling class. They have made it a top priority to learn how to handle well, and have worked with their respective dogs to learn what needs to be done to make them look their best. If adult handling was a serious competition with rankings and such, many of the handlers in that ring probably would have shown up with their more experienced dogs that they know better. But it isn’t, so we all showed up with the dogs that needed some practice. Those handlers are also both very nice people, and love their dogs and competing in conformation just as much as any pure amateur walking starry-eyed into their first convention center.

We all do this because we love dogs. Be a good sport, win or lose, and enjoy the ride. 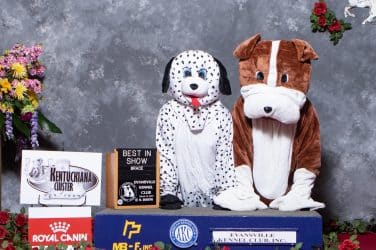 I am a bit of a grammar nerd. Scratch that—I am a huge grammar ...