The Kennel Club of Philadelphia announced that it has donated a total of $300,000 to three notable dog organizations—$100,000 each to the AKC Reunite, Take The Lead, and AKC Canine Health Foundation.

“We have been truly blessed since 2002 to have two wonderful partners, Purina and NBC,” said Wayne Ferguson, president of the Kennel Cub of Philadelphia. “That partnership has allowed us to stage a great dog show each year and to produce it on television as The National Dog Show presented by Purina on NBC on Thanksgiving Day.

“Our partners and our club members have worked very hard to make this partnership a great success, and it is because of all of them that we are now able to give back something significant to three great organizations that are a huge part of our world.”

AKC Reunite is the nation’s largest non-profit pet recovery service. Since its inception in 1995, AKC Reunite has provided more than 7 million pet owners with 24/7 pet recovery services with microchips, universal scanners and collar tags, resulting in more than 500,000 happy reunions between pets and the people who love them. AKC Reunite also provides Pet Disaster Relief Trailers to assist with pet care and rescue after natural disasters.  See www.akcreunite.org

KCP has requested that its donation be used to provide trailers for four counties in Pennsylvania (Philadelphia, Delaware, Chester and Northampton) and four counties in New Jersey (Hudson, Monmouth, Ocean and Atlantic).

“AKC Reunite is deeply grateful to the Kennel Club of Philadelphia for this generous donation,” said CEO Tom Sharp of AKC Reunite. “With this support, we can extend AKC Pet Disaster Relief trailers to eight more regions, ensuring emergency pet supplies will be available when needed the most. These trailers have been so helpful after recent natural disasters and will be a great asset to New Jersey and Pennsylvania.”

Since 1995, the AKC Canine Health Foundation has leveraged the power of science to address the health needs of all dogs. With more than $46 million invested to date, the Foundation funds the highest quality canine health research and shares information on the funded discoveries that help prevent, treat and cure canine diseases. The Foundation exceeds industry standards for fiscal responsibility, as demonstrated by their four-star Charity Navigator rating and GuideStar Platinum Seal of Transparency.
Learn more at www.akcchf.org

“AKC Canine Health Foundation (CHF) expresses our sincere appreciation to the directors and members of the Kennel Club of Philadelphia for their longstanding support of canine health research,” says CHF CEO, Dr. Diane Brown. “Working closely with KCP, and through this generous donation, CHF continues to find and fund the best scientific programs to ensure a healthier future for dogs.”

This gift is unrestricted, meaning that the club is directing the CHF to determine how to use the funds most effectively.

Take The Lead provides direct services, support and care for people in the sport of purebred dogs who suffer the devastation of life-threatening or terminal illness. Founded in 1993 as a not-for-profit foundation under Section 501(c)3 of the Internal Revenue Code, Take The Lead relies upon membership, donations and fundraising events held around the country.

“Take The Lead” is honored and pleased to be a recipient of this generous donation,” said Thomas H. Bradley, 3d., Chief Operating Officer. “It helps us continue our work for members of the dog show family. KCP is a member of that family, of course, so this is indeed putting something back into the sport. On behalf of all who we touch, now and in the future, we thank them.” Learn more at: www.takethelead.org

The Kennel Club of Philadelphia and its predecessor clubs have been presenting dog shows since 1879, and annually since 1933. A member of the American Kennel Club since 1913, its dog shows are among the very few remaining benched shows in this country. The annual National Dog Show Presented by Purina and hosted by the Kennel Club of Philadelphia airs on NBC on Thanksgiving Day. It is by far the most widely-watched canine event in the world, capturing more than 25 million viewers in 2018.

5,003 dogs compete for the title of National Champion in Orlando

"Learning All the Moving Parts" is a monthly column that examines the various components ... 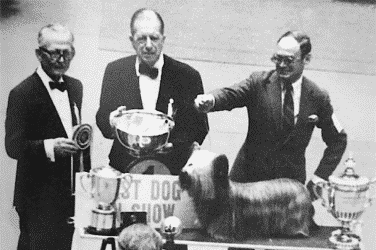