I recently met a dead dog with a fascinating life story.

While making my way through Washington, D.C.’s Union Station toward the taxicab stand, my extreme lack of patience was met with an extremely long queue. So, through a cold and windy November rain, I ran across the street to seek shelter under an ornate portico where I’d intended to contact Uber for a ride to Dupont Circle. But as I reached for my phone, I noticed that my temporary refuge was actually a rather grand entrance to the National Postal Museum. Having never met a museum I didn’t like, I put away my phone and—with only an hour to spare—took a self-guided tour of America’s curated homage to philately (the study of stamps and postal history). To my surprise, I learned that the museum’s collection contains the remains of a Terrier that once traveled the world and became a folk hero of sorts at the turn of the 20th century.

The Smithsonian’s National Postal Museum contains nearly six million items and approximately 4,000 specimens as part of its National Philatelic Collection. Located on Columbus Circle, the Beaux Arts building showcases the largest and most valuable collection of its kind in the world. Among its more notable exhibits are John Lennon’s boyhood stamp album and several surviving letters from the 1860-1861 Pony Express service. But the collection’s most curious specimen sits passively in a grand atrium alongside a Concord-style stage coach and a vintage deHavilland DH-4 airplane. Preserved for posterity under glass, the postal service’s unofficial mascot wears a leather collar adorned with tags bestowed upon him by industrious workers and imperial emperors.

Below: The National Postal Museum collection currently contains 372 tags that were given to Owney. Photo by Dan Sayers.

The story of “Owney” begins in a post office in Albany, New York. A dog of unknown origin (most accounts identify him variously as a Border or Irish Terrier), Owney simply appeared one day and proceeded to make his bed on a pile of mail bags. The postal clerks quickly adopted him and the little dog soon became their traveling companion. Owney’s attachment to the mail bags led him to the Albany train station where he boarded mail-sorting trains to New York, Boston and Chicago. Wherever he went, the intrepid Terrier was met with kindness and it was believed no accident would befall a train with Owney on board. In time, Owney’s adventures took him to places farther afield, eventually crossing the border into Canada. (One of his trips to Montreal resulted in a demand from the local postmaster for $2.50 to cover the cost of dog food!)

As his journeys grew ever longer, the postal clerks in Albany became concerned for Owney’s safety. They decided to attach a dog tag to his collar that read: “Owney, Post Office, Albany, New York.” Other post offices quickly followed suit, adding tags of their own. For the better part of a decade, the canine vagabond was given various tags, tokens and trinkets. So numerous had Owney’s collection become that postal clerks throughout North America would remove various tags and send them back to Albany for safe-keeping. To help lighten the little dog’s load even further, Postmaster General John Wanamaker presented Owney with a vest that could accommodate a multitude of tags. It is estimated that 1,017 metal pieces found their way to the vest at some point in time. At the museum, a bronze statue of Owney by sculptor Daniel C. Brown features both the vest and many of its tags. 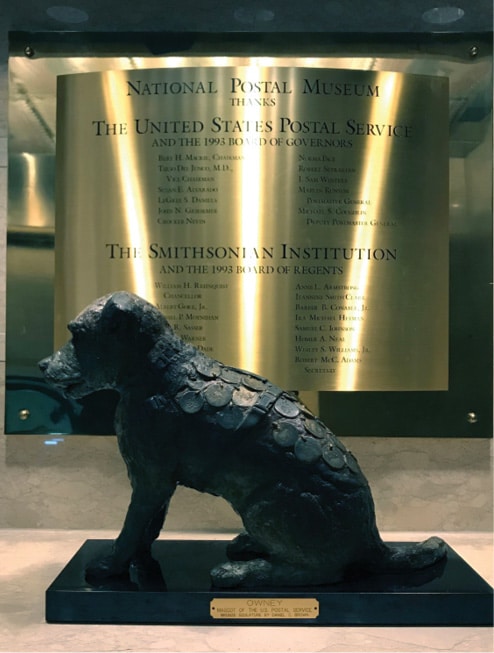 In 1894, fresh from an excursion to Alaska, Owney left Tacoma, Washington, on the trip of his lifetime. As a goodwill ambassador for the U.S. Postal Service, the bedazzled Border (or Irish) traveled for four months aboard the North Pacific mail steamer Victoria on a course for Asia, North Africa and Europe. By the time he returned to New York he’d been awarded two passports and several medals, including one bearing the Imperial Seal of Japan and another a Chinese dragon. In Hong Kong and Singapore, coins were attached to Owney’s vest, and stopovers in Egypt, Algeria and the Azores only added to his cache. Wherever he went, his adornment allowed him to be treated like a dog of great importance. His world tour only increased his fame. When he returned to the States on December 28, his arrival was covered by local, national and international newspapers. Even the Los Angeles Kennel Club awarded him a “Best Traveled Dog” medal.

All good things, as they say, must come to an end. Although he’d logged more than 143,000 miles in his lifetime, Owney the Elder was no longer permitted to ride the rails or the high seas. Nearing the end of his celebrated life, the world-famous wanderer had apparently grown both quarrelsome and weary. (He’d reportedly become prone to biting some of the hands that fed him.) Yet despite protestations from an influential Chicago Railway Mail Service manager who referred him as a “mongrel cur,” Owney was granted one final journey aboard a mail train by the postal workers who had come to see him as more than a mascot. Unfortunately, Owney’s life came to a sudden and tragic end. Newspaper accounts of the day reported that the old dog had become ill and allegedly attacked a postal clerk and a U.S. Marshall in Toledo, Ohio. Before anything could be done to intervene, the local postmaster ordered that Owney be shot and killed. The headline of the June 11, 1897 edition of the Toledo Bee read: “Tramp Dog Was Executed.” 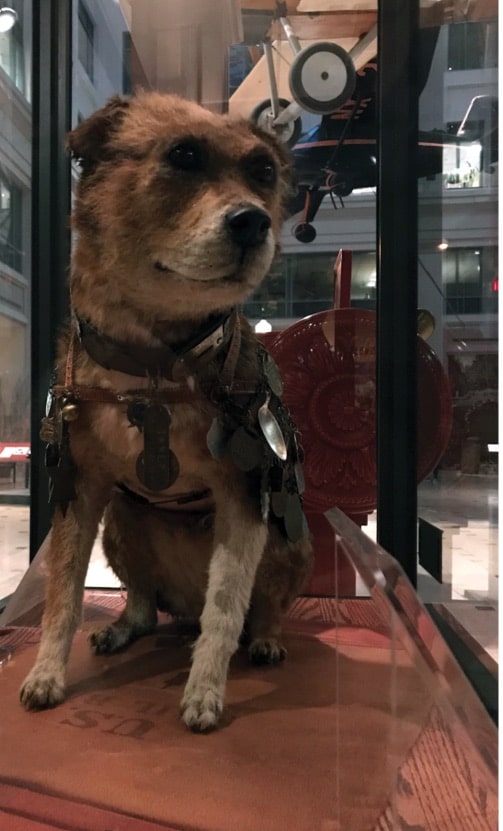 Upon his death, Owney was summarily eulogized in the international press. Postal clerks refused to bury him, choosing instead to have his remains preserved by means of taxidermy. In 1904, Owney’s effigy was displayed at the St. Louis World’s Fair with a commemorative silver spoon commissioned by the postal workers of Cleveland, Ohio, and manufactured by jeweler and watchmaker Webster Clay Ball. Following the fair, Owney’s remains were sent to the Smithsonian together with his vest and 372 of his tags. Though his legacy faded during the 20th century (more popular dogs such as Rin Tin Tin, Lassie and My Own Brucie captured the public’s imagination), he was not forgotten at the National Postal Museum. In celebration of his arrival in 1911, Owney received a makeover and was once again presented to the public. As part of a centennial celebration, the U.S. Postal Service issued an “Owney Forever” stamp that features a portrait by painter Bill Bond that includes five representative dog tags selected by the artist. The curated exhibition was titled, “Art of the Stamp: Owney the Postal Dog” and it included the rejuvenated Owney wearing his vest with much of its original regalia intact. This is Owney as I met him.

Though some might find Owney’s preserved remains a bit macabre, his legacy could have been lost without it. His effigy is a reminder to today’s internet users of a time when hand-written notes arrived by mail and a little dog could ride the rails without benefit of a service dog registry. In fact, Owney would have remained unknown to me—and, perhaps, to you—if not for a cold November rain.

Below – Owney is thought to have traveled 143,000 miles during his lifetime.  Photo courtesy National Postal Museum. 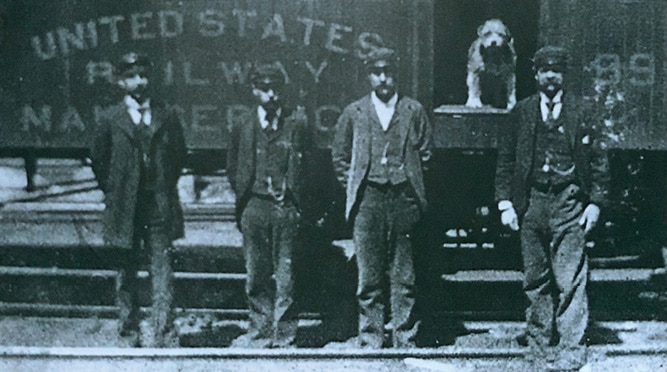 Celebrating the Rottweiler (yes, this is for judges!)

The Hound Group Community Speaks Out 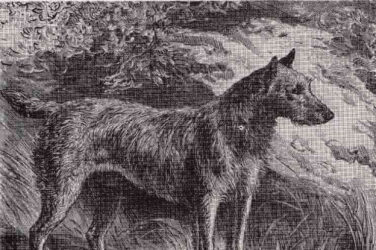 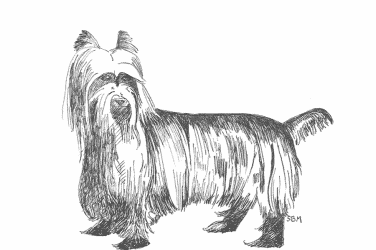 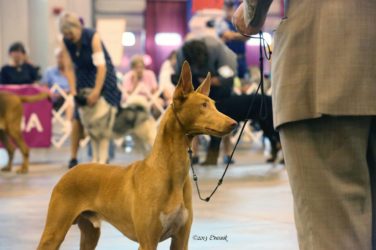