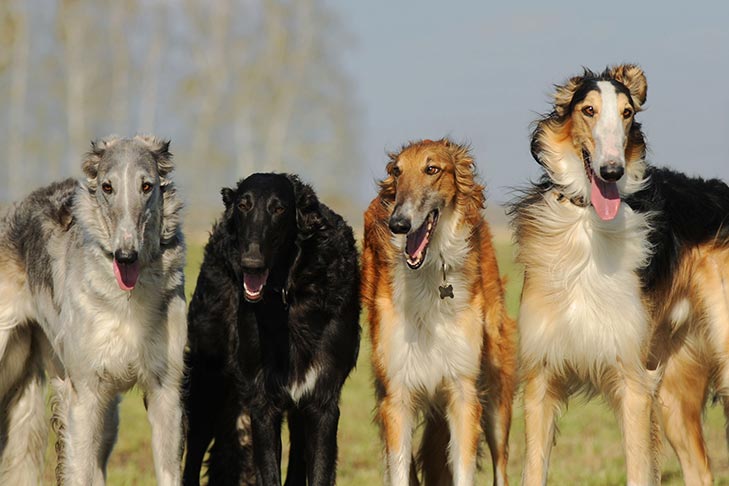 All breeds have specific breed elements. To quote Richard G. Beauchamp from his book, Solving the Mysteries of Breed Type, these include coat, head, movement, function, and temperament. But what makes these elements specific to a Borzoi? Let’s look at coat, head, and movement.

A Borzoi will spend hours out in the snow, curled in a ball, comfortable and protected by that double coat. Climate and function have played a big role in developing the breed over hundreds of years. Consider the geography of origin for the Borzoi; the steppes of Russia with its cold harsh winters, hot summer days, and temperatures that run to extremes from day to day and with the time of year. To simplify, the Borzoi is a blend of an ancient Persian greyhound and a heavier, northern working breed similar to an Ovcharka. To get a dense, protective coat that sheds dirt and debris, there had to be a double coat, for protection in the winters, and a silky outer coat. They had to have a silky outer coat with guard hairs so that the dogs would be able to move through rugged terrain with speed, without getting hampered by a wooly or an over-abundant coat. A ruff around the neck was important to protect the Borzoi from the bite of a wolf. With the ruff came fringe on the front legs and hind quarters, also for protection. 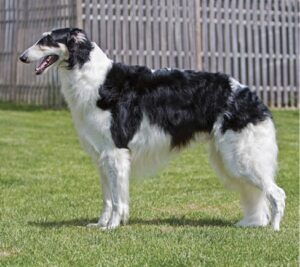 There are at least three types of coat in Borzoi; straight, wavy, and curly. All are correct and all should have a correct silky texture. A wooly coat is a fault. To the touch, the coat should be smooth and supple, not dry or harsh. In old photographs, you can see all three coats. However, a difference in length and abundance when compared with today’s show dog is evident. Kept in harsher conditions, those early hunting dogs often did not have the length or quality that our dogs have today. Improvements in nutrition and pet beds have made it easier to grow coats. It is debated that drier climates and higher elevations can make it easier for the coat to break off or appear flat. Those living in the Southern states suggest that, without the cold winter temperatures, it is hard to maintain the bigger and denser coats. Either way, Borzoi shed down to sparse coats during the year—especially the bitches after their seasons. Today’s conditioners, shampoos, oils, supplements, and soft beds have led to our dogs producing longer and more luxurious coats.

One word on color: “Immaterial.”

There may be a bad Borzoi, but there is never a bad color. 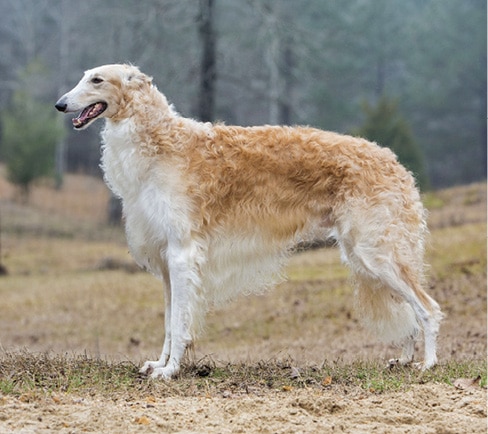 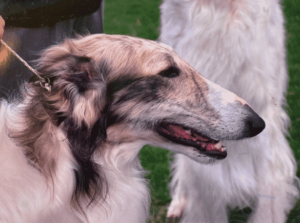 A unique feature of a Borzoi is the head. Both fill and finish are breed elements. In profile, there is a smoothness and a sleek appearance, with a barely noticeable stop. The eyes, set obliquely and almond-shaped, lead to that “far-off” expression. (It is true that they see the world differently and can focus on something insignificant off in the distance, rather than on the person at hand.) Ears are small, fine, and are held in a rose. They also can be pricked when at attention. Smaller ears have been found to have tighter ligaments, and some connection with better performance in the field. 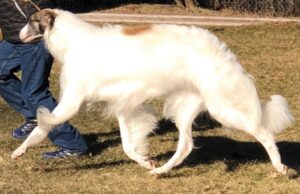 One of the breed characteristics is the Roman finish to the nose. This is different than Roman-headed. From the nasal bone to the tip of the nose, there is a downward slope. The Roman finish does not come from the planes of the head, but from the upper nasal cartilage. The planes of the head can be parallel or slightly downward-angled, but never such that they produce a down-faced profile. (This is not just a difference of degrees, but an entirely overdone angle.) In such a long head, a down-faced Borzoi will lead to an undershot bite. Most experienced breeders tread that fine line between beautiful heads with good fill in front of the eyes—with a nearly imperceptible stop—and an overdone, Roman-headed, undershot dog. The finish on any head should always have that sloping cartilage and large black nose that make up the Roman finish. Do not confuse a Roman nose with a Roman head. It might have been easier if the term used would have been “aquiline” (look of eagles) instead, where the beak is curved verses the whole head.

On movement, there is no doubt; Borzoi are bred to move

On movement, there is no doubt; Borzoi are bred to move. Efficient, ground-covering movement has always been a virtue. We are not talking about TRAD (Tremendous Reach and Drive), but a smooth and powerful gait. Borzoi had to follow the nobles on horseback, over very long distances, to the hunting grounds. Once there, they still had to have enough energy to do their job. A short stride or pounding movement is inefficient, leading to dogs that break down or have no stamina once on the field. Short hocks and strong, but springy, pasterns provide sound running gear. Borzoi have hare feet, never splayed. These flexible hounds need strong toplines that can extend in both a convex and a concave arch, to accomplish the double suspension gallop; simply stated, a topline rising at the loin in a graceful curve. 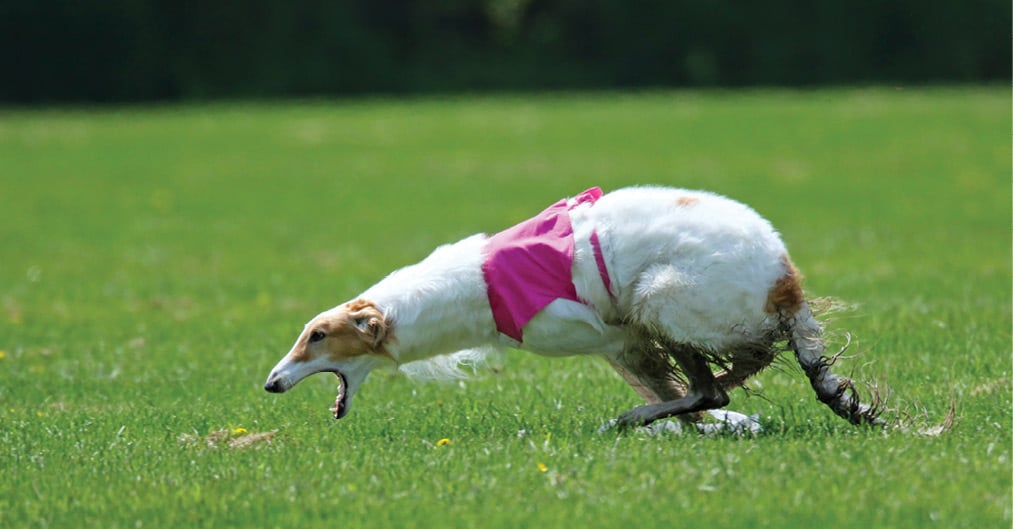 It is interesting that seventy percent of the verbiage in the standard relates directly to movement. In the show ring, a trot is as good as you will get to evaluate movement and, if you do see the double suspension gallop, it would be because the Borzoi escaped its owner’s grasp and headed across the fairgrounds to chase some small game that caught its eye.

Years ago, in the ring next to the Borzoi judging, Anne Rogers Clark started yelling and was seen scooping up her Toy Poodle with both arms. Looking across the ring, we were shocked to see a Borzoi that had caught sight of the Poodle entry and decided the hunt was on. Back in the Borzoi ring, a well-known handler was obliviously looking in the opposite direction, with an empty lead blowing in the wind. Mrs. Clark was not amused, but we were all surprised to see that you can do a double suspension gallop in the Toy ring.

The Miniature American Shepherd was developed by breeding smaller Australian Shepherds in order to ... 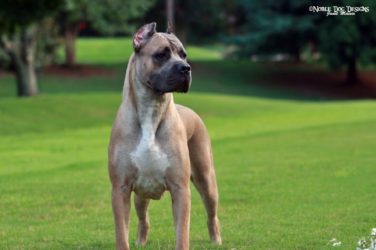 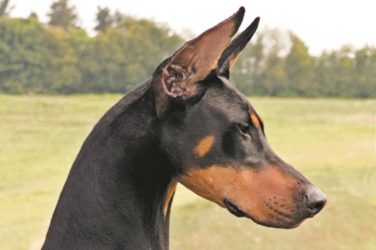 It was late on Sunday evening and I had just returned from a show ... 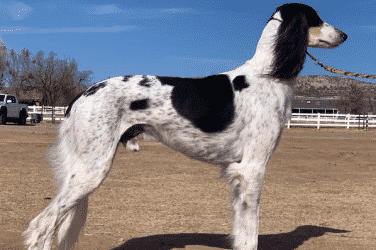 What does Saluki’s Brief Standard Tell Us About the Breed?