When I was a kid we learned the state capitols, state flags, state birds and state trees. But the state dogs? Why not?

Some are obvious. Of course Massachusetts is the Boston Terrier. Maryland is the Chesapeake Bay Retriever. Alaska the Alaskan Malamute. Some require just a little knowledge of dog history to understand: Virginia, the American Foxhound; South Carolina, the Boykin Spaniel; Wisconsin, the American Water Spaniel.

Remember Seaman, of Lewis and Clark fame? His trek across America as part of their Journey of Discovery ended on the Oregon coast. He may not have been the first dog to cross the continent, but he was the first named dog to do so—and he was a Newfoundland. Seaman is well-remembered in Oregon. He has statues in several cities, including one on the Lewis and Clark College campus in Portland, where the Newfoundland is the college mascot. Each year Newfoundland owners gather at Seaman Day in Astoria, Oregon. So maybe the Newfoundland wasn’t born in Oregon, but he sure seems to be loved there. So why not make it official and crown him Oregon’s state dog?

“I just assumed it WAS the state dog,” says breeder Becky Davis of Nottabear Newfoundlands. Davis has had Newfs for five years, but spent two years researching them beforehand. That’s how she became aware of their prominent place in the state’s history. Then she found out something else: “I trained my dog for service work and took her everywhere with me and I learned very quickly that people have very little knowledge about Lewis and Clark, their journey to Oregon, what a province is, geography and dog breeds as a whole…” So she started giving seminars at schools and libraries and found that as long as the dog was there, people were happy to learn. “They had lots of questions and these engagements ran over the 30 minutes I was scheduled into two and three hours!” She received more requests than she could handle, so she and her mother, Susan Reznicsek, split up, even venturing to other states as the requests grew.

When Davis discovered Oregon didn’t have a state dog, she sent an email to several Oregon representatives detailing Lewis and Clark’s journey to Oregon with Seaman. She also mentioned the many rivers, lakes and oceans in Oregon and how the Newfoundland dog is prized for his natural lifesaving abilities. “Newfoundlands are beautiful like the rivers, large like the mountains and strong like the fir trees. And Newfoundlands love rain. They have the resiliency and loyalty of our early pioneers. They are true Oregonians!” she wrote. She included photos of her dogs doing cancer therapy, speaking engagements, swimming, playing and at dog shows. “I wanted to show my dogs as civil servants,” she says. “I wanted to show dog people as people communities need and want more of."

Just a few days later she received this email: “Hello! From Oregon state representative Vic Gilliam, we would love to meet your dogs and hear your presentation this Thursday.” She wasn’t ready for that! Only three days to prepare, with a litter due the day before, 10 muddy Newfs and no presentation! Fortunately her whole family pitched in and she, her mother and son arrived at the state capitol building with two clean Newfs.

“They’d prepared secret parking for us to avoid the media attention. We were greeted by some media and many state representatives for about an hour in the lobby. Everyone wanted a picture with the dogs, who were give the title ‘civil service animals.’ They talked about this being a great moment in history and everyone wanted to be involved.”

Eventually they spoke to a panel of representatives. “We really wanted to represent not only our breed, but all dogs in a favorable light. We tried hard to follow the rules of the meeting, but some rules were hard to remember… You must always address the chair first when answering a question. I think we did okay, the dogs were wonderful and after the meeting all of the committee members wanted to meet with the dogs, take pictures with and of the dogs and ask a lot of questions. Representative Gilliam came and spoke with us and said we had passed this part of the process, now it would go to the house. After having this so long it was hard to see it go—like sending a child off to school.”

Surprisingly, the brush with fame also elicited some negative responses. Davis received complaints that spotlighting Newfs would make them too popular with backyard breeders and puppy millers, or that breeders just wanted to put rescues out of business (an aside: I thought rescues wanted to put themselves out of “business”), or that they were wasting taxpayer’s money, or “Why can’t Oregon invent its own dog breed instead of stealing Newfoundlands?” or my favorite, that they supported eating dogs because Lewis and Clark ate their dog! (And no, Seaman did not end up on the end of a fork, although all of the members of the Corps of Discovery except for Clark did eat dog meat (a total of 263 dogs, in fact), as was traditional with many of the Native American tribes they met during their travels. But Seaman was spared, despite his family-sized-meal potential and was a much favored member of the group).

More than these complaints, logistics stand in the way of seeing the Newfoundland named Oregon’s state dog any time soon. With only five weeks in this year’s session and the two-bill limit for each legislator, it may not be formally considered in this round. But there’s next year.

You may be saying: “What do I care about state dogs?” And I am saying: “You should.” Promoting interest in any breed promotes interest in all. I would argue that the process of choosing a state dog is actually more important than the ultimate dog chosen, especially if it can kindle suggestions and even a friendly rivalry.

Davis has shown you don’t have to be a big name or even know your way around the capitol to do this. You just need to have a compelling story, a few email addresses and be ready to follow up with a personal appearance. Of course, having a group behind your breed of choice wouldn’t hurt. And it would be great PR to have school kids get involved. Campaigns from school children led to the Alaskan Malamute’s and the Chinook’s designations as Alaska’s and New Hampshire’s state dogs.

Does your state have a state dog? Only 11 do, with five more considering or having considered proposals. Two have sort of state dogs: New York the service dog and Colorado recently named rescue dogs and cats as the state pets. But most are dogless. I live in Florida, where the Greyhound seems the obvious choice due to (and in spite of) racing’s influence on tourism in earlier years. And my breed, Saluki, seems the best choice for the state of Illinois, since Southern Illinois University’s mascot is the Saluki! I’m thinking Hawaiian Poi Dog for Hawaii, Chihuahua for Arizona, Treeing Walker for Kentucky and Bluetick Coonhound or Tennessee Brindle for Tennessee. I might even suggest the Salish Wool Dog instead of the Siberian Husky for Washington, just to emphasize that breeds, like species, can be lost forever. I don’t really see the Golden Retriever-Georgia connection; the Alapaha Blue Blood Bulldog or Redbone Coonhound seem better choices of native Georgians. Goldens are a much better choice for the “The Golden State,” California. I’m open to ideas for the rest. Bull Terrier for Idaho? (as in “Spuds” MacKenzie?) Collie for Colorado? (Just because it sounds good.) And New York’s state dog should change every year according to what breed wins Westminster. Of course if New York is already claimed by the service dog, just leave the AENC in Florida and have Florida’s state dog change with the Invitational BIS winner. Good PR.

In the current climate, no doubt a countermovement will arise to name the “rescue dog” or “the mutt” as the state dog in almost every breed. And perhaps they are the right choice for states in which dogs played no historical role—but I’d be hard pressed to think of such a state. As our dogs helped forge the new frontiers alongside explorers and settlers, as they helped guard the homestead and livestock, fill the pots, eradicate pests that threatened crops, control flocks and herds—could America, or your state, be what it is today without specialized dogs at our sides?

So here’s your assignment (yes, you have homework this month): Look at what one family accomplished for their breed in their state. Do the same.

Make it an excuse to establish how important dogs and in particular, purebreds, were to your state’s exploration, settlement, recreation or economy historically and how your state should acknowledge your breed’s contributions. If your state doesn’t have a particular breed of historical significance, make a case for why a particular breed is important now. Is there a breed-centered event held there? Perhaps the Sunnyside gathering of Collies is enough to make them the choice for New Jersey, or the Greyhounds Reach the Beach event for Delaware. What better way to have a group of people in place with the same breed to promote? Let’s get a breed for every state!

• Georgia: Golden Retriever (1991) (Proposal failed; Bulldog have been suggested instead)

A Life Without Dog Shows 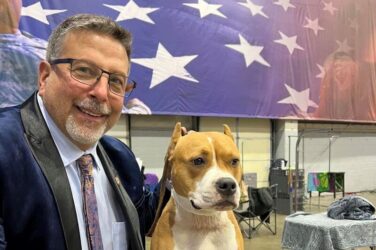 Life with dogs. It’s really about the dogs—a personal history accented by the dogs ...