Folding Chaor Forum. A Good Chair Can Be a Great Teacher

Best in Show, the critically acclaimed 2000 parody co-written and directed by Christopher Guest, is best remembered for the many ridiculous behind-the-scenes moments that take place in preparation of the fictional Mayflower Kennel Club dog show. Some of the film’s more absurd moments include an exhibitor’s meltdown, freaky footwear and a magazine launch. (Who can forget Busy Bee, the handler with two left feet, and AMERICAN BITCH?) Though the film’s satire is undeniably funny to fanciers and filmgoers alike, it doesn’t exactly capture the reason why dog shows are held in the first place. For a better understanding of this, the film offers a single clip to convey the fancy as it truly is. This easily overlooked scene takes place early in the film at an outdoor specialty where a small group of friends gathers around a ring to watch the judging. The scene is rather unremarkable except for its focus on the spectators—and their folding chairs. Those unassuming seats that appear ringside at every show provide one of the best places in the world to study purebred dogs.

Dog shows are a spectator sport. Or at least they used to be. There was a time—not so long ago—when a ring full of dogs encouraged ringside gathering. Exhibitors and spectators would pull up a chair to watch a single breed entry get sorted by a judge steeped in the history of that breed. Many of those judges were brought up in the sport and many more brought their intimate knowledge of a breed with them when they came to America from the breed’s country of origin. Entries in the more popular breeds were typically large, sometimes in the triple digits. Those large entries encouraged breeders and exhibitors to sit a while. Spectators could watch the judging uninterrupted by little more than a greeting from an old friend or applause coming from an adjacent ring. Of course, nobody had smart phones in those days, so the only people taking pictures were the official show photographers. (Film and video recordings were the domain of the television networks.) Without smart phones in hand, the people sitting ringside paid attention to the judging. Each dog’s “two minutes” was watched by everyone, not just the judge. Spectators with an experienced eye could easily follow the judging and make sense—or not—of the placements. No one was distracted by phone calls and no one read emails or sent text messages. As a matter of fact, nobody could check to see how the competition was doing at another show half-way across the country. This news had to wait until the results were published in the AKC Gazette and delivered to subscribers’ doorsteps a month later!

When I first began going to dog shows, I didn’t have a dog to show. Heck, I didn’t even own a dog. I attended shows during school breaks whenever I could simply because I loved to see the dogs. I wanted to spend time away from books and around dogs and dog people. The first show I attended was the Kennel Club of Philadelphia in 1980 where Peter Green handled Ruth Cooper’s Norwich Terrier, Ch. Thrumpton’s Lord Brady, to Best in Show under Dr. Josephine Deubler. My first outdoor show was the following year at Trenton. Judge E. Irving Eldredge awarded Best in Show to Ch. Beaucrest Ruffian, a Bouvier des Flandres handled by Roy Holloway for Pat and Roy Schiller. Since I was new to dog shows, I didn’t know either of the winning dogs or their handlers. I had no idea who the judges were either. Owners? Breeders? They didn’t mean a thing to this novice spectator. I was too enamored of the dogs to focus my attention anywhere else.

While attending college, I went to every local show that I could. My traveling companion was always a folding chair I’d borrowed from my grandparents. I usually arrived before the National Anthem was played and I’d purchase a catalog and park my chair at one of the larger rings. I’d watch any breed with a big entry and I always stayed for Best in Show. In time, I noticed that many of the same dogs routinely represented their respective Groups in the final line-up. Eventually I began to recognize why the six (eventually seven) finalists were able to make it out of their Groups. From the comfort of a folding chair, I’d been getting an education on canine construction and locomotion, breed-specific characteristics and the human-canine bond. I was learning things about purebred dogs without ever realizing it.

Dog shows still offer an education to anyone with a love of dogs and a willingness to learn. Of course, it helps to have a large entry to watch and a judge with an intimate knowledge of the breed in the ring. But even when these criteria are met, lessons can only be learned by the student who pays attention. This requires the ability to sit still with mouth closed, eyes and ears open. A smart phone is not needed. In fact, with all its many functions, a phone holds little value to the ringside spectator. All that’s needed for class to be in session is a love of dogs, a willingness to learn, and a comfortable folding chair.

A ringside folding chair is one of the best places in the world to study purebred dogs. 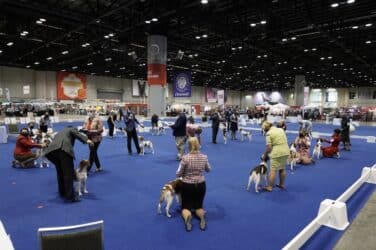 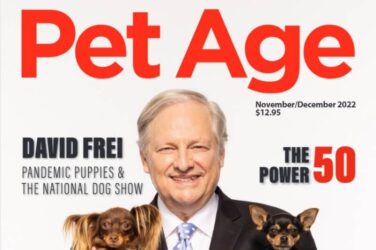