I’ve written about sportsmanship in the past. I’ve defended and criticized judges and breeders, professional handlers and dog show magazines. I’ve wondered about the future of our sport, and I’ve wondered about what the AKC is doing to keep breeding alive. I’ve questioned programs like Junior Showmanship and the National Owner-Handler competitions.  But I haven’t written about honor among us dog show people. I haven’t addressed the necessary bonds of trust, we must have for each other, and what it means to act honorably.  We need to talk.

Officially honor as a verb means to regard with great respect or fulfill an obligation or keep an agreement. It doesn’t specify conditions like “If I have enough time,” or “if something more interesting doesn’t pop up on my list of things to do,” or “If I remember it.” Honor is unconditional, and it’s pretty much a dichotomy. You either behave honorably or you don’t. You either fulfill your obligations or you don’t. In short, you do exactly what you say you are going to do.

This issue came up for me in a recent puppy sale I made to a buyer in Korea. I sold the Korean buyer an AKC champion bitch, and made all the arrangements to fly her there. About 2 weeks after she arrived in Korea I heard from the buyer who said he was checking AKC records and discovered that the bitch I sent only had 13 points. I was as shocked as a person can be. I very closely monitor all of the points on my dogs, and the AKC web site has made it increasingly easy to do that. I KNEW I had finished her championship. I had not even entered her in a show for 10 months because I was so sure she was finished. Well, I was wrong, and the dog I sent to Korea still needed two points to become an AKC champion.

I am not at all sure what happened, though I suspect there was a recording error somewhere along the line. A bitch I was showing at the same time is recorded as having 27 points –an unusually large number and quite a few more than I usually put on a dog even when looking for that elusive second major. The Korean bitch had started her winning early with a 3-point major at a terrier specialty, under a breeder judge. It was not hard to put points on her – she is a beautiful, elegant dog with a fabulous head and graceful movement. Her second major came quickly – the day before our National Specialty under a renowned terrier judge. I stopped showing her just two months later because I thought she was finished.

Unfortunately for me I did not keep a written record of her wins because I always rely upon the AKC records. Neither do I take photographs of single-point wins. I didn’t know I was going to be selling her, so I was not as diligent as I could have been. And because I manage a large number of breeding dogs in two breeds, I did not notice that her championship certificate was not among the others I was receiving around that time. It was a comedy of small errors that led up to this point. So when I got the message from the Korean buyer I was absolutely devastated. I spent one sleepless night ordering win records, verifying points and fretting about the situation. The next morning it became clear that I really only had one option open to me. I would have to bring her back to the States, put 2 more points on her, and send her back to Korea – at my expense. I had sold a champion. Honor demanded that I fulfill that obligation. Honor demanded that I would assume all of the expenses of correcting the error. Honor demanded that I act quickly and decisively, and apologize profusely for my mistake.

This weekend we finished the bitch – for real. We checked points, made sure everybody was entered in the right classes and the win was recorded accurately in the judges’ books. We did not move her up to Best Of Breed on the second day so there would be “insurance” points if she won again, and she did. I sent immediate word to the Korean buyer that she was, indeed, finally a real champion. It was an expensive lesson for me (always make sure wins are recorded accurately, and don’t assume anything until the certificate arrives).

I thought that would be the end of my tale of woe, but to my surprise there has been an interesting sequel. As I was taking the win- New Champion- photo, I was telling the judge the story of my mistake. The judge turned to me and said, “Well at least you did things the right way. I know of a well-known breeder in another breed who simply entered another dog under the unfinished dog’s registration number.  I guess he didn’t think we could tell the difference between a cream-colored really nice dog and a red, not-so-wonderful dog.” I must admit, that solution to my problem had not even occurred to me. It certainly would have been a lot less expensive, and everybody knows all bedlingtons look pretty much alike. That could have worked.  Even the people I travel with sometimes hand me the wrong dog to show in the classes. If I had the entire breed entry, who would even check or know who the actual dogs were?

Let me be clear that there is a definite difference between unintentional behaviors that result in mistakes and poor decisions, and intentional behaviors designed to mislead and obscure. There is no dishonor in mistakes and poor decisions or bad judgment.   Yet the end results are often the same whether they are the product of intentional misdeeds, or unintentional poor judgement. People end up getting dogs that are not as good as they are represented to be. However, uninformed breeders are simply making poor choices. They are not trying to deceive, and they are not falsifying base information. The integrity of the stud book remains intact in spite of their poor decisions. Anyone can easily see which dogs contributed to the mediocrity in front of them.  The people who intentionally deceive are damaging the integrity of an entire system based upon an expectation of honor and truth. Those actions are far more serious and destructive in the long run.

I know the dog-show stories as well as anybody. I know some people have finished less than worthy dogs by entering a good dog with the lesser dog’s number. I wonder why someone who knows better would do that just to put a title on an unworthy dog. I don’t understand how that benefits the breed or breeding programs. Find it a nice pet home and move forward. It’s not the end of the world if your dog or bitch does not achieve a ROM, a Grand Championship or top-twenty invitation.  The future of the breeds relies upon an accurate stud book, and that requires that people do not lie.

I think our popular culture is entering a new, unsavory era where lying is expected and tolerated more than in any time I can remember. I’d like to bring back the idea that we are only as good as our word. I made a mistake when I sold the unfinished bitch to a Korean buyer. And that mistake cost me a lot. But it did not cost me the relationship with people I hope will take a beautiful bloodline into the future. Mistakes will happen, but the true measure of a person is how they handle the corrections. Ultimately all we as breeders really have is our reputation, and I want mine to include the concept of honor. Our stud book also requires that we all act honorably. If we care about our legacy and the future of our dogs we must treat each other with respect and honor. It’s the only way to build trust, and the only way to move forward.

Indoor & outdoor shows… What’s good? What could be better?

QUESTION FOR ALL SHOWSIGHT READERS What’s your #1 complaint with outdoor shows? Indoor shows?  What ... From ShowSight Magazine, September 2017 Edition. "Learning All the Moving Parts" is a monthly ... 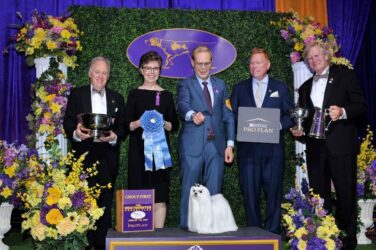