The Australian Stumpy Tail Cattle Dog is a large, sturdy dog with long legs and pricked (standing up) ears. The frequent lack of a tail is the breed’s main distinguishing characteristic and the reason it received its name. When there is a tail, it is undocked and only around 4 inches long. The coat is straight, rough, dense, and of medium to short length. The coat is either spotted in blue or red. The breed lacks the brown markings and points present on the Australian Cattle Dog.

The average life expectancy of the breed is 12 to 15 years. Despite being a generally healthy breed, it is advised that all Stumpys be checked for hip and elbow dysplasia, Progress Retinal Aprophy, Rod Cone Atrophy, and that all puppies be BAER tested because this breed is also prone to deafness and Primary Lens Luxation.

There are two points of view regarding the development of the Australian Stumpy Tail Cattle Dog.  Two stockmen in different states of Australia in the 1840s started breeding native working dogs with imported drover’s dogs, which would have carried the inherent taillessness. The Stumpy is thought to have been the first breed created in Australia. The Australian Cattle Dog was created when a few additional breeds were incorporated into the development process. 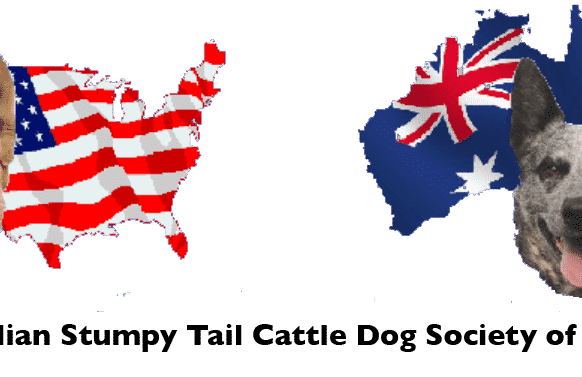