“An elegant, substantial and symmetrical gundog”—so starts the English Setter breed standard. These simple yet important words describe an English Setter well. Since their primary function was originally as an upland bird dog, the English Setter needs to be built correctly to do a job they can still do centuries later. While our show dogs sometimes suffer in classic field trial competition to our field-bred brethren, they are perfectly capable of competing in the field.

English Setters at their best are beautiful dogs. Their elegance and structure serve them well in both the show ring and in the field. Without the excessive coat sometimes demanded in the show ring, they make excellent gun dogs.

Structure is much more important than the amount of coat a dog carries. There should be enough coat to protect against the rigors of the field (briars, coarse grasses, etc.) but not so excessive that these coats come out of the field containing every seed and thorn the dog has run through. For this reason, coat texture and quantity are critical.

In fact, our standard states that the coat is “not so excessive as to hide the true lines and movement or to affect the dog’s appearance or function as a sporting dog.”

The Correct Structure of an English Setter Dog

Correct structure allows for stamina in the field. Combined with proper conditioning, a well-conformed English Setter is also a graceful athlete. The symmetrical dog tends to move efficiently in the field, with the front angulation matching the rear angulation and neither being excessive.

Proper front angulation allows for the “set” for which English Setters are known. Matching rear angulation provides the power to hold that set for several minutes. When out for a full day of hunting, you want your dog to be athletic enough to last the day with you. While the hunter may walk several miles, the dog often covers two to four times as much distance, and at a faster pace. An unbalanced, over-angulated dog soon tires and is incapable of doing its job for the hours required. Although our trials and tests don’t require as much stamina because of time constraints, unbalanced dogs oftenquickly tire within those time constraints. Yet because they are built correctly, many of our champion English Setters are also competitive field dogs. They also excel as personal gun dogs.

Although dual champions in our breed are still a bit of a novelty, they do exemplify the combination of proper structure with a strong drive to hunt upland birds. Most retain the original instinct of setting (crouching on game rather than with an upright stance) bred into the breed when hunters still harvested game with nets before the advent of guns. This sometimes puts the bench English Setter at a disadvantage in field trials where an upright Pointer stance with a high tail is often prized. However, they run just as strongly and have scenting ability comparable to the field lines. As English Setters, they require proper front and rear angulation to hold the setting crouch as the hunter approaches.

Our dual dogs represent the epitome of breeding, requiring both the beauty required in the show ring and the drive and stamina for the field. Temperament is also critical, exemplified by the fact that the overwhelming majority of our dual champions are not only amateur-handled but amateur-trained as well. Biddability or trainability makes this possible (as well as making them excellent Junior Showmanship dogs).

English Setter breeders and exhibitors owe much to M.A. Samuelson who bred and owned the first dual champion in our breed, DC Heathrow’s Rainbow Robber. She led the way for the rest of us to believe in our dogs’ abilities to compete in the field. Most of the early dual champions were on the west coast in the 1980s. After a dry spell, there has been a resurgence in running bench English Setters in the field. Most of this is concentrated east of the Mississippi River, although a few western owners are also running dual dogs.

Several English Setters have excelled at specialties along with having “broke dog” field points, proving that “pretty” and ability are not mutually exclusive traits. “Broke dog” points are points earned in gun dog or all-age stakes, where the dog is required to work birds without breaking point or chasing the bird. It is exciting to see English Setters bred for generations for the show ring not only enjoying their time in the field but also excelling.

It is critical that breeders, owners, exhibitors, and judges not lose sight of the English Setter’s original purpose. Even if never hunted, the English Setter should still be built like an athlete. Because of the beauty of the breed, we all sometimes get enamored with presentation over substance in the show ring. The proof of the pudding is the dog’s ability to continue to do the job it was bred for originally. If we lose sight of this, we run the risk of just having a generic show dog with unique coloring.

Are you looking for an English Setter puppy?

Want to help rescue and re-home an English Setter dog? 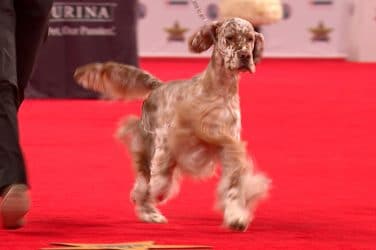 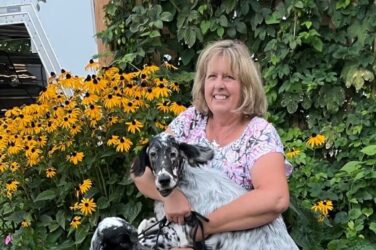 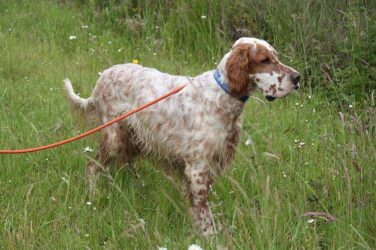