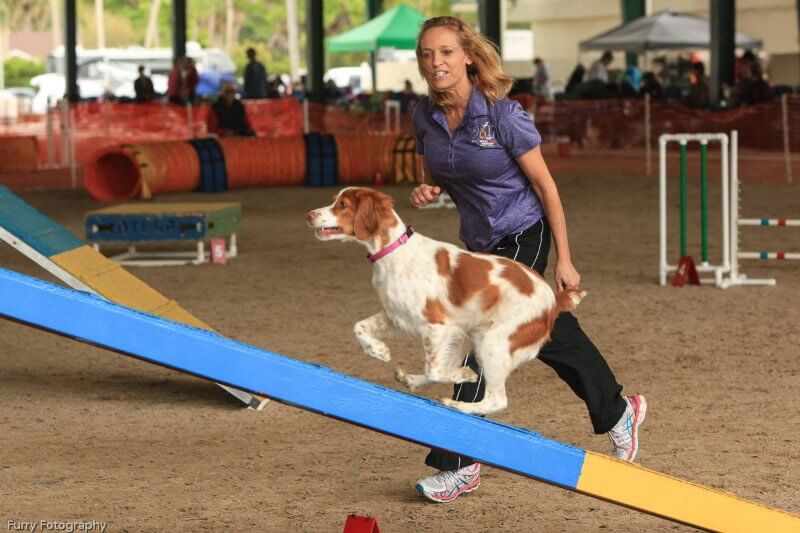 The world of Dog Agility and Dog Sports certainly has come a long way. The first American Kennel Club Agility Trial was held in Houston, Texas, on August 13, 1994. Although the sport originated earlier, dating back to a demonstration in the United Kingdom presented at Crufts dog show in the late 1970s, AKC has arguably been a forerunner in the advancement of the sport in the US.

Many changes have been made to the sport of Agility over the years to improve the safety and overall enjoyment of the game. At the risk of making myself sound old, I can remember when many of these changes occurred.

When I started playing Agility with my dogs, the vast majority of trials and classes were held outdoors. Rarely did we have fences or those lovely entry/exit gates that we now rely on to keep our dogs in the ring. In those early days, the ring often consisted of a piece of construction barrier tape strung across a grass field. Indoor arenas with Astroturf flooring, which are so commonplace now, were simply not available to most of us then.

When changes occur in this sport, as with most sports, they are made to improve the safety of the dog athletes and their handlers. Yes, I said athletes. These dogs, both large and small, are highly trained athletes. And, of course, changes have also occurred to add interest and enjoyment to the sport.

I remember one of the important changes that occurred in Agility. Around February 2010, AKC started to allow an increase in the spacing between the weave poles (from 20 to 24 inches). The competitors were thrilled! This change had the potential to preserve the health of dogs of all sizes.

With the narrower distance between the weave poles, the dogs had to twist and bend their backs in ways that may not always have been in the best interest of some of the larger breeds. The same could be said of long-backed dogs and fast dogs. Recognizing the potential for health issues, AKC widened the spacing. By January 2012, it was mandatory that the weaves be spaced 24 inches apart. This adjustment is only one example of the many changes and improvements that have been made along the way.

Agility, however, was not the only dog sport that was changing and improving.

When we talk about the American Kennel Club, most of us think of purebred dogs. Well, what if you have a mixed-breed dog and want to play dog sports? AKC has always encouraged people to support and adopt shelter or homeless dogs of all breeds, so it was only natural for the AKC to say yes to allowing mixed-breed dogs to be included in dog sports! As a competitor and an AKC Agility Judge, I supported the idea of the “All-American Dog,” aka mixed-breed dog, being included in dog sports and was very excited to hear that AKC wanted to include them as well.

On October 1, 2009, AKC began to register mixed-breed dogs. By April 1, 2010, mixed-breed dogs were being entered in Agility, Rally, and Obedience competitions. Dog sports have only increased in diversity from there. We now have Barn Hunt, FastCAT, Scent Work, Coursing Ability, Canine Good Citizen, and Trick Dogs too!

The American Kennel Club has gone from its first simple dog trial in Texas to certifying around 4,100 Agility Trials a year, according to AKC’s Director of Agility, Carrie DeYoung. Today there are shows small and large, from the Open and Novice levels-only trials to the Westminster Master Agility Championship trial in New York City, the AKC National Championships, and the AKC Invitationals. Each event, no matter the size, is there for the competitors to showcase their skills or simply for spectators to attend and watch for entertainment.

Of course, dogs love to have something to do. Just like us, dogs want to be entertained. When dogs are introduced to a new sport that they find entertaining, you will see their eyes light up. Some dogs have preferences and will like Barn Hunt; others may like Scent Work. You will know which game your dog loves when you try a dog sport and see the happy look on your dog’s face.

I have had people tell me that they don’t feel they could be good at a dog sport—or any sport. They say they are simply not the athletic type. Well, I tell them that when I first started taking Agility classes, I didn’t exactly float across the floor like Fred Astaire. I felt more like Frankenstein! Most people feel the same way, but with a little practice you are running your dog and having the time of your life before you know it. Meeting new people along the way is a great benefit as well.

Each dog sport has varying levels of difficulty based on the dog and handlers’ skill level. In Agility, you could start with classes, and then, when you’re ready to compete for titles, you may want to start with ACT (Agility Course Test). From there, you can move to Novice, Open, Excellent, and then Master levels. Working toward that Master Agility Champion title (MACH) is a process of advancement that allows you to move at your own speed. I do have a warning, though: Dog Sports can be addictive! However, young or more mature, graceful or, well, not so much, everyone can play Dog Sports games.

So, grab that housedog, big or small, purebred or mixed-breed, and join in the fun. Enroll in a class at your local dog training club and start enjoying the exciting world of Dog Sports. Then one day, you may be able to say to your very own Master Agility Champion, “We’ve come a long way, baby!”

Dock Diving – Number One Rule for New (and all) Teams 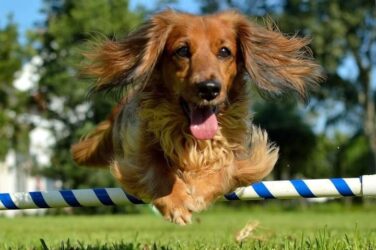 When “Gee!” was conceived, little did I know the journey on which she would ... 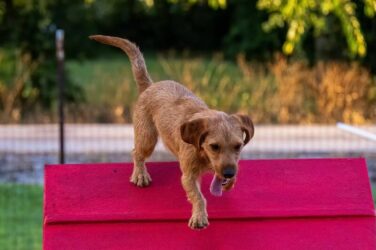 Basset Fauve de Bretagne is truly a versatile scenthound. Known to be smart, the ... 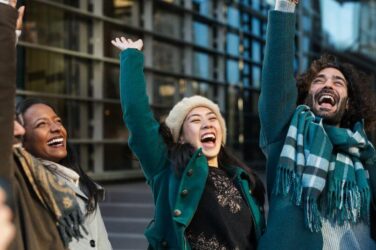 How Do You Define Success in Sport of Dogs?

Those of us who compete in the various sports of purebred dogs, know that ... Explore the draft heritage of the Bernese Mountain Dog. Learn how to start: Draft ... 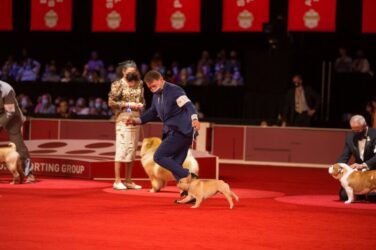 Entries are now open for the 2022 AKC National Championship presented by Royal Canin, ...