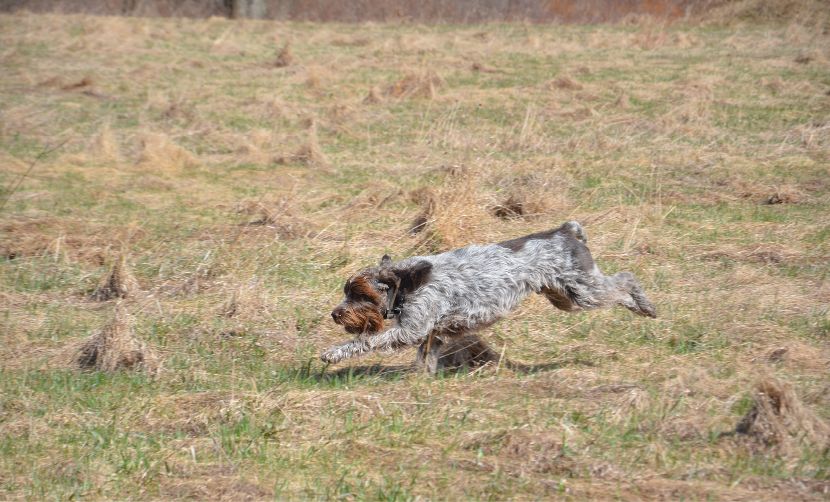 Form And Function Of The Wirehaired Pointing Griffon | American architect Louis Sullivan famously coined the phrase, “form follows function” in relation to 20th century modernist architecture and industrial design. In his view, the shape of a building or object should relate primarily to its intended purpose or function. His student, Frank Lloyd Wright, extended his mentor’s teaching by changing the phrase to “form and function are one.” These principles apply easily to the Wirehaired Pointing Griffon (the Griffon). Its conformation standard relates directly to its working characteristics and requirements in the field, and vice versa. The Griffon’s correct physical traits are essential to its ability to perform its function as a hunter in its own distinctive style.

The American Wirehaired Pointing Griffon Association, the parent club for the Griffon (AWPGA), adopted the official conformation standard for the breed in 1991. It drew heavily on standards adopted elsewhere, all of which were based on the standard fixed by Eduard Korthals, the founder of the breed, in the late 1800s. In early 2018, the AWPGA adopted the working standard for the Griffon. Again, it drew on the considerable work and research done by others. In adopting the working standard, the AWPGA recognized that the manner in which the Griffon works and hunts is as vital and inherent to the breed as its physical conformation. This article compares aspects of the two standards and discusses how the Griffon’s physical characteristics, as described in the conformation standard, are necessary for it to perform in accordance with the working standard.

Proper structure is required for the Griffon to exhibit the ideals set out in the working standard. According to the working standard, the Griffon’s general running style is a gallop. The body rocks slightly back and forth—from front to rear—around the imaginary axis that runs through the dog’s center of gravity and perpendicular to its topline. The working standard continues: “The [Griffon’s] long topline is held taut to favor propulsion. The [Griffon’s] well laid-back shoulder and long thigh promote vivacity and the bend of hock provides flexibility.”

In those two quoted sentences, the working standard directly implicates the following provisions taken directly from the conformation standard:

Topline – The back is strong and firm.
Forequarters – Shoulders are long, with good angulation, and well laid back.
Hindquarters – The thighs are long and well muscled.
Angulation in balance with the front.
Body – The loin is strong and well developed, being of medium length. The croup and rump are stoutly made with adequate length to favor speed.
Proportion – Slightly longer than tall, in a ratio of 10 to 9. The Griffon must not evolve towards a square conformation.
Gait – Viewed from the side, the topline is firm.
Also related to the gallop is the length of the Griffon’s neck. The conformation standard provides that the Griffon’s neck is to be relatively long. The longer length of neck facilitates the gallop and promotes a flexible head carriage and the head’s being carried in line with, or as an extension of, the topline. A neck that is too long leads to a gallop with the head raised, which is incorrect. A neck that is too short may not have the flexibility necessary to facilitate the gallop. The flexible head carriage promoted by the relatively long neck also gives the Griffon the ability to scent at a distance.

The working standard further provides that the Griffon’s quartering in the field should be fast, lively, and sustained. Well-recognized expert on the Griffon, Jean Castaing, explained that a sufficiently long croup is favorable for speed. He said, “The whole topline, without ceasing to be strong and sturdy, must present a certain length, for a long back favors speed.” Castaing also noted that the length of the shoulder favors speed, and therefore, the Griffon’s shoulder should be relatively long. The shoulder’s longer length and sufficient layback promote an efficient gallop as does a long and well-muscled thigh. According to Castaing, a more upright shoulder requires the Griffon to repeat its steps with greater frequency and it must make up with more frequent steps what it loses in the gallop. If the shoulder is long and slanting, all of the bones of the limbs will be long and that length will make the limbs more flexible. A short leg requires more steps, with each covering less ground, resulting in more fatigue and
less endurance. 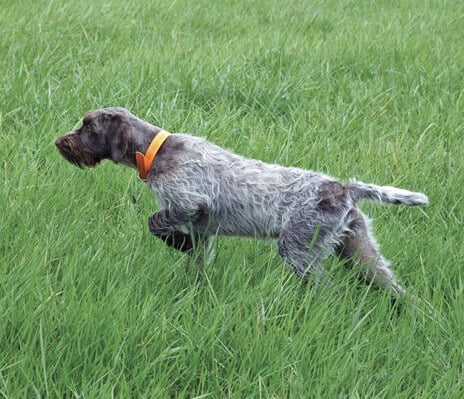 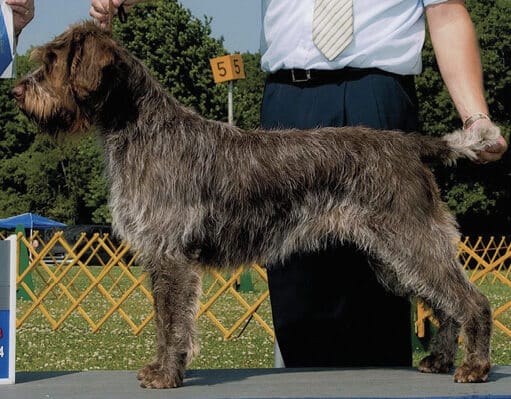 In Le Griffon Korthals by Marie Lautier and Jacques Carpentier (2012), the authors explain that the back must be strong because it is the drive shaft for the movement developed by the hind legs. The back must be firm and a source of power and strength. They further state that the shoulder must be very oblique; as the well laid-back shoulder contributes to the Griffon’s movement close to the ground, particularly in its slow approach to the game once game scent is detected and in the coulé, described below. The musculature of the shoulder is necessary for the flexing of the body.

The longer topline is also directly related to the conformation standard’s requirement on proportion. The Griffon is to be slightly longer than tall, in a ratio of ten to nine. The standard is explicit: “The Griffon must not evolve towards a square conformation.” Lautier and Carpentier explain that the rectangular configuration of the Griffon, with a long body, gives a lower construction, close to the ground, which promotes flexibility and fluidity of movement. It is that movement that in the last century earned the Griffon the name, “Korthals cats,” and is reflected in the conformation standard’s statement that the Griffon’s movement shows “an easy catlike gracefulness.” Good body length, flexibility of the loins, and closeness to the ground give the Griffon an almost feline pace and efficient, ground-covering ability.

This ability of the Griffon to be close to the ground, reflected in its proper shoulder layback, rear angulation in balance with the front, and rectangular proportion, is necessary for the Griffon to approach the game once scented, point, and perform a coulé, each in accordance with the desired style described in the working standard. When handling scent, the Griffon is to advance carefully but decisively to the game, with its legs bending progressively as it crouches closer to the ground. The working standard provides that the desired posture for the point is a flexed position, with the body low to the ground. The head and nose are to be in line with the back, the neck extended, the legs bent or crouched, and the tail motionless. In the coulé, which is a commanded approach to the game after the point is established, the movement is smooth and crouched.

The proper physical structure of the Griffon and its mental stability and temperament, all as set out in the conformation standard, tie directly to the movement and behavior the Griffon is to exhibit in the field. The Griffon’s working manner and characteristics described in the working standard relate directly to its physical conformation and temperament. Form and function truly are one in the Wirehaired Pointing Griffon. 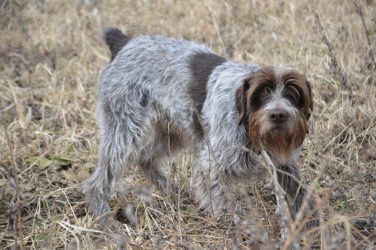 The Working Standard For The Wirehaired Pointing Griffon