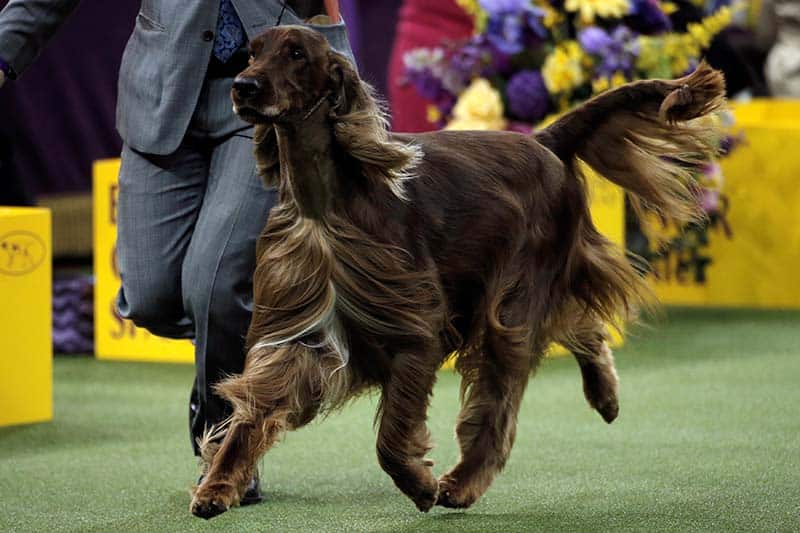 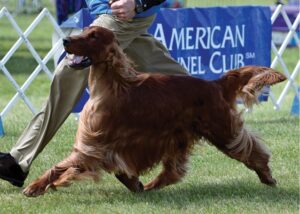 In a review of the Official Irish Setter Standard, one can see in the opening remarks that the Irish Setter is described as, “Afield, the Irish Setter is a swift-moving hunter; at home, a sweet-natured, trainable companion.” In the section under Gait, movement is described by stating, “At the trot, the gait is big, very lively, graceful and efficient.” Though the field and the show ring may be far from the same conditions, there are reasons why the two are related. And if we add a big dab of rollicking personality and correct structure, the picture is complete.

If truth is known, there is much uncertainty about the origin of the Irish Setter. It is supposed that through the use of spaniels, bred to other breeds, so came the setting spaniel of red and white. Broke to the net, they crouched or “set” whenever they came upon a game such as a partridge. Once guns were introduced, the style of hunting changed, finding the dogs working in a more upright position. Some breeders took a fancy to those with more red than white. Subsequently, through selective breeding, there came the “whole reds.” By the early 1800s, we had our Irish Setter in type and function. Certainly, through the comparison of pictures and paintings over the years, we can see changes today. But the basics then are still the basics! 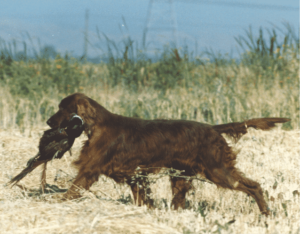 In many publications from the middle to late 1800s, such as the Dogs of the British Islands by J. H. Walsh (1886), authors wrote descriptions about the build of the breed with its slightly longer than the tall frame, sufficient bone, and a head allowing plenty of brain room. The chest is deep with well sprung ribs, allowing sufficient lung space, that ribbing is carried back along the spinal cord to support the firm back. Forelegs are straight and sinewy, feet small and firm. Mr. Walsh, based on his own observations and those accounted by well-respected breeders of the time, including Mr. Llewellin and Mr. Macdona, wrote that due to build and character, “the Irish Setter is fast and enduring” and he is an “invaluable aid to the gun.” They spoke to a “style of going” with free action, allowing the legs to move well under the dog, and yet, these swift-moving dogs with their heads well up were able to have “feelings for the scent.” But to be fair, in their complete observations they wrote of their Irish Setter puppies (and even broke dogs) having a different personality and courage than others, which required work to “keep him in a state of control.” And so, this author suggests that this was a first glimpse into that “rollicking personality.” 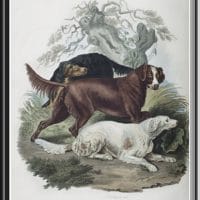 In early written Irish Setter Standard of Points, movement was not included in the schedule, yet it was followed by an explanation of correct gait. Then, as now, at a trot the gait is big and lively, referring to the forelegs reaching well ahead as if to pull in the ground, with hindquarters driving smoothly and with great power. At an extended trot, the head reaches slightly forward, keeping the dog in balance. Feet stay close to the ground, appearing to clip the top of the grass. The head is held high, not back. There should be no hackney gait or any unnecessary lifting of the feet. The correct specimen always exhibits balance, whether standing or in motion. This is an animated (yes, rollicking) breed with its personality coming through in the ring or in the field—or in performance or companion events.

In early written Standard of Points, movement was not included in the schedule, yet it was followed by an explanation of correct gait…The correct specimen always exhibits balance, whether standing or in motion. 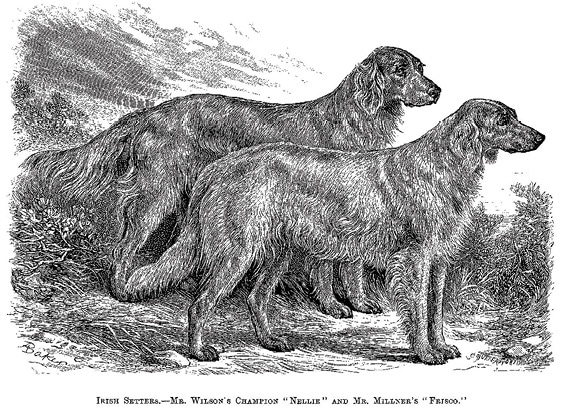 Through an understanding of an Irish Setter standing and moving based in Irish Setter Standard, I hope one takes away from this article the following:

The National Specialty will be held on June 14-19, 2021 in Fredrick, Maryland, at the Clarion Inn Fredrick Event Center. Judges Education will be held on Friday and Saturday, June 18-19. Contact Sam Houston McDonald at samisiw@verizon.net for more information. US breeders have produced a number of hearty and hungry canine originals by combining ... 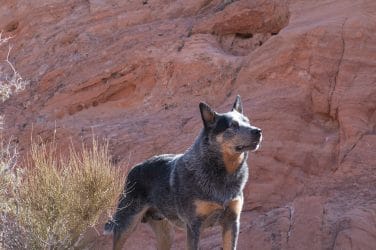 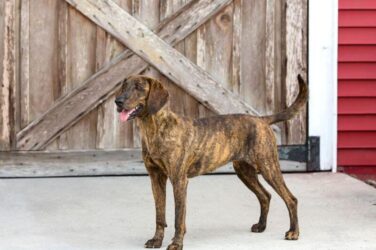 The Plott – A Hound of a Different Color

Plott Hound stands out for a reason among the scenthounds. Neither the Foxhound nor ...