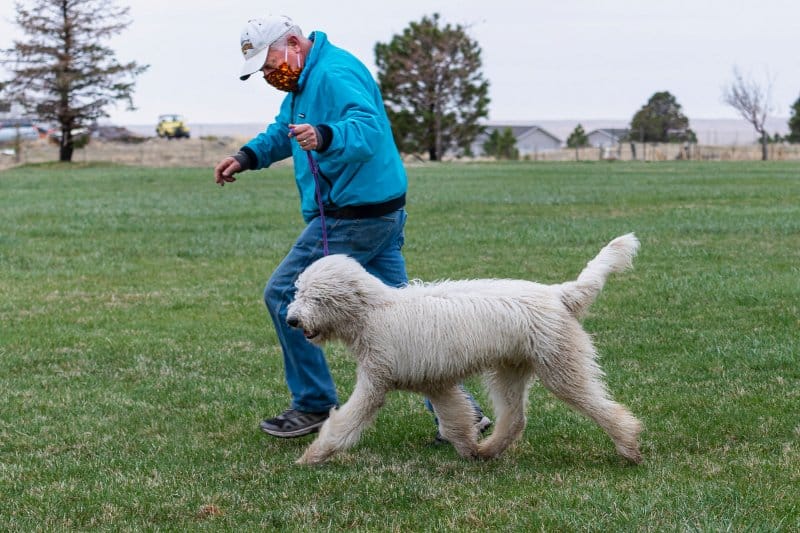 “While large size is important, type, character, symmetry, movement and ruggedness are of the greatest importance and are on no account to be sacrificed for size alone” and “Gait: Light, leisurely and balanced. The Komondor takes long strides, is very agile and light on his feet.”

Since the details of Komondor mass and proportions are hidden under their miraculous coat, many people (even breeders and some judges) think they should be more bulky than the athletic dog that can do the job. The Hungarian Kennel Club Standard offers more numerical proportion specifics than the AKC or FCI Standards. An enlightening percentage is that the chest width is ideally 28 percent of the height at the withers.

This means a 29- to 30-inch-tall Komondor is ideally 8.12 to 8.4 inches wide! That is a breadth that is more like a scaled-down Irish Wolfhound or a husky Doberman Pinscher (with a large head) than a Newfoundland or Saint Bernard. That same Hungarian Standard says the breed is “large and powerfully built.”

The AKC Standard says, “a large, muscular dog with plenty of bone and substance,” but this quantifiable proportion tells us what “plenty” and “powerful” actually means. Not bulky, not massive, the Komondor is a dog that (under the coat) has a body which can be “very agile and light on his feet” and is “rugged” but not lumbering. 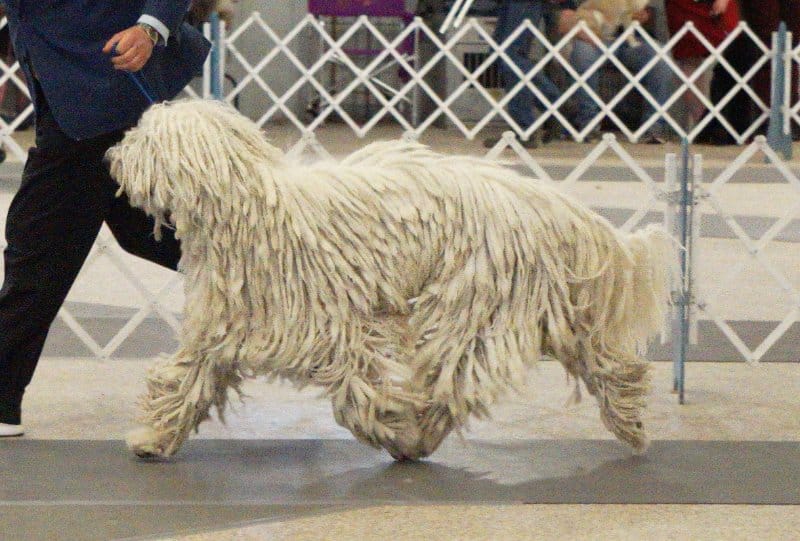 Judges should look for this athletic build under the Komondor’s coat and the movement that goes with it. But how can they, when, at any age, the coat obscures both the build and movement of the Komondor?

Let’s imagine the husky, heavy-headed Doberman mentioned previously. When the Doberman stands in front of us we can see his angles, proportion, and breadth of body. Can we “see” these with our eyes closed? Of course, we can. Reach down and find the dog’s withers. Leave your right hand there and slide your left hand down the point of shoulder, while you are there find the nearby pro-sternum and gauge the width between the points of the shoulders, right & left. You now have “discovered” the shoulder angulation and breadth of the chest of the dog. Continue down one leg to the elbow and determine the angle and length of the upper arm. The elbow should be right under the hand you’ve left at the withers and the depth of chest should reach to there also.

If the dog is a Komondor, you could not see this through the coat, but you now know the construction of the front and the proportional width of the dog. A good-sized Komondor male might be 29 inches tall. Was he about 8-1/4 inches wide? Good.

Similarly, you now know where the pro-sternum is, under the coat. With your right hand, go along the topline (finding the length of the rib cage and slope of croup along the way) and find the ischium. Now you know how long the dog is. Is he “slightly” rectangular as our Standard says? Is the rib cage about two-thirds of his length? That is what we want for a back which is “level and strong.” A strong topline won’t have a dip in the middle, even with heavy coat. 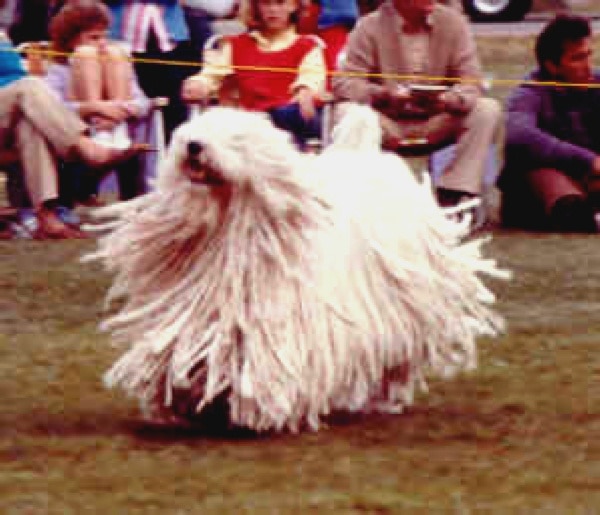 Not bulky, not massive, the Komondor is a dog that (under the coat) has a body which can be “very agile and light on his feet” and is “rugged” but not lumbering.

What does a “slightly longer” body-to-height proportion mean in a Komondor? Referring back to the proportions in the Hungarian Standard, the dog is optimally 104 percent in trunk length, with an acceptable range from 100 to 108 percent longer than tall. That is practically square! Again, we desire a dog more like that overly husky Doberman than a Newfoundland or Rottweiler.

Since the Komondor is a fairly regular dog under its unusual coat, we want regular movement, with balance and agility, and also what we describe as “light, leisurely, and balanced.” When we move our imaginary Doberman down & back and around, we can see every bone and what every foot is doing. When we move our Komondor, his coat is obscuring the dog and, even worse, might be swinging around and over the back in a distracting way. What can we see?

Both down & back and from the side, we can see the footfall of the dog.

That is what we want. From the front, is the footfall of the feet straight and parallel or slightly converging? That’s what we want. From the rear, can we see the pads coming up, nice and parallel? If you can’t see the pads, the beast is shuffling, not driving. That is not “light and leisurely.” It is just bad. If they are not parallel (with convergence) then the dog is unsound, cow-hocked, or the opposite.

A good Komondor is light on his feet and also demonstrates agility. The breed should be built to do that under the coat. The trick is seeing it through the coat. I’ve described the trick with the image of our imaginary Doberman. 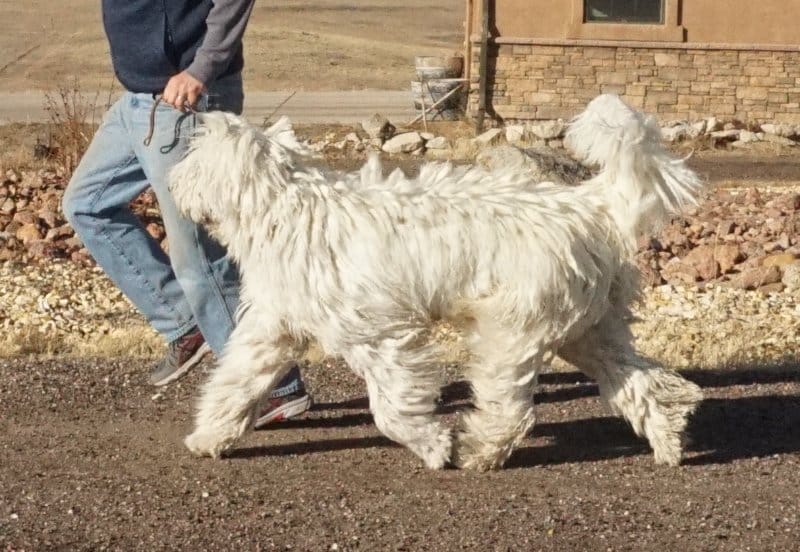 A good Komondor is light on his feet and also demonstrates agility.

Another part of the trick is to not be distracted by the motion of the dog’s coat. Komondors, Pulis, and Bergamascos all present you with this challenge. Focus on the feet as they hit the ground and you can win the challenge. It is even harder with black Pulis, because they are smaller and the view is black-on-black. Still, you can see what you need to see to evaluate the movement of these special dogs through their special coats. You will find that the good ones are very athletic. This is a good trait for a dog that must spring to his feet and defend his flock from predators.

Read and learn more about the intelligent Komondor dog breed with articles and information in our Komondor Dog Breed Magazine. 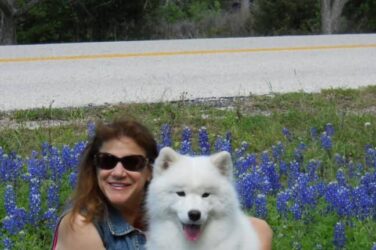 Interview with Working Group Breeder Joan Liebes - I purchased my first Samoyed and ...