I bet you thought this was going to be another article about Japanese Chin breed history, grooming techniques, or judging procedures. Since other fanciers have already addressed those topics in the past, I thought it might be fun to share some of the “inner secrets” about our special breed, from my perspective. So, with tongue firmly in cheek, here are some things you should know before acquiring one of these little imps.

Japanese Chin Have no Shame

I remember, 20 years ago while potty training my Cavalier King Charles Spaniel, Saffy, that I caught her in the act of peeing on the den area rug. In my best scolding voice, I admonished, “Saffy!” and hurried her outside to show her the right place to potty. Poor Saffy looked up at me with those soulful eyes and had a look of torment as if she knew she had let me down and would never do it again.

Don’t count on such luck with a Chin. I’ve caught my Chin peeing on the floor, gleefully trailing toilet tissue through the house, and pulling buttons from my tufted sofa. One of my dogs was so excited after tearing up the toilet tissue that he started running around the house, then scrambled back into the bathroom at full speed and jumped right into the toilet!

When catching my Chin acting up, I’d remember my effective training voice previously used with Saffy, and I’d say, “Penny!” or “Dottie” or “Magnus” or… (well, you get the idea) in my most shaming tones. However, on those occasions, my corrections would be met with either a selective deaf ear, a blank stare, or most often, a disgusted look as if to say, “Yes, what do you want? And how dare you
interrupt me!” I swear, if Chin had middle fingers, I think they would be flashing them at me regularly.

Just know that there was a dear price to pay to get that photo. You can be assured that for every good photo of my Chin that is published, I have taken 477 bad ones

A Japanese Chin could have made Helmut Newton look like a rank amateur. When photographed well, they are stunning; it’s just getting that elusive great photo that’s the challenge. We’ve all seen photos of a Toy dog proudly posed; head up in the air, tail proudly carried, all four feet in perfect position, and eyes intently surveying the horizon. And, at times, you’ve even seen a Chin in this very pose. Just know that there was a dear price to pay to get that photo. You can be assured that for every good photo of my Chin that is published, I have taken 477 bad ones! A Chin will stack perfectly, then, for no apparent reason, decide to squint right as the shutter closes; despite the clouds covering the sun. Or, the expression will be perfect, but just as the photo is taken they decide to twist their body, and their feet end up being splayed left and right like a ballerina’s.
Woe to the show photographer who has the challenge of taking a big win photo of a Chin with a co-owner staring over his shoulder saying, “Please take just one more!” He or she is in for a long afternoon!

It’s been said that every Japanese Chin comes equipped with his or her own personal, invisible pedometer. It numbers the total number of steps a Chin will take on a lead, usually in a ring, in its lifetime. Once it reaches that number, the Chin is done… no more steps to be had. If you’re lucky enough to get more steps after the pedometer expires, they are taken at the Chin’s will, pace, and pattern. Sometimes, mysteriously, the number of steps can be extended… but only if the Chin is given special attention, free from all other interferences. (You know, a Chin does not like sharing your affections!) But, more often than not, every Chin will revert to its wild, unattainable, spirit-animal and will never be captured again.

If you wear black clothes around a Chin, what was once a sleek shirt or sweater soon becomes covered in soft, white, Chin fur.

A Japanese Chin will soon teach you that your favorite clothing color is white, and that you should only buy leather upholstered furniture. When I acquired my first Chin, I loved wearing black shirts and sweaters, and my den was newly decorated with a lush couch upholstered in the softest of fabrics. Little did I know that my six-pound bundle of joy would not only command my personal attention, but would also direct where thousands of dollars in clothes and furniture purchases were directed. That’s right… Chin don’t want you wearing black, and they view any upholstered piece of furniture as a personal challenge to their ability to shed hair at the speed of light. If you wear black clothes around a Chin, what was once a sleek shirt or sweater soon becomes covered in soft, white, Chin fur. I’ve walked civilian (yes, non-doggy people are referred to as civilians in my home) guests to my front door and been aghast to see the back of their clothes covered in white fur. I’m sure many of them thought I was being awfully hands-y as I repeatedly rubbed their back and shoulders as they left my house, but what I was really doing was desperately trying to remove the Chin hair! And, after years of lint-brushing, vacuuming, wiping, and banging couch cushions outside, I finally gave in and bought a beautiful leather couch. Now all I have to do is wipe or blow the hair off of the cushions onto the floor where my Dyson Animal is waiting to vacuum it all up!

On a more endearing note, I have never met or owned a breed with a more unusual temperament and manner of expression. How many times have you heard a story of a new mom or dad (of either a human or a puppy) holding their baby for the first time and having those feelings of love at first sight? And so it’s been with other breeds I’ve owned, from German Shepherds to Lhasas to Cavaliers. Each of them joined (or were born into) my household and instantly wrapped my heart around their little paw. Chin, to me, are different. I’ve bought and bred Chin through the years. Every Chin I’ve bought has joined my household and been met with an honest, immediate, love; but, a love that grows in a most unusual way. I don’t find that Chin are typically instant bonders, or are particularly worried about impressing you or pleasing you. They have a quiet confidence, and while they are happy, they don’t give you all of themselves on the first day. As time passes, they become more and more enmeshed in the household and confident in their position, and that is when the real love kicks in. It’s a love borne of routine, trust, understanding, and tenderness. For every bit of those things you give to a Chin, you will begin to see returned tenfold. What was originally a new addition to the family is now a cherished family member with a permanent home.
I think that’s why you see so few Chin breeders place their older show dogs in pet homes. They are so much a part of the family that they are hard to let go.

Armed with this information, I hope you have a bit of fun insight into our special breed. The next time you see a Japanese Chin, give him or her a loving pat… but don’t wear black! 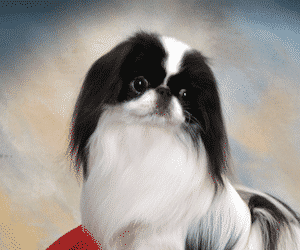 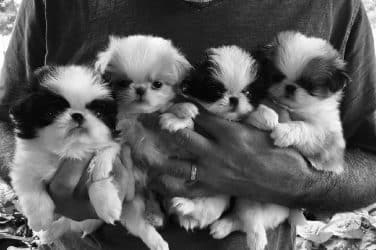 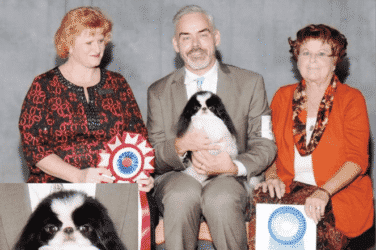