Ever since the first draft of the canine genome was released in 2004 using a Boxer named Sasha, a few tests for different traits, both desirable and unwanted, as well as tests for various hereditary diseases have become available to the public through several laboratories specializing in animal genetics.

Everyone realizes that genetics is an extremely complex science and that the majority of characteristics and conditions breeders attempt to manage in their dogs are produced by multiple genes and modifying factors that are extremely difficult to identify genetically. This, compounded by the diversity in structure and outward appearance of the many dog breeds plus conditions that are specific to one or a certain group of breeds, further complicates geneticists’ ability to isolate the genes that produce a certain characteristic. “46% of genetic diseases reported in dogs are believed to occur predominantly or exclusively in one or a few breeds.” (Patterson, D.F. 2000 Canine genetic disease information system: A computerized knowledge base of genetic diseases in the dog. Mosby-Harcourt, St. Louis, Missouri.) 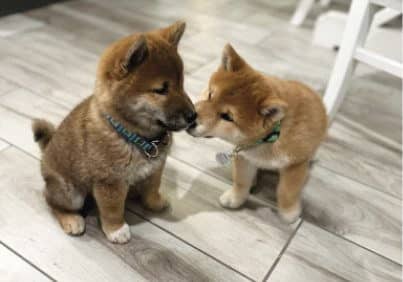 “However, the variation between dog breeds is much greater than the variation between human populations (27.5% versus 5.4%). Conversely, the degree of genetic homogeneity is much greater within individual dog breeds than within distinct human populations (94.6% versus 72.5%). Furthermore, in some breeds, genetic variation has been additionally reduced by bottlenecks associated with catastrophic events such as war and economic depression.” (Ostrander, Elaine A. and Robert K. Wayne. 2005. The canine genome. Canine Genome. Cold Springs Harbor Laboratory Press) In other words, what is genetically accurate in one breed, or many breeds, may not be true in all breeds but, because of controlled breeding, individuals within a breed are much more genetically uniform than humans from a specific region. Thus, each breed must be studied individually.

Once specific genes known to cause a certain characteristic or condition have been isolated, it is another step to offer testing for those genes to the general public. Genes affecting coat color and length are some of the easiest to quantify. It appears that most breeds have the recessive gene for long-coats. A long-coated Rottweiler may not be a fluffy dog like a long-coated Shiba, but the identified gene is the same in both (it appears that another gene may be involved in long-coated Siberians and Akitas, but it was not seen in Shibas) and several animal genetics laboratories offer tests for this gene. If a dog does not carry the long-coat gene, it is labeled LL where L is the dominant form of the gene. If it is a carrier but does not exhibit the long-coat, the dog is Ll where l is the recessive gene version. If the dog has a long-coat, the genes are ll. If an LL is bred to another LL, no long-coats and no carriers, Ll, will be produced. If LL is bred to Ll, no long-coats will be produced, but half, on average, will be Ll long-coat carriers. If Ll is bred to Ll (again extrapolated out over the population), out of four puppies, one puppy will be LL and not a carrier, two will be Ll carriers, and one will be an ll long-coat. The ratio of genes L or l that goes into a breeding is the ratio that comes out with approximately one in four expressing the recessive gene when both parents are carriers. If both parents are long-coats, ll, all offspring will be long-coated. It is easy to see how the long-coat gene can be passed down for generations and never be expressed; especially when many more offspring than any combination would ever produce is necessary to get the balanced ratios. For additional information on how this works, type “Punnett Square” into a search engine.

Actually, Shiba coat color is fairly simple compared to the vast array of possibilities for the Afghan Hound or Great Dane. Mammals really only have two coat color pigments, black and red/yellow. Everything in the Shiba, from red to sesame to black & tan to cream, is a variation on a theme. There are now tests available for what causes white socks or “pinto” markings in the dog, and these may even be a by-product of domestication, but that is a whole other article.

The black pigment in dogs is created by the Melanocortin 1 Receptor (MC1R) which in its dominant form, E, allows for black hairs on a dog, at least at some point in their lives, even if it’s just one black whisker. All Shibas have this except for the cream. In its recessive form, e, all black pigment is restricted. If a Shiba has two copies of the gene, ee, it becomes cream. Recent test samples on Shibas that are cream or cream producers show that Shibas that do not carry the recessive for cream are EE, those that are colored and have produced cream are Ee, and cream is ee. These findings are concurrent with a similar expression of the ee gene in Shar-Peis and Akitas. Dogs carrying the ee have no black hairs anywhere on their bodies, ever, but have black pigment elsewhere as seen in Irish Setters and Golden Retrievers. The intensity of pigment can range from Irish Setter red to Shiba cream.

The black pigment in dogs is created by the Melanocortin 1 Receptor (MC1R) which in its dominant form, E, allows for black hairs on a dog, at least at some point in their lives, even if it’s just one black whisker. All Shibas have this except for the cream.

Theories have been put forth, especially by Clarence C. Little (1957) in his book, The Inheritance of Coat Color in Dogs, regarding the genes that may influence the intensity of red pigment, but there are no tests available to determine this—yet. It is interesting to note, though, that Shar-Peis have both the dark red ee pigment as well as the cream variation with no intermediate shades like the Golden Retriever or Chow. Shibas do not appear to have the dark red ee, as they would have to be born red with not even one black hair, and only the creams do that. The ee red or cream color in dogs is not to be confused with the liver-pigmented red found in Dobermans and Vizslas. That gene does not appear to occur in Shibas, and always has brown points (nose, lips, etc.).

All Shibas have at least one black hair, except creams.

The other gene series expressed in the Shiba is the Agouti caused by the Agouti Signaling Protein (ASIP). The ASIP interacts with MCIR to create all the colors that we see in the breed, from red through black & tan. Although there are four known variants of the Agouti gene, recent tests by UC Davis Laboratories have shown only three in the Shiba. The most dominant is for the sable (Shiba people call it red) which is Ay. Shibas not carrying the black & tan recessive are Ay/Ay. It is common knowledge that black & tan is recessive to red, and it is designated at/at. Red and sesame dogs carrying the black & tan recessive are most frequently Ay/at, but the recent development of a definitive test for the black & tan recessive has allowed geneticists to determine if a dog has the wild, aw, gene by default. There is no definitive test for the aw gene and it is determined by process of elimination.

There is another gene in the agouti series for recessive black labeled “a” which is recessive to black & tan. This is not the dominant black seen in most breeds like the Labrador or Chow, but is the black of the uncommon black German Shepherd, black & white Sheltie, or the very rare black Samoyed or American Eskimo. The Shiba does not appear to carry the recessive a. The lab will test for the A series and look for the three things that are known, Ay sable, at black & tan, and a recessive black. If the dog only has one of these, then it is assumed that the other is aw, the wild color. Very few Shibas have been tested that are suspected of carrying the aw gene, but those that have been tested are aw/at sesames. By appearance, the aw/at sesames have a wider distribution of dark hair than the ay/at sesame, the dark hair extending down the bridge of the nose without a widow’s peak. It is also possible for a Shiba to be aw/aw, but no dog that has been tested has had that color. It is possible for a Shiba to appear to be sesame but actually not carry the at gene, as Ay/Ay, the gene for sable, allows for black hairs. Of course, if a dog has a black & tan parent, it will carry the at recessive.

Four cheek swabs were submitted to VetGen for testing, with the following results:

Although this is a small sampling, the genetics bear out what is seen in the Shiba breed. These basic coat colors and modifying factors that cannot be identified genetically at this time influence the expression of the genes. Nowhere is this more apparent than in the urajiro on the Shiba.

The lightened color on the undersides of many breeds is influenced by the Agouti (A) gene series and especially noticeable in those of red/sable coloring with a longer, double coat such as the Sheltie, Corgi, and Chow. It has been taken to a new level by selective breeding in the Shiba. The desire for a clear, almost white urajiro has created a look that is almost indistinguishable from the white markings found on a Siberian Husky and some Malamutes. The most obvious difference is that Shibas are not born with those markings but transition into them as a puppy matures, just as many wild animals, including coyotes, cottontails, and mountain lions have undersides that lighten with maturity. The agouti gene series, influenced by modifying factors both known and unknown, produces some of the widest variations in canine color.

A couple other things are worthy of note. There have not been enough tests done on Shibas to determine how many carry the aw gene, but it is probably not very many. So far, those that do carry the gene are descending from just a few dogs. At this time, there is no genetic evidence showing that black & tan Shibas would be more likely to carry the cream gene than the red ones.

Fortunately, for Shiba breeders, coat color genetics is easy, especially when compared to their cousin, the Akita (Greater Japanese Dog). With testing for the long-coat and cream genes readily available, people can test before breeding, to eliminate these faults, if desired, or even test puppies at just a few days of age. The use of the long-coat carrier to boost the thickness of offsprings’ coats (probably already being done inadvertently) or the cream to possibly intensify the red in sable offspring are controversial subjects and better addressed in open forums rather than in national publications. How breeders choose to manage these things are individual decisions, but at least the tools are now available for everyone.

Fortunately, for Shiba breeders, coat color genetics is easy, especially when compared to their cousin, the Akita (Greater Japanese Dog). With testing for the long-coat and cream genes readily available, people can test before breeding, to eliminate these faults, if desired, or even test puppies at just a few days of age.

https://jhered.oxfordjournals.org/content/98/5/544.full – The Genetics of Cream

https://nicholescritters.homestead.com/malcolorgenetics.html/ – Lots of Pictures and Colors to Boggle the Mind

https://www.kolumbus.fi/~w425013/link/canlinks.html – A Link with Many More Links 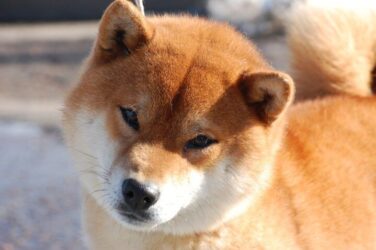 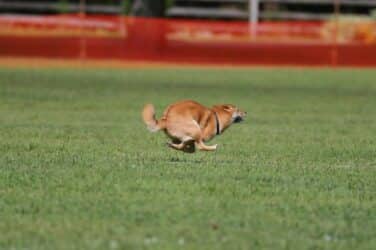 Shibas are very versatile dogs—more so than we often give them credit for being. ...