The Anatolian Shepherd Dog, Anatolian or ASD for short, is a working breed of Livestock Guardian Dog (LGD) that was created from regional subtypes of landrace Turkish LGD. They are used for the protection of livestock from predators such as wolves, bears, large cats, foxes, and stray dogs. While their primary charges in Turkey have traditionally been sheep and goats, they can generalize, and have been used to protect poultry, llamas, and alpacas, as well as other farm animals. Dog breeders living in rural areas have successfully used them to protect their Toy breeds from coyote and raptor predation. Because the breed originates from a landrace, and the breed parent club does have an open studbook agreement with the AKC so that new blood can be brought in from the country of origin, you will see a wider variance in acceptable type than might be the case in breeds with a closed studbook. It is imperative that you understand and keep the purpose of the breed as an LGD in mind when judging. Their working nature is of paramount importance and it has a bearing on every aspect of the breed, not just their behavior in the ring.

This is a breed that was selected for millennia to guard livestock. Let that sink in for a moment. People have been keeping small, hoof stock for thousands of years in Turkey, and they have used dogs to protect those herds. The selection process for weeding out dogs with inappropriate working potential has often been brutal, and the breed is a product of this harsh natural selection environment. Nothing about the Anatolian is extreme or superfluous to the breed’s purpose.

Despite having the word Shepherd in their name, Anatolians are not a herding breed. The breed name is a literal translation of the name given to them in Turkey, Coban Kopegi or Shepherd’s Dog. Herding dogs behave in a predatory fashion by stalking, barking and, sometimes, hard-staring or using “eye” to make livestock move where the shepherd wants them to go. Sheep and goats are prey animals, and as such they have a low tolerance for animals and situations that elicit a flight response in them. They are hardwired to move away from highly active, predatory behavior that makes them feel like they’re the next item on a
predator’s menu.

Picture a Border Collie; active, busy, a coiled spring ready to go off on its next task if you glance at them. Got that mental image? Now, imagine a dog that is the polar opposite of a herding dog in behavior; a large, unassuming, placid dog that can walk into a herd of agitated animals and, simply by being there, bring the “temperature” down.

Over millennia, Turkish shepherds took the dog—a predator—and selected for behaviors (lower prey drive, heightened suspicion, pronounced maternal instinct regardless of gender, extreme intelligence coupled with a profoundly independent nature) and turned it from a threat into an animal that would protect the flock and be a comforting presence to a herd of wary prey animals. This no-longer-predator is the foundation stock of the dog that is the Anatolian.

Whereas the Border Collie is a canine Swiss Army knife that can do almost anything well enough, and the Rottweiler is a multi-purpose farm dog that can bring in your cows, pull the cart with the milk to the sale, drive the beef to the butcher, and guard your purse on the trip home, the Anatolian is like a grapefruit spoon; he has one purpose in life, and that is to keep his livestock safe from harm. This purely utilitarian purpose (guarding livestock from things that would harm them) is the sole reason for the existence of the breed.

Reserve Around Strangers: The Canine Introvert

When you approach a herd that has Anatolians guarding it, you likely won’t see the dogs until they stand out from the flock and warn you away. They are roughly the same size and color as the sheep and goats they guard. They are masters of calm and blending in, and when you breed for working dogs, you select for dogs that are loathe leave home and herd. You, as a judge, want to see the same calm, reserved demeanor in your ring. Puppies will be more accepting of strangers and exhibit far less suspicious behavior than adults, but this “willingness to tolerate” novelty goes away with age.

Adult Anatolians will present a dour, sedate, even suspicious demeanor. Do not penalize a dog that does not want to be in the ring. An Anatolian that is made to leave its home and stock, and go out in public at the pleasure of its owner, is an unhappy dog and should not have this held against it. He is being true to his breed.

This is not a showy breed, like a Doberman. You will not see Anatolians gaiting down and back and then “nailing a free stack” with enthusiasm. You do not want to see that behavior, as a judge, because it is incorrect for the breed. The only time an Anatolian moves with speed and intent is when it has warned a predator off and the predator has refused to leave. The typical Anatolian reserve translates into a dog, in the best case scenario, that is generally indifferent to your presence and, worst case scenario, completely shuts down in the ring. Some dogs will be avoidant and may move away from you. As long as they do not menace you, and you can touch them, they should be allowed to stay in the ring. Let the handler show the bite (front only) and make your exam as brief as possible. This is not a breed that requires extensive touching. Watching them move should give you a pretty good idea of structure, and you can use the brief exam to determine if what you saw was, indeed, the case.

Bottom line? The Anatolian is not a “hail-fellow-well-met” sort of dog. He is the quiet guy, sitting by himself in the corner of a crowded room, watchful, aware of all the exits and how long it will take to reach them should the need arise. He is the one that will redirect a noisy bar patron (or a predator) who is behaving inappropriately and, if the miscreant fails to heed his warning, then he will show him to the exit with little extraneous fuss and resume his post in the corner. The Anatolian is easily overlooked in a ring full of boisterous Boxers, Dobermans, and Rottweilers, flashily posing for bait at the ends of their leads. He is silent when standing next to the woo-woo-ing Samoyeds and Malamutes. He is quiet, strong, and stalwart. These are the traits that have made him the frontline of defense for shepherds for thousands of years, and they must be viewed as absolutely critical to breed type.

A Coat of Many Colors (and Two Lengths)

The Anatolian comes in two coats; a short coat that is approximately one inch long and a rough coat that can be up to four inches long. It is a double coat, with heavier coat around the neck and shoulders and on the rears of the thighs.

Seasonal and regional differences will impact the amount of coat a dog carries. But no matter what time of year or location in which you find yourself judging, Anatolians should always have a double coat with a weather-resistant outercoat and an insulating undercoat. The breed is known for being tolerant of extremes of heat and cold in their working environment, and the coat is purely functional. Rough-coated dogs may have a heavy fringe on the ears and tail, and feathering on the backs of the legs. Both short and rough coats are shown in the same ring, and neither coat length is given preference over the other. The protective nature of the coat is what is most important.

Color is the least important aspect of the Anatolian. You may see any color and coat pattern except for merle. The merle gene does not exist in the breed. The most common colors you will see are fawn (with or without a black, blue or liver mask), white, and cream. Fawn will range in shade from a pale fawn, through yellow-golden, to red fawn. Coat patterns include brindle, pinto, and Irish or Dutch marked. Some dogs will also exhibit a darker overlay or sable pattern to the coat. As long as the coat is weather-resistant, the color and markings are immaterial. Remember, the coyote trying to make a meal out of your livestock does not care what color the dog is that is telling him to go grocery shopping somewhere else.

As a judge, you have a right to expect the dogs in your ring to be as clean as possible. Anatolians are a purely utilitarian breed and, as such, they should never be shown in an artificial manner. There is NO trimming to be done on an Anatolian, other than its nails. Dogs are shown in their natural state, whiskers intact, with no grooming products having been used. A good brushing is all that is required to have them ring ready. You are less likely to see overuse of grooming products when presented with owner-handled dogs. The only times I have seen dogs in the ring with obvious trimming and product use have been when they were being presented by professional handlers.

In short, you are looking for a large (not giant), solid, moderate, well-balanced dog with a quiet, calm, serious demeanor, either short- or rough-coated, and with fluid, functional movement. 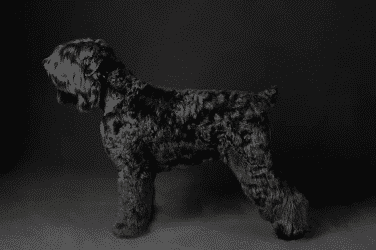 Why Are Black Russian Terriers Black?

The Black Russian Terrier is a very young breed, having been recognized as a ... 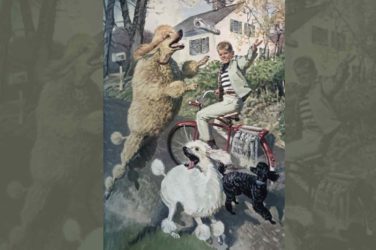 The very first words of the Chinese Crested Standard are “A toy dog, fine-boned, ...