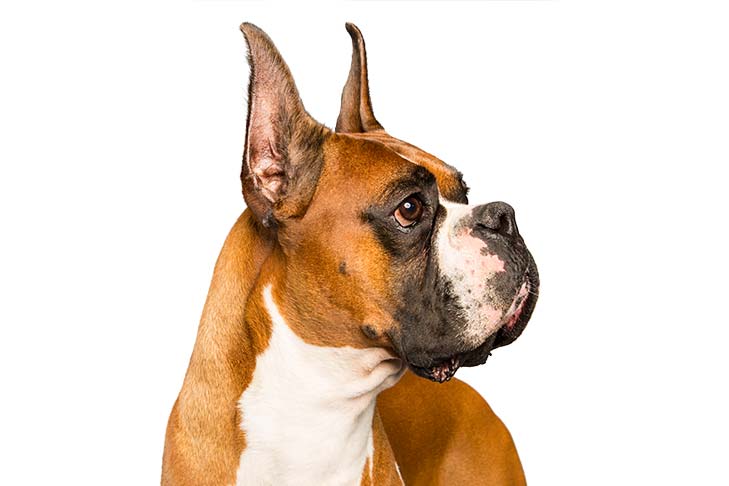 The Unsung Hero Award | A HERO comes in every shape, size, denomination, and SPECIES. They dwell among us, and we often don’t even realize how they impact our lives… until they do.

proof of the belief that “Man’s Best Friend” often has four paws and comes in fawn, brindle or white.

Each year, a committee chaired by Gail Karwoski (surfdomboxers@gmail.com) receives nominations from across the US for Boxers that have given exemplary service in many different genres for the Unsung Hero Award. A committee selects the winner for the year—but each and every Boxer nominee is a HERO. Some of the extraordinary canine recipients and nominees are shown here, proof of the belief that “Man’s Best Friend” often has four paws and comes in fawn, brindle or white. 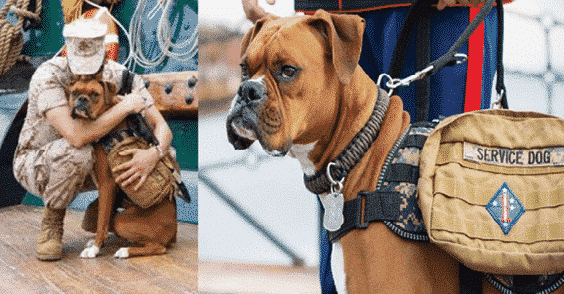 “Midas” was owned by Lance Cpl. Juan Valdez-Castillo. In a 2010 report, the Department of Veterans Affairs showed that there was an average of 22 suicides per day. After four deployments and several severe injuries, Juan retired and bought a family dog, a Boxer named “Midas.” As Juan says, “This dog was different, he would wake me up from nightmares.” Juan pursued training Midas as a Service Dog. Juan says, “Midas saved my life—it was a very dark time.” He gave Juan a new lease on life. Together, they went on a mission to promote the benefits of the positive healing that service dogs can contribute to combat veterans. Dogs on deployment ran the “Midas Cares Initiative” led by Midas and Juan to raise funds and awareness for the benefits of service dogs.

“Finn” was one of six puppies and was placed at eight weeks. By eight months, the family decided the puppy was too much and he was returned. His breeder worked with him and soon found that he responded well to positive reinforcement, and he soon started to flourish. An animal behaviorist needed a relentless dog that would not be put off by a young boy’s meltdown and screaming, and she needed a dog that was capable of interrupting and assessing injurious behavior. After training, Finn fit the bill. He was trained as a PTSD service dog and became Bryson’s service dog. He was specifically trained as a psychiatric service dog for Bryson, to interrupt self-injurious behavior, provide mobility support on stairs and uneven surfaces, bring him back to reality during a flashback, block him from crowds, and comfort him in time of need. Since Finn has been with him, Bryson has become a happy teen who has started to find his own voice and confidence.

“Karl” is the Courthouse Dog. When children become victims of abuse and are called to testify, it can be a very traumatic experience. The Orange County K-9 Circuit Program matches dogs with these children when they are on the witness stand. Karl provides companionship and courage in the courthouse. Karl was born deaf, so loud noises, and possible loud and angry voices, don’t bother him. Children like having Karl with them, underneath the stand. Most never see the leash wound around a brave child’s hand. As the child walks into the courtroom, he is not alone—Karl is right by his side. The child doesn’t fear, because Karl, with his blue hat and gentle demeanor, will protect him from the person who hurt them.

He [Sabiye] has performed 55 suspect tracks and 32 suspect building searches, as well as 20 SWAT applications. He has been credited with 22 suspect apprehensions. 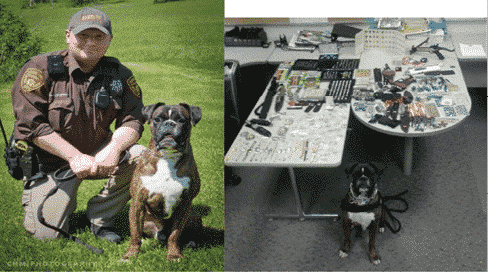 During his law enforcement career, K9 “Sabiye” had over 400 deployments for the Sheriff’s Department. He was certified as a Narcotic Detector Dog regionally and nationally. He was responsible for seizures of illegal drugs with a total street value of over $175,000 and drug-related cash seizures of over $40,000. He has performed 55 suspect tracks and 32 suspect building searches, as well as 20 SWAT applications. He has been credited with 22 suspect apprehensions. Part of K9 Sabiye’s duties include community education and public outreach, and he has been active as a working competition dog. An anonymous donor and the Bangor Middle School donated the funds to purchase Sabiye as a young dog, and nine years later K9 Sabiye received an award from the Wisconsin Professional Police Association for heroism in his role apprehending a dangerous suspect that Sabiye had located—even though Sabiye had been struck and seriously injured by the suspect.

Java did her very best to bring much needed smiles to the amazing people of Moore. Not only did she comfort the victims, she also cuddled with the Red Cross staff and gave local police her signature hug. 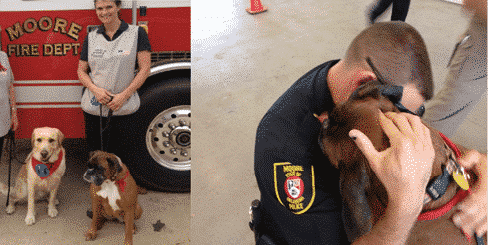 Disaster Relief Dogs, also called Crisis Response Dogs, work during active crises and in emergency situations. They offer a calming presence and a welcoming distraction to those who have been impacted by disasters. On May 20, 2013, a destructive EF5 Tornado struck Moore, Oklahoma, with peak winds up to 210 MPH, leaving a “giant black wall of destruction.” Seventy-five children and staff were present at Plaza Towers Elementary School when the tornado struck, and seven children were killed there. “Java” and handler Jodie Alwin traveled from Minneapolis, Minnesota, and spent a week at the Police Chief’s home, touring the damaged neighborhoods, community shelters, schools, command centers, and churches. They attended the funerals of the school children who lost their lives in the disaster. Java did her very best to bring much needed smiles to the amazing people of Moore. Not only did she comfort the victims, she also cuddled with the Red Cross staff and gave local police her signature hug.

Above are just a few of the Boxer Heroes that have impacted the lives of many people… they walk among us.

The Official American Boxer Club Standard reads, in part, under Character and Temperament: “Deliberate and wary with strangers, he will exhibit curiosity, but, most importantly, fearless courage if threatened. However, he responds promptly to friendly overtures honestly rendered. His intelligence, loyal affection, and tractability to discipline make him a highly desireable companion.” 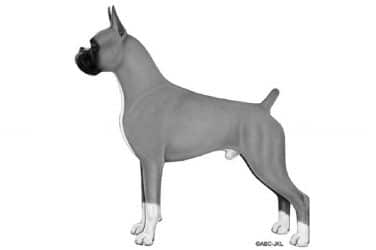 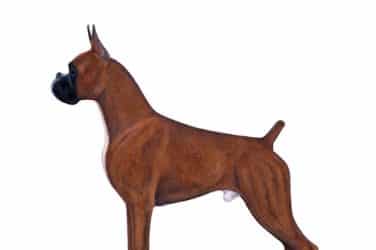 American Boxer Club Visual Standard | Whether new to purebred dogs or a longtime ... 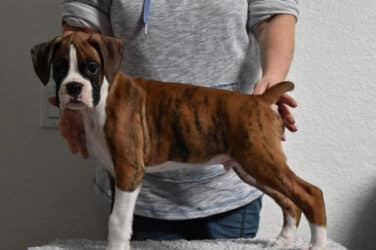 Bonnie Wagaman is the breeder behind CinniBon Boxers. Read about the kennel's beginnings, champions ... 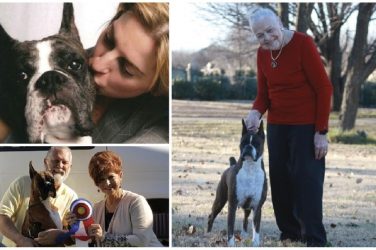