Griffon breeders and AKC judges are undoubtedly familiar with the breed standard. It explains the structure, physical characteristics, and temperament of the Griffon. It is the standard against which Griffons are measured in the conformation ring. But, the Griffon was bred for a working purpose and it fulfills that purpose in its own unique way. How it does its work in the field is defined by the working standard.

By way of example, the working standard describes the ideal gait of the Griffon as a gallop. This differentiates the Griffon’s running style from the Bracco and Spinone Italiano, both of which require trotting as their primary way of moving while hunting. The Griffon does not hunt, point, or have a running style like these breeds. Similarly, Setters’ and Pointers’ conformations differ from that of the Griffon as do their working styles and characteristics in the field. The style of movement, head carriage, pointing, and working of scent vary from breed to breed.

Sir Robert Martineau of France wrote: “Breed style in the field, like the conformation breed standard, is an indisputable and inherent characteristic of the breed that the Clubs and the breeders have the duty to maintain.” (1973 Bulletin, Club du Griffon Korthals). Similarly, in 1978, J.M. Pilard, a French field trial judge, told the members of the Club Français du Griffon D’Arrêt à Poil Dur Korthals that the Griffon has a distinct way of hunting, with a style differing from those of the Brittany, German Shorthaired Pointer, Setter or Pointer. He noted that field competitions allow the work of a breed to be evaluated and maintained, just as conformation shows permit the evaluation of the dogs against the conformation standard and the maintenance of the standard. Pilard predicted that a dog’s adherence to the typical working style or standard of its Sporting breed would increasingly influence the judgments and placements in field trials. 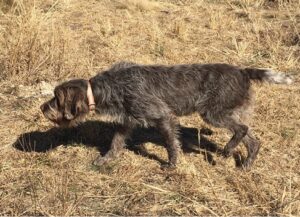 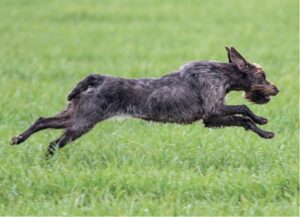 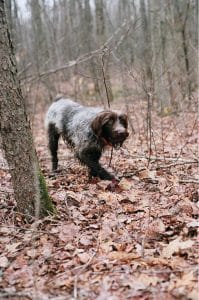 In 1984, the Korthals Griffon breed club in France appointed Jacques Kerspern to write the working standard for the Griffon. About his efforts, he wrote:

“Just as the conformation standard defines the essential points of the morphology of a breed, the working standard proposes to determine the fundamental characteristics of a working dog in hunting situations. These characteristics can be seen in the study of pace, the gait, and the style of the dog during various successive phases of its action in the field. Some will say that the Griffon is, above all, a hunting dog and that in the field only efficiency counts. It is true, undoubtedly true for a dog, for your dog, but when it comes to the breed, the problem is very different. The standard not only defines but it is also the guarantee, the guardian of the breed and of its conformation and working specifics.

It is essential to maintain and to guarantee what makes a breed unique, not only in its conformation, but also in its hunting aptitudes. It is crucial to remind one of the importance of field events in this endeavor. The study of the working style or the pace is not done by starting with a preconceived model that may exist or be idealized, but rather according to observations of numerous Griffons at work. Objectively, this observation leads to the discovery of certain elements that we can find among most Griffons and that constitute the true constants of the breed and its style. In addition, it is important to try to find an explanation for these constants, which find their origins in the dog’s conformation. For this reason, we can conclude the absolute necessity to never dissociate the conformation standard from the working standard.”

The Working Standard for the Wirehaired Pointing Griffon

The working standard of the Wirehaired Pointing Griffon (the WP Griffon) follows from the breed conformation standard to define the specific manner of the WP Griffon in the field.

Quartering: In searching for game, the WP Griffon quarters the field or area. The distance of the cast when quartering is not related to the dog’s physical conformation, but rather is about the dog’s mental state, hunting passion and training. The WP Griffon’s cast must extend laterally and may be extensive, but only in so far as the dog remains under the handler’s control. The cast varies with the terrain and cover being hunted.
The Gallop: The WP Griffon’s general running style is a gallop. The body seems to rock slightly back and forth—from front to rear—around the imaginary transverse line running through the WP Griffon’s center of gravity, which is estimated to be at stomach level. The gallop should be energetic but also sustained and steady. Avoid gallops that are too vigorous, overly excited or agitated; the dog must maintain self-control. The rocking motion may vary with the nature of the terrain and cover being hunted and is more pronounced when the dog is tired. The correct gallop is a function of the dog’s conformation. The WP Griffon’s long topline is held taut to favor propulsion. The WP Griffon’s well laid-back shoulder and long thigh promote vivacity and the bend of hock provides flexibility. The WP Griffon should have an easy and supple gait.
Speed: The WP Griffon’s quartering should be fast, lively and sustained. However, the speed should be of the type of continental dogs, meaning that the WP Griffon does not gallop as fast as a pointer or a setter.
Head Carriage: The head must be held at least in line with the back. The head is carried slightly forward with the nose slightly tilted downwards, causing the head to make an angle with the neck; this is referred to as the “hammer” head carriage. This head carriage provides the ability to scent at a distance. When a dog catches and is working a scent, the nose is held high.
Handling Scent: When it first catches game scent, the WP Griffon lifts its nose; then it will slow down, stop quartering, move into the scent cone, and lift its head in the direction of the game’s location. It will advance carefully but decisively, its legs bending progressively, crouching close to the ground. This phase is very stylish. 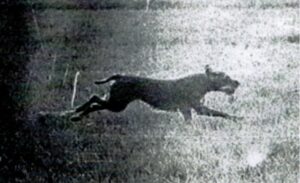 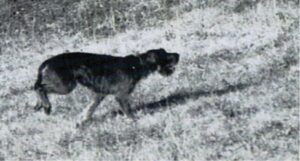 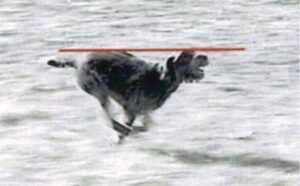 Pointing: The point should always be rigid. The desired posture for the point is a flexed position: the body is low, the head and nose are in line with the back, the body is tense and rigid, the neck is extended, the legs are bent or crouched, and the tail is rigid and motionless. A point achieved from a full run may be a standing point and is called “short” because the scent has not been well worked. A point with the dog lying down is not acceptable, except in the case of a surprised point when the dog catches scent while turning.
Coulé*: When the WP Griffon is moving in toward the game after the point is established, the desired motion, or coulé, is catlike. The approach is crouched, nearly creeping, the neck always taut, and the nose raised. This is the highest expression of the WP Griffon’s style. The coulé should not be jerky, nervous or fidgety.
The Tail: The tail should remain still and not wag when the WP Griffon is on point. Wagging generally indicates a point on which the birds are not pinned or the birds are not in line with the dog’s nose. Movement of the tail is a fault that must be penalized. If the tail is undocked, it must be held still on point and a tail held high or that moves on point must be avoided.
Note: Hunt tests and field trials serve to identify the best representatives of the Wirehaired Pointing Griffon and bring them to the attention of breeders who desire to produce quality dogs—those sires and dams that preserve the best characteristics of the breed and the passion to hunt in the inherent style of the breed. When evaluating WP Griffons in a field competition or hunt test, top scores should not be awarded to a dog that has not worked the scent. Surprised or short points are less desirable than flexed points. In addition, top scores should be awarded to only those WP Griffons demonstrating the typical manner and working characteristics of the breed.

*Coulé is used in European field trials for continental pointing dogs. It is not common in training, trialing or testing the WP Griffon in the United States. It is the action of approaching the game that the WP Griffon should do without hesitation, smoothly, at the command of the handler and always in contact with the game. The movement should be fluid, like a cat stalking its prey. Both the dog and the handler move together, placing pressure on the game until it flushes. The dog must then be steady to flush, wing and shot. 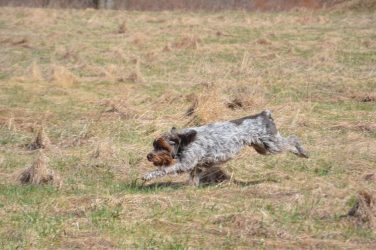 Form And Function Of The Wirehaired Pointing Griffon