The Nova Scotia Duck Tolling Retriever (Toller) was developed in the early 19th century to toll, lure, and retrieve waterfowl. So, what is tolling? “Tolling” is a Middle English word meaning to entice or pull. For example: “The tolling of the bells drew the villagers to the town square.”

To the hunter, this means to entice or pull the waterfowl within range by using the playful action of a tolling dog, much as a fox will lure ducks within range. In the wild, a fox will play along the shoreline to lure in waterfowl. The birds become curious as they watch the appearance and disappearance of the fox’s playful actions. The waterfowl are enticed to the shore where they become easy prey for the fox. Hunters, inspired by the success of the foxes, trained their dogs to mimic the action of the foxes by throwing sticks and rocks for the dogs to retrieve. The curiosity of the waterfowl as they watch the appearance and disappearance of the red dog’s playful actions along a shoreline causes them to swim in close to shore to more closely observe the dog.

In a hunting scenario, the tolling dog runs, jumps, and plays along the shoreline in full view of a flock of ducks rafting in the center of the lake. Aided by the hunter (either in a natural blind or a man-made one) the dog appears and disappears, as small sticks or a ball is thrown out into the open. The dog’s playful actions arouse the curiosity of the ducks swimming offshore and they are lured within gunshot range. The Toller is subsequently sent out to retrieve the dead or wounded birds shot by the hunter.

The Toller becomes a living decoy. Decoy dogs were used in Europe to lure ducks into nets, and as hunting companions since the 17th century, and in Eastern North America from the Chesapeake Bay to the Maritimes. Tollers, as we know them today, were developed in the community of Little River Harbour in Yarmouth County, Nova Scotia, around the beginning of the 19th century. The breed was originally known as the Little River Duck Dog or the Yarmouth Toller. The earliest records in Nova Scotia of hunters using dogs for tolling ducks is from the 17th century. The exact breeding origins of the Toller are not known. Possibly, Spaniel & Setter-type dogs, Retriever-type dogs, and farm Collies may have gone into the mix. It is likely that the breed can trace its origins to the now extinct St. John’s Water Dog and the Dutch
tolling Kooikerhondje. 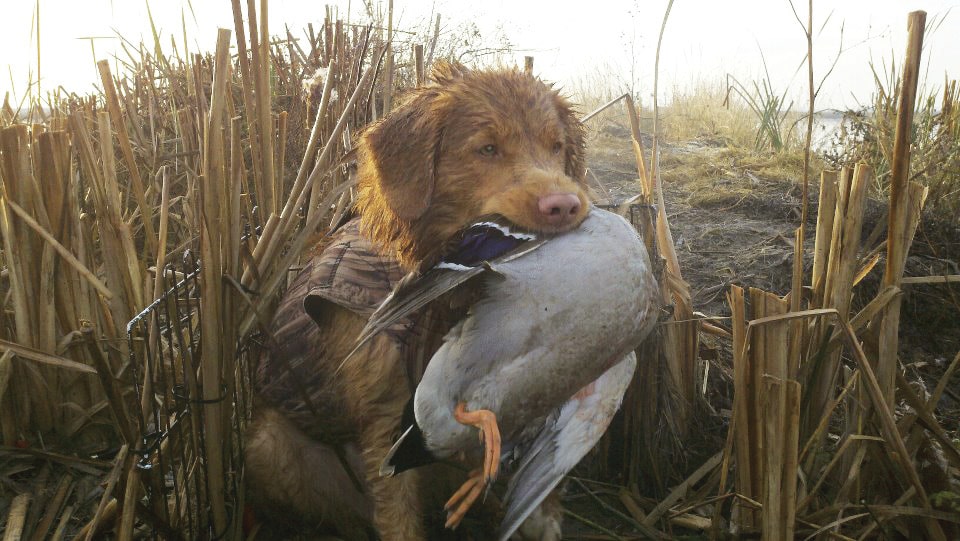 The Nova Scotia Duck Tolling Retriever Club (USA) holds the belief that Sporting breed dogs, such as the Toller, should demonstrate the basic instincts and traits necessary to adequately execute the tasks for which they were bred. In the late 1980s, the Nova Scotia Duck Tolling Retriever Club (USA) instituted its own test designed to evaluate the innate working abilities of the Nova Scotia Duck Tolling Retriever (Toller). The name of this test was the Natural Instinct Test. The purpose of the test was to establish that a dog possessed retrieving instincts; “to reveal the presence or absence of innate ability, not the strength of that ability or the dog’s trainability.” The test was later renamed the Basic Retrieving and Tolling (BRT) test in order to clarify that some training was required, although the purpose of the test remained the same. Most of the entrants would be young dogs with very little training. While the BRT satisfies the field test requirement for obtaining a club championship title, the BRT is, in itself, not a breed title.

The tolling retrieve is not necessarily a direct retrieve, and the dog may momentarily stop and play with the tolling object since it is Toller’s playful and rushing actions that attract the waterfowl. Occasionally, the dog may lose the object, which is acceptable, and the handler may throw a different object, but the handler may not leave the blind. It is also equally acceptable for the dog to make a more conventional direct retrieve. There should be no excessive delays between throws, and the lack of interest or desire after a few throws is a cause for failure. During the tolling test, no whistles or loud voice commands may be used to send or encourage the dog to come in, as in a real tolling situation this would startle the ducks being tolled. The dog may leave with the throw, and hand delivery of the tolling object is not required. The tolling objects may be a bumper, ball or stick. The handler may bring three objects to the line and they can be any combination of those three items. It is up to the handler to know what their dog will be most excited to playfully retrieve during the tolling test.

Watching a Toller that is eagerly tolling, and seeing it lure waterfowl to shore, is just magical. It’s very rewarding to see a breed still be able to execute the tasks for which it was bred. 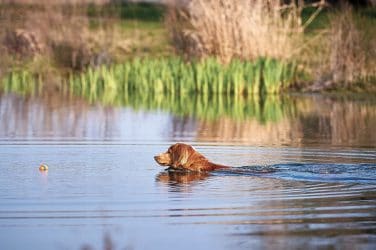 The standard of the Nova Scotia Duck Tolling Retriever temperament states: “The Toller is ...