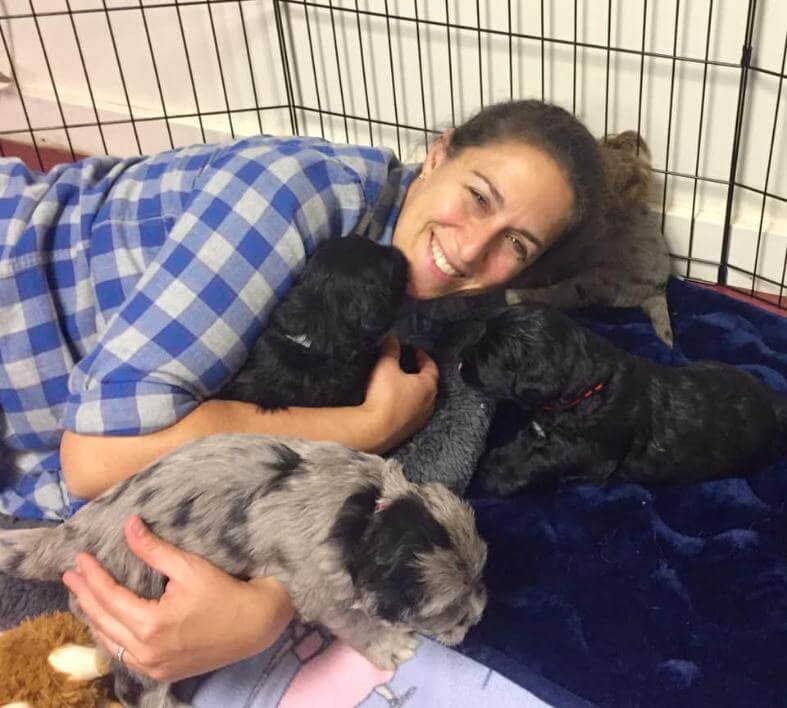 Where do I live? How many years in dogs? How many years as a breeder?
Jeanine Dell’Orfano: I live in Connecticut and have been involved with my breed, the Bergamasco Sheepdog, since 2005. I have been breeding Bergamascos for 16 years. Throughout those years, I have served as the former parent club President and I am currently the Founder and President of the Bergamasco Shepherd Association of Canada. I am an AKC Breeder of Merit and I am an Open Show judge, in the process of pursuing breed judging.

What is my kennel name? How many dogs do I currently keep?
Jeanine Dell’Orfano: We are Alp Angel Bergamascos and we have six Bergamascos that live in the house with us. They are a wonderful group of dogs that showcases different generations of our breedings.

Which show dogs from the past have been my noteworthy winners?
Jeanine Dell’Orfano: GCHS Alp Angel’s Faggia Dell’Albera CGC FDC has been our top-winning Bergamasco. She is the top-winning Bergamasco of all time and has been a Top 40 Herding Dog, is a multiple Group Winner, and has had around 50 Group Placements. She remained #1 in her breed for almost all of her five-year campaign, which was cut short due to COVID. She has won BOB at Westminster Kennel Club three times now. She accomplished all of this over her campaign while also taking time off for three litters. She was handled by Amanda Shea throughout it all.

Which have been my most influential sires and dams?
Jeanine Dell’Orfano: Obviously, “Faggia” has been our most influential dam and has produced really versatile offspring that are excelling and are titled in various dog sports, conformation, and herding. CH Ussaro Polskie Kudlacze FDC is our only breeding male. He was imported from Roza Palimaka in Poland. He has consistently produced puppies with great temperaments, good coats, athletic ability, and good OFA scores.

Can I talk a bit about my facilities? Where are my puppies whelped? How are they raised?
Jeanine Dell’Orfano: Our home is our facility. We do not have a kennel, as we keep our breeding program small. We whelp our puppies in our bedroom where they remain under our watch, but with mom, for the first three weeks because Bergamasco coats can smother infant puppies. We then move them to their “upgraded” space, which is full of enrichments, litter boxes, and crates. They get used to all of this early on and, weather permitting, they experience the outdoors and grass at four weeks old. We make sure that they get plenty of outdoor time daily and we raise our puppies using the Puppy Culture method during their time with us.

What is my “process” for selecting show puppies? At what age do I make my decisions?
Jeanine Dell’Orfano: I stack our puppies at four weeks, six weeks, and eight weeks. I take videos and photos to compare their development. I monitor their behaviors and reactions to new things and new people. At eight weeks, I video their movement and watch it in slow motion. I also have other breeders and our handler come to evaluate them. I ask the opinion of other breeders whom I trust to know this breed. I use all of this information when deciding which puppy has good potential for a show home. At eight weeks, I also bring them up to our barn to see our horses, goats, and chickens from a safe area and to monitor their reactions. This is important for puppies that will be going to working homes and farms. I place puppies according to their structure, movement, and temperament, and I match them to their families depending on needs and lifestyles.

How do I prepare my pups for the show ring? Does my breed require any special preparation?
Jeanine Dell’Orfano: Bergamasco puppies are very slow to mature, both physically and mentally. I like to enter them in 4-6 Month Beginner Puppy to get them acquainted with the show atmosphere. I like to get them used to road trips and walking on a lead. I shape their behaviors as tiny puppies so that I know how to get their focus and attention, and we go from there. We make it fun for them as puppies; like going to a show is the greatest thing ever.

Is my breed hand-stacked or free-stacked in the show ring? Why is it presented in this manner?
Jeanine Dell’Orfano: Either! There is no specific rule for how to stack them. Our handler, Amanda, likes to present our dogs both ways. Some Bergamascos do better one way or the other and some like to show off their free-stacks.

Are Performance and Companion titles important to me as a breeder? Are parent club titles?
Jeanine Dell’Orfano: Yes, to both. I like to get as many titles on our puppies as possible. I like to show off the versatility of our breed and the dogs we are producing. We try to get a CGC, FDC, and Herding Instinct Test on all of our dogs. We have a puppy living in Maryland, CH Alp Angel’s Moppi CGC TKI HT RN, who is now the first herding-titled Bergamasco in AKC. Our breed can be very good at agility, and we are actively involved in agility with our younger dogs. Many of our puppies also have Rally Obedience titles. The parent club does not offer any titles.

In my opinion, is my breed in good condition overall? Any trends that warrant concern?
Jeanine Dell’Orfano: Overall, yes, and I think it’s getting better. Our breed has had ongoing issues with hip dysplasia. It was so bad at one point that finding a passing dog was pretty rare. I think that some of the breeders who work together are making huge strides in the health of our dogs. The parent club rescinded the breed health statement at one point, but there is a group of us who continue to make health paramount. We are seeing more OFA-passing dogs now than ever before. The Breed Standard is currently being extensively revised, and this worries me. We have only been in AKC since 2015. An extensive revision hurts our small gene pool, in my opinion.

Is my breed well-suited to be a family dog? Who are the best candidates to own my breed?
Jeanine Dell’Orfano: For the most part, yes, most Bergamasco homes are families with children. I do like to warn families that they can be barky and are much more active than described online. They do require a lot of socialization and coat maintenance. I feel that the best candidates are those who are willing to understand the undertaking of raising a Herding breed and those who are willing to put in the time to train and work on the coats.

Do I feel that my breed is supported by a sufficient number of preservation breeders?
Jeanine Dell’Orfano: I think there are a few breeders who are doing wonderful things for this breed. I feel lucky to be among a wonderful group of people who are always collaborating, learning, studying our pedigrees, health-testing our dogs, choosing breedings based on the past as well as the future, and making well-informed decisions about those breedings. We are such a small breed and Bergamascos are so rare. It is imperative to have these kinds of unbiased, informed, and critical conversations with each other; and there are a handful of us doing just that and also working with the original breeders in Italy, the country of origin.

For a bit of fun, what’s the most amusing thing I’ve ever experienced with a Herding Dog?
Jeanine Dell’Orfano: It doesn’t have much to do with herding, but our stud, “Ussaro,” likes to raise puppies. He is in the whelping box from “day one” and will nurse puppies on his nipples. He gives the dam a break and will clean and evacuate puppies. He will sometimes even regurgitate meals for them. He is a wonderful sire to not only his own puppies, but also to any that are born in our home. He is patient and loving, and he helps to raise our litters until the day they leave. He is instrumental in teaching them how to play, when to rest, and he gives them confidence in new situations. Our puppies gain so much from him. His desire to be such an important part of their upbringing is a primitive and beautiful thing to witness.

Anything else I would like to share about myself? Any special message I have for all of us in the fancy?
Jeanine Dell’Orfano: I would like to encourage those who are interested in our breed to do their research before committing to a puppy. The descriptions online are often historically inaccurate and they can also make Bergamascos sound like unicorns. This breed is not for everyone, and I would encourage anyone who is considering a puppy to meet the breed in person first. Ask for proof of health-testing and learn all you can from different sources before committing to a Bergamasco. 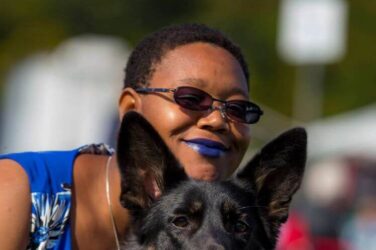 Interview with a Herding Group Breeder Jackie Short-Nguyen - I live in Western Pennsylvania. ... 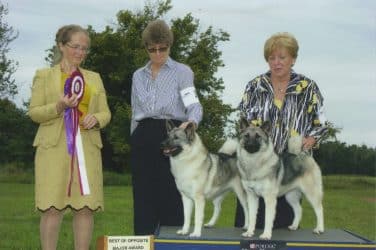 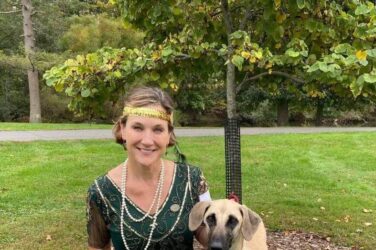 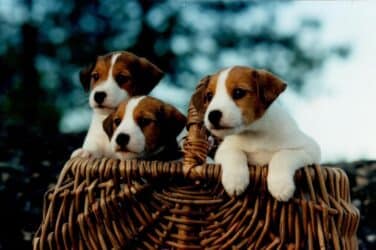 Mary Strom is the breeder behind Snow Wind Parson Russell Terriers. Read about the ...