Purebred Ibizan Hound | In Spring 2012, I traveled to Mallorca to deliver a puppy of my breeding to a local breeder and hunter, Toni des Clos, an adventure that was described in my article in the previous issue of Sighthound Review. A generous host, Toni arranged for my traveling companion, Erica Kasper, and me to fulfill a dream: watching the ca eivissenc—as the purebred Ibizan Hound is called in its homeland—hunt in the purest traditional way in its original terrain.

Toni is a proud steward of rural Mallorcan traditions; his family has been hunting with purebred Ibizan Hounds for generations. We went out with seasoned hunting packs; first, Toni’s pack of four, and then with his friend Tomeu Roca’s larger pack of seven to eight. Tomeu’s dogs won the national hunting championship in 2011, and Toni’s “Dama” and “Clenxa” won an island pairs competition, suggesting that we were in for an unforgettable experience, which Erica Kasper has captured in her wonderful photographs.

To improve my understanding of what I saw in the field, I drew heavily from the description of the breed’s unique hunting style in the 1987 book, Ca Eivissenc: L’Alternativa, by Miquel Elena Rossello and Charles Camberoque. Those desiring an original, authoritative account are directed to that matchless source. Many are familiar with the spectacular leaping so important to this breed’s hunting style, but there are some perhaps less dramatic aspects that are just as important.

Ibizans are primitive hunting hounds, appropriately placed in that category under the Fédération Cynologique Internationale (FCI). They detect, capture, and retrieve rabbits to hand with little substantial interaction with the huntsmen. In the United States, the purebred Ibizan Hound is placed in the Hound Group and described as a Sighthound, which is not the same thing as being a Sighthound in the sense of a coursing hound, although they do share significant traits. The terrain, which the rabbit has perfectly adapted to, is varied and challenging: stands of trees, dense vegetation, and stone walls; remnants of a bygone time, interspersed with rugged, semi-open areas at best.

The selection of traits to function in such dense terrain, where the rabbit goes quickly to cover, has evolved over hundreds of years: “Principal breed characteristics are a keen sense of hearing, ability to leap, and above all a great sense of smell,” said the early Spanish standard of 1930. Scent is foremost in detection, then hearing for stirrings in the dry vegetation and pack interactions; finally, sight steps up in the “senses triumvirate.” It could be argued that the importance of scent in Ibizan function has largely been overlooked outside the land of origin, and perhaps more emphasis should be placed on tracking and nosework in performance activities here.

The rabbit is easily unsighted, disappearing into the dense vegetation, in which case the dogs add vertical jumps to their arsenal. Briefly suspended in air, they listen and look in order to continue pursuit. While suspended in this way, the dogs can actually change direction in mid-air. This is in addition to spectacular leaps and jumps to overcome obstacles during pursuit.

At times, stillness and silence are key components in captures from close cover. At all stages, which dog vocalizes and when is regulated by a strict protocol. In photos showing the dogs in full speed, they may be responding to the cry of “Come here!” rather than being right on a rabbit. Capture frequently occurs in close proximity to cover, not just when in full open pursuit. The dogs hunt as a team with clearly defined roles. The drama ends with a dog retrieving the rabbit to the hand of the huntsman.

Tomeu and Toni hunt in the areas of Santanyi, Ses Salines, Sa Punta, and Campos in the southwest region of the island, which are a heartland of hunting tradition for the breed. Hunting lands are sometimes owned but are often leased, and most of the hunting occurs on familiar areas that the hunters and their dogs know well.

We met Toni and his older son at their home and drove to Sa Punta to hunt on his friend “Tia Sa Punta’s” land. Toni’s pack is an average size of five, with the typical single male, “Rapit.” Ages ranged from around two to eight years. The matriarch of Toni’s pack is 8-year- old “Dama,” who, along with 4-year-old “Clenxa,” he deemed his best. Dama is the dam of the siblings Rapit and his sister “Turque.” Then there was the Irish red wire “Ratja.” All of the dogs we saw were unregistered, and it is still true today that the vast majority of cans eivissencens throughout their homeland are unregistered. The purebred Ibizan Hounds exported from Spain to the United States are generally closely related, coming from the few breeders whose three-generation pedigrees have the L.O.E. (Libro de Origenes Español, or Book of Origins) number issued by the Real Sociedad Canina España (R.S.C.E.), a member of the FCI, which means registrations are acceptable by AKC.

The coats ranged from smooth and wire to a suggestion of a mix of these. Toni said the most important selection quality was hunting ability, but he admired the short, hard coat, though not all hunters agreed. The wire and longer smooth coats of his dogs he attributed to their ancestor “Faro,” the handsome Irish-marked red wire male featured in Alternativa photos.

Young and impetuous Rapit, the typical single male in the pack, was not present on this hunt. He had been vocalizing—or not—at inappropriate times, a distraction to the other dogs that can result in loss of the rabbit. Since then, Toni told me Rapit has rejoined his team. Ibizans do not bark simply to release the stimulation of the excitement; even in the heat of the pursuit, it is the lead dog who signals with the voice. The bark or call conveys information by the dog with the best information. It is doubtful that a highly excitable or reactive temperament would work in this context.

Toni maneuvered his little sedan as deeply into the area as possible, opened the trailer, and at that moment the hunt began. We saw no leashes; the dogs are controlled verbally. Methodical and tenacious use of scent is highly appreciated—and Dama was a pro. The dogs spread out in an animated but not excited manner. They may begin with a dry, cold trail until a fresh one is revealed, leading to where the rabbit may be in deep cover, or in walls, not so much burrows, in this terrain.The Alternativa states that the alert bark is for hearing or seeing the rabbit and is disruptive and never desired for just finding a hot trail. 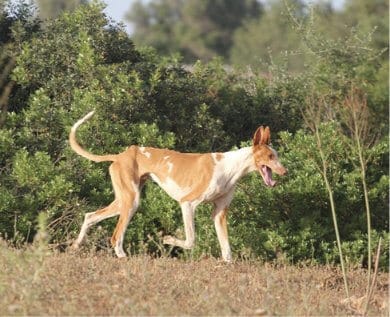 If the rabbit is detected in or pressured into cover, the lead dog will alert and then attract its pack mates, not by continuing with a specific alert vocal sound but rather by its body language. While awaiting help, the lead dog maintains a still, high-alert, “point-like” pose, with the exception of the wildly expressive, high tail. The pack then arrives to assess the situation and take strategic positions around the cover area, remaining still with the exception of extreme tail movement. Otherwise, the dogs are all silent. We witnessed this repeatedly on our outings. If the rabbit decides to bolt, the dog nearest the exit point will assume the lead. If it remains in cover, I will use the term “honor” in the sense that the pack honors the lead dog that will initiate the next move. This is a suspenseful and entertaining part of the hunting and one where the dogs are listening for any movement of the rabbit within the dry cover. Throughout all of our outings, all humans were careful not to be talking loudly or walking too heavily through the dry vegetation so as not to distract the dogs.

If the rabbit remains in cover, usually the lead (but perhaps another—but only one—who is confident of the position of the rabbit) will attempt to seize. Failing that, he will startle it from cover—a technique that those who live with this breed I think will recognize right away: The dog rises up and “punches” (my term!) down into the cover with its forelegs, and then may pin down and/or seize the rabbit with its jaws. If unsuccessful, a strategically positioned pack member will try to take the startled and pressured rabbit just as it exits cover. Alternativa states that about 25 percent of the captures occur right at the surrounded cover in this manner. If the rabbit escapes without the dogs’ knowledge, they abandon that area and begin to search again by trying to pick up the scent. I gained a deeper understanding that there is so much more to these amazing hunters than spectacular jumping and dramatic chases. 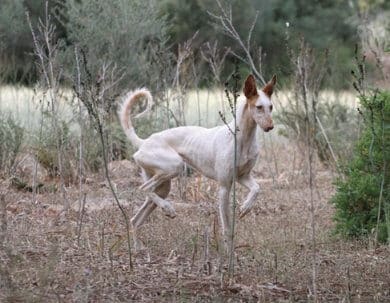 When the pursuit becomes more open, the pack assembles strategically to flank the lead dog, and the lead will alternate as the rabbit dodges or feints. From Alternativa, italic emphasis mine: “In chase the dogs do not run barking as hearing is still a significant factor.” A further point regarding hearing: Jumping over brush rather than attempting to go through or around is less likely to hide the noise the rabbit makes in running away. “The chase is the most spectacular phase of the hunting because high jumps of more than two meters over bushes or walls are very frequent,” the Alternativa reminds. Two meters is more than six feet, and this may account for the height of the dogs we saw, the smallest being mid-standard and most near the top. This may not be representative of the breed throughout its range in its homeland, but it was the norm here. 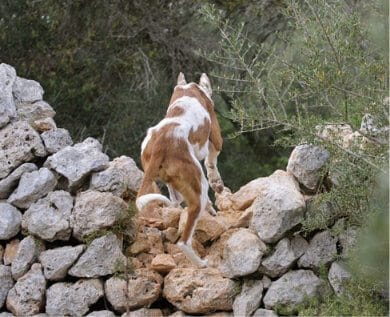 The dog is expected to promptly deliver the captured rabbit still alive, or at minimum undamaged, to the hand of its huntsman who usually dispatches it by breaking its neck and then rewards the dog with water and praise. We saw no deviations from Tomeau’s excellent pack, such as mauling, stealing or dropping the rabbit.

In a memorable sequence, Tomeau’s sole male was proudly proceeding to him with a capture. While he was still some distance away, the pack picked up another rabbit directly behind this dog and took off in hot pursuit. The arrest of a prey drive is no slight matter, but despite demonstrating temptation to follow, in the end the dog submissively retrieved the rabbit to Tomeau and immediately rejoined the pack. We felt we could read his mind as he made his decision: the right one. This really impressed me. This was the pack’s single male and he was a stand-out, with multiples of the five captures that afternoon. 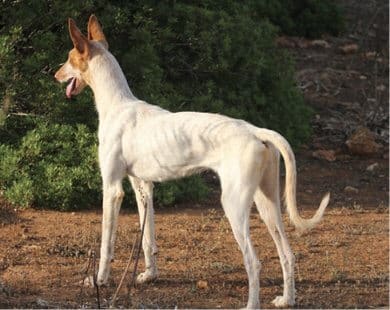 The exciting afternoon concluded with a return to the van, conveniently parked by a source of water. Again, without leashes, the dogs were directed back into the vehicle at the end.

My good fortune in meeting our generous cultural guide and host, Toni des Clos, is only equaled by my gratitude to him. Watching these dogs demonstrated to me what the Mallorcans have known all along: That a performance-based breeding program without papers, written pedigree or conformation championships can produce correct type and aesthetically pleasing dogs with proven working ability. The dogs are so perfectly adapted to their unique environment and primary prey, the rabbit (not hare), that, at best, we who are outside of these regions can only approximate selection based on working traits. It is humbling.

Reprinted from Sighthound Review with permission from the publisher. The number of wire-haired Ibizan Hounds being shown across the country has increased by ... The purebred Ibizan Hound’s temperament is often misunderstood among its more dignified fellows within ... 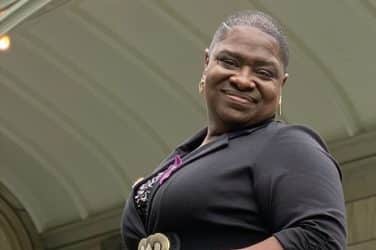