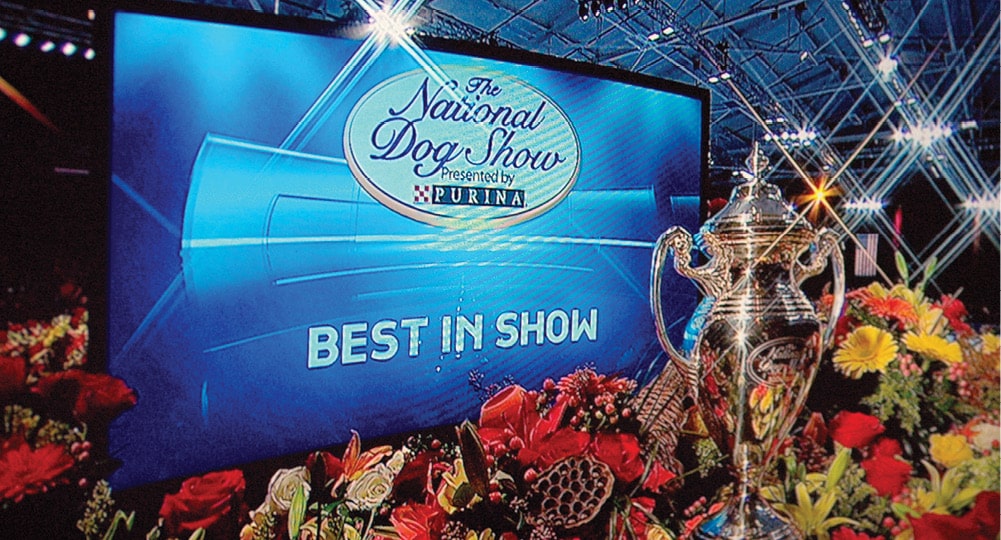 The National Dog Show | A Broadcast Bonanza for Purebred Dogs – The catalog for the American Kennel Club’s Centennial Dog Show and Obedience Trial, held at the Philadelphia Civic Center on November 17 and 18, 1984, includes the following excerpts regarding the club’s earliest beginnings: “On September 17, 1884, a group of dedicated sportsmen met in the rooms of the Philadelphia Kennel Club, at the northeast corner of 13th and Market Streets, Philadelphia, Pennsylvania. Each member of the group was a representative or “Delegate” from a dog club. Each of those dog clubs had held at least one benched show or field trial in the recent past… It is unlikely that the twelve individuals that attended the first meeting of what was to become The American Kennel Club had any idea of the impact that this meeting would have on the sport in this country… It is fitting that the celebration of The American Kennel Club’s 100th Anniversary culminate in the holding of a dog show and obedience trial in Philadelphia.”

In the years that followed the Centennial Show, the Kennel Club of Philadelphia found itself without a permanent home. The complex that hosted the nation’s largest dog show was sold, and the buildings—including Philip Johnson’s Convention Hall—were demolished to make way for a specialized medical facility of the University of Pennsylvania. In 1993, the show moved to the newly constructed Pennsylvania Convention Center, but the facility’s Center City location and its organized workforce proved problematic. As club President Wayne Ferguson tells it, the new hall presented special challenges for a dog club that needs to accommodate both Mastiffs and motor homes. “Handlers didn’t like it because of problems with rooms and parking and so on,” he says. “And it’s a union hall, by the way, which robbed us blind.” Wayne reports that the facility charged $21.00 per square foot just to vacuum the rings. “Of course, they insisted on doing it twice,” he discloses. “It was a nightware.”

With entries dipping below 1,000 for the first time in decades, the club needed to find a show site that worked for exhibitors and for the club. “I started to look for new places and found Fort Washington,” Wayne says of the Expo Center that was located near the Pennsylvania Turnpike. “We enjoyed Fort Washington for years, but then something happened with the management and they sold to a shopping center. So we got kicked out of there.” Finding himself in search of a suitable show site—again—Wayne had to relocate his Philadelphia institution out of the metro area. “We went to Harrisburg one year, and to Reading [Pennsylvania],” he points out. “We had four different sites before we finally got a home in Oaks.”

“The handlers love it, the exhibitors love it, and I love it,” Wayne asserts about the Kennel Club of Philadelphia’s current home at the Greater Philadelphia Expo Center at Oaks, Pennslyvania. Located just a few miles from King of Prussia, Pennsylvania, near Valley Forge National Historical Park, the center offers over 240,000 square feet on one level. The convenient site is massive enough to accommodate virtually any kind of event, even the largest of dog shows. “Our facility lends itself to every kind of event configuration, and our location central to Philadelphia’s five counties and the greater tri-state area allows for a large and varied audience within easy driving distances,” notes the Expo’s website. With acres and acres of paved parking, there’s plenty of room for handlers’ motor homes and countless mini vans filled with dog-loving spectators too. Inside, four adjoining exhibitions halls provide plenty of space for rings, benching, vendor areas and throngs of onlookers. “We’re just so happy to be where we are,” Wayne reports. “There’s no union and they treat us really well.”

With a new home secured, the historic dog club was about to enter the 21st century with help from a Hollywood blockbuster. In 2000, the Christopher Guest mockumentary Best in Show was released and caught the attention of a dog-loving television executive. “Jon Miller is the President of NBC Sports,” Wayne says of the man who envisioned producing a real life dog show modeled after a movie modeled on a dog show. “He and his wife saw Best in Show and Jon couldn’t stop laughing for two days. His wife enjoyed it even more.” Wayne explains that after seeing the film, the man responsible for bringing emerging sporting events to a television audience wanted to do something dog-related. “So someone [from NBC] contacted Purina, and Carson International [the event and production company] contacted me,” he says. What dog club president wouldn’t listen to what they had to say?

Wayne remembers the meeting he attended in New York as if it happened yesterday. “I went to meet with them at 30 Rock and they said they had it all planned out,” he recalls of their pitch to produce a Best in Show-style dog show. “They wanted to do a parody,” he explains of their offer to feature his club’s historic event as a made-for-TV comedy. “I didn’t know if Jon understood that he was meeting with the real club’s President,” Wayne says. (Movie goers may remember that the film’s fictional Mayflower Kennel Club was based on the Kennel Club of Philadelphia.) “We go back to 1878 and we’re steeped in tradition. We’re just not going to be able to fulfill your wish and make that dream come true in real life.”

Of course, TV executives have a way of turning “no” into a ratings success story. Only a week after that initial meeting, Wayne received a call from Jon suggesting that the two “roll up their sleeves” to help make one man’s dream another’s reality. After a bit of negotiating, things started to come together. Jon asked, “Would you guys be in tuxedos and could you promise us a lot of beautiful dogs?” The dapper and devoted President of the Kennel Club of Philadelphia responded by saying that he and his club could easily oblige. “So we worked out the details, and what you now see [on TV] is what we worked out at that first meeting,” notes Wayne.

Giving Thanks on Thanksgiving Day

The details came to fruition when the National Dog Show first aired in 2001 on Thanksgiving Day. The show’s audience of dog-loving viewers has been growing ever since. “We had 26 million people watching last year,” Wayne is pleased to report. “This year we’re looking for 28 [million].” Although the club’s actual dog show is held earlier in November, a tape-delayed presentation airs following the live broadcast of the Macy’s Thanksgiving Day Parade. A televised dog show could not have a better lead-in audience. According to Wayne, his club’s association with NBC Sports, Carson International, and Purina has been a positive experience for everyone involved. “We have a great team,” he asserts. Carson works on all the details to transform the Expo Center from an understated exhibition hall to a made-for-TV studio. “They set up the arena, bleachers, lights, carpeting, and flowers,” notes Wayne. “It’s a very important part of what they do and it’s all set up for NBC to arrive and for us to arrive.” Many of the show’s producers have become so committed to the program that they’ve even become purebred dog owners as a result. 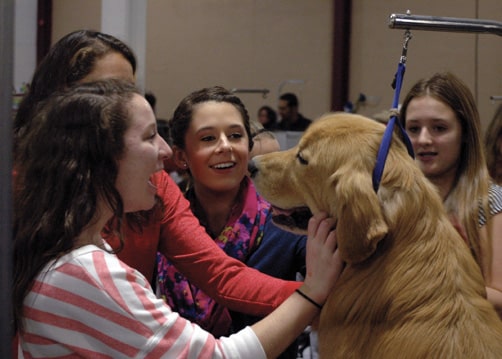 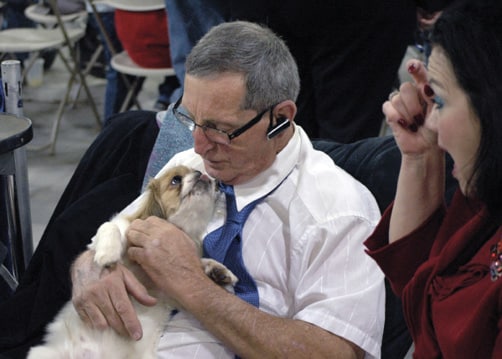 Once the cameras have been placed and the sound checked, it’s time to open the doors for the dogs—and spectators. Since the televised dog show has increased visibility for the sport, it has also encouraged locals to come out and visit. According to Wayne, “We have between 15-18,000 [tickets sold] for the two days.” As a special treat, the people who come to the show have a chance to meet the dogs that will appear on TV and talk with their breeders, thanks to the club’s commitment to a benched format. To some, a benched dog show is simply a relic of days gone by. But for the three that remain (Golden Gate in San Fransisco, New York’s Westminster, and the National Dog Show) it is the best venue for allowing dog lovers to get up close and personal with purebreds. “We still think [benching] is a draw,” Wayne insists. “People are interacting all day instead of rushing their dog out the door, into a motor home, and down the road.”

With so much exposure, the National Dog Show has allowed the Kennel Club of Philadelphia to thrive in an era when many dog clubs are cutting corners or folding up their tents. “NBC is very generous to us and so is Purina,” notes Wayne. As a result of this generosity, his club has been able to give away $110,000 to various organizations in just 27 months. And its members have plans for more philanthropy. “You’re going to be seeing some exciting things from the Kennel Club of Philadelphia as far as donations go,” he promises. Although the club’s historic show may never again reach its 1984 entry of 8,214, this year’s event is likely to bring more admirers to both the sport of dogs and the City of Brotherly Love. “This year, we’ve extended our entry to 2,300,” Wayne announces. “We have another hall to accommodate [additional entries] where we’ll have two rings and the benching. It would be wonderful to get well over 2,000 plus entries and go back to the old Philadelphia days.”

Dogs from the 50 States, Washington, D.C. and All Over the WorldWill Vie for ... 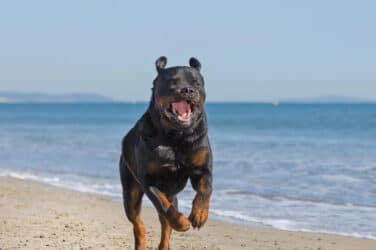 How the Quality of Your Dog Affects Your Win Rate

If you have a better dog, you can win more, right? But there are ...