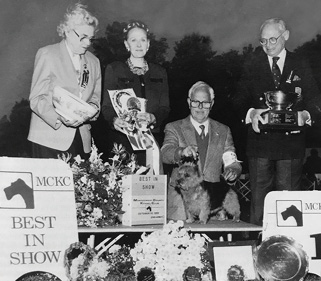 Members of the Montgomery County Kennel Club will once again host Terrier fanciers from around the world at their one-of-a-kind event. Nestled among the bucolic hills and dales of Southeastern Pennsylvania, “Montgomery” remains a fixture on the calendar for serious Terrier folk and anyone else who can appreciate a show where the breeding of purebred dogs is still celebrated. Most breed winners at this event also become National Specialty winners on the day, and the show’s top dog often finds itself well-positioned for a February victory in New York. (Eight Montgomery winners have also been Westminster winners.) More exclusive still is the list of Terriers that have gone Best in Show at Montgomery twice. Since the first show was held in 1929, only six dogs have managed to double their winnings at the Greatest Terrier Show on Earth.

The first two-time Montgomery winner was an imported Welsh Terrier owned by Mrs. Edward P. Alker of Great Neck, Long Island. Ch. Toplight Template Of Twin Ponds was bred by Mr. Laurie Bell of Leeds, West Yorkshire, in the heart of the U.K. A winner of four Reserve Challenge Certificates in his home country, the black-and-tan enjoyed far better luck on this side of the Atlantic. Handled by Mrs. Alker’s kennel manager, John Goudie, “Template” was considered a “dark horse” when he beat the immortal Boxer Ch. Bang-Away Of Sirrah Crest at the Yonkers Kennel Club in 1951. (Incidentally, it was at this show that a future Westminster winner, Ch. Rancho Dobe’s Storm, was first entered.) The upset must have sparked a fire among the fancy, for the Welshman quickly added a Best in Show win at Westbury to his credit, a feat he repeated the following year. In 1952, Mrs. Alker’s import went all the way to the top at Montgomery for the first time under Richard A. Kerns, Jr. The dog’s second Montgomery win was awarded the following year by George H. Hartman. In 1953, the Welsh Terrier’s career was topped-off with a monumental win at Morris and Essex under Anton B. Korbel from an entry of 2,612. Template had achieved immortality alongside Mrs. Alker’s other greats. Together with the 1944 Westminster winner, Ch. Flornell Rare Bit Of Twin Ponds, and Ch. Twin Ponds Belle, a Group winner at the Garden in 1949, Ch. Toplight Template Of Twin Ponds helped to establish the Welsh Terrier as a real contender in the ring against all competitors.

(BELOW – John Goudy handled Ch. Toplight Template Of Twin Ponds to two consecutive Montgomery victories. The Welsh Terrier is pictured here with judge Anton B. Korbel at Morris and Essex in 1953. Photo by Shafer.) 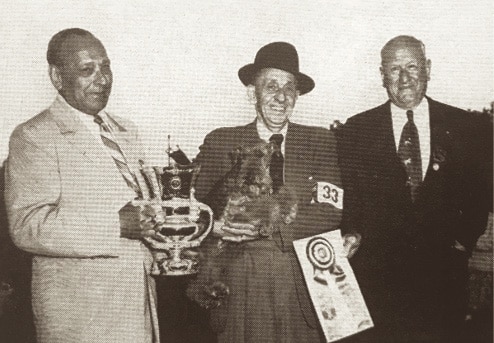 One of the top-winners of the 1960s, Ch. Carmichael’s Fanfare established an enviable record not only for Terriers, but among all breeds as well. Bred by Ruth Johnson and handled by John P. Murphy for owners Mr. and Mrs. Charles C. Stalter of the Barberry Knowe Kennels in Woodcliff Lake, New Jersey, “Mamie” won 32 Bests in Show. The silver brindle bitch set an incredibly high bar through a series of important back-to-back wins. She was awarded consecutive Bests in 1963 and ’64 at the Ramapo, Somerset Hills and Westchester Kennel Club shows. Montgomery too was doubly lucky for the Scottie. In 1963, John T. Marvin awarded her Best in Show at the Terrier classic. Cyrus K. Rickel had the honor to do so the following year. To say that the Stalter’s show girl was hot throughout the Swinging Sixties would be an understatement. In 1965, the four-year-old dominated the floor at Westminster where Robert A. Kerns awarded her Best in Show from a field that included another fan favorite. Among the finalists that year was the defending champion and top dog of 1964, Ch. Courtenay Fleetfoot of Pennyworth, handled by Bob Forsyth for owner Margaret Newcombe. Unfortunately for the English-bred Whippet, the two-timing Scottie just couldn’t allow “Ricky” the pleasure of a repeat performance. After all, back-to-back wins was Mamie’s stock-in-trade.

As America pursued an ambitious space program to put a man on the moon, one breeder of Miniature Schnauzers seemed to get caught up in the excitement. Emanuel F. Miller of Noblesville, Indiana, produced an influential family of Miniature Schnauzers during the ‘60s that included several notable winners with decidedly lunar names. The Mankit dogs were linebred on Dorothy Williams’ influential sire, Ch. Dorem Display. A “Display” daughter, Ch. Gladding’s Bie Bie, became the kennel’s foundation bitch. From Bie Bie, Mr. Miller produced a family of Schnauzers whose accomplishments could not be eclipsed. Ch. Mankit’s Moon Shot sired five champions, including the top-winning Ch. Mankit’s Signal Go. Wayne Miller of the Trayhom Kennels handled the dog to Best of Breed at Montgomery in 1964, ‘65 and ’66. “Signal Go” was the sire of 21 champions, including the top-producing Ch. Mankit’s Xerxes whose champion progeny also numbered 21. The kennel’s most famous winner was Ch. Mankit’s To The Moon. In 1968, Mr. Miller’s young hopeful swept through the entry of 92 Schnauzers at Montgomery to win the breed from the classes under Heywood Hartley. James A. Farrell, Jr. awarded the 14-month-old Best in Show to finish his title. The following year, Robert J. Moore gave “To The Moon” the breed win from an entry of 115 and John T. Marvin awarded him Best in Show for the second consecutive year. (Picture at top of article)

Two Scottish Terriers have enjoyed back-to-back victories at Montgomery, and both celebrated winners were of the fairer sex. Bred by Luis F. Arroyo of New York City, Ch. Brookhill’s Morning Edition is Montgomery’s second Scottish two-timer. Handled by Peggy Ozorowski Browne for owner Marjorie Carpenter, “Lola” seemed destined for success in Pennsylvania from the start. In 1989, she was Winners Bitch and Best of Winners under Neatha Robinson who awarded John and Barbara DeSaye’s Ch. Sandgreg’s Foxmoor the Breed. (“Foxmoor” won three National Specialties and is the sire of Ch. Koch’s Shadow Fox of Glenlee, granddam of the 1995 Westminster winner Ch. Gaelforce Post Script.) In 1990, the all-rounder Michele Billings judged Scotties at Montgomery and selected the Carpenter-owned bitch as her breed winner. The Canadian all-rounder R. William Taylor gave her the nod for Best in Show. The following year, Anne Rogers Clark sent the Scottie to the Best in Show ring where the Italian judge, Giuseppe Benelli, rewarded her for a second straight year. (Benelli co-owned the 1975 Crufts-winning Wire Ch. Brookewire Brandy of Layven with Paolo Dondina who judged Best in Show at Westminster in 2011.) In 1992, Lola capped her stellar career with a Group Two at Westminster behind the top-winning dog of 1991 & ’92, Ch. Registry’s Lonesome Dove. The Group judge at the Garden that year was Michele Billings. 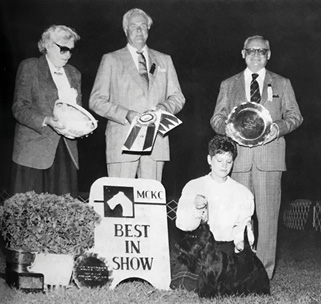 The partnership of Ruth Cooper and Peter Green was rewarded frequently at Montgomery. In 1980, the team enjoyed their first victory when the Norwich Ch. Thrumpton’s Lord Brady was awarded Best in Show under Robert J. Moore. Five years later, the pair celebrated their second win at Montgomery when Henry Stoecker awarded Best to the Wire Fox Terrier Ch. Forchlas Cariad. In 1986, Margaret A. Young did the same for another Wire, the unforgettable Ch. Galsul Excellence. The Cooper/Green Team’s final Montgomery winner proved to be the partnership’s most enduring. In 1992—and again in 1993— their alliance was rewarded at Montgomery through another exceptional Norwich, this one co-owned with Patricia P. Lussier-Forrest of Lake Placid, New York.

Bred by Karen Anderson, Ch. Chidley Willum The Conqueror was a grandson of “Brady” through his sire, Ch. Royal Rock Don of Chidley. “Willum’s” first Montgomery win came about under the practiced eye of AKC Chairman and interim President Louis Auslander. Sandra Goose Allen welcomed the black-and-tan to the winner’s circle again the following year. In 1994, Walter Goodman selected Willum as his choice for Best in Show at Westminster. Just four years later, a daughter of “Don” repeated the win for owners Alexander and Glorvina Schwartz. In 1998, Peter Green handled their Ch. Fairewood Frolic to victory on the Garden floor. The Best in Show judge that year was Montgomery County’s Show Chair, Dr. Josephine Deubler.

The most recent two-time Montgomery winner may well be remembered as the greatest show dog the world has ever known. Ch. Torums Scarf Michael was bred in the U.K. and shown to many wins in Great Britain by his breeder, Ron Ramsey. The exciting Kerry Blue Terrier was awarded Best in Show at the last five English shows in which he was entered. Following his victory at Crufts in 2000, four-year-old “Mick” embarked on an American odyssey that would be unbelievable if it weren’t true. Guided in the U.S. by Bill McFadden for owner Marilu Hanson of Newton, New Jersey, the import went straight to the top at the 2000 Great Western Terrier Association of Southern California. This was the Kerry’s first show in the States. The team next headed East to attend the revived Morris & Essex Kennel Club show held at Giralda Farms in Madison, New Jersey. At this highly anticipated event, the Kerry Blue was awarded Best of Breed from the classes by Anne Katona. The Hon. David C. Merriam judged the Terrier Group and sent Mick on to Melbourne T. L. Downing who finished the dog’s American championship by awarding him Best in Show—in the dark of night. At Montgomery a few days later, Australian H. Peter Luyten awarded Mick Best in Show. The following year, Alessandra Sommi Picenardi of Italy repeated the win. In 2001 and 2002, Mick won the Group at Westminster and established himself as the number one dog all-breed both years. In 2002, his mythology only intensified when Connie Barton awarded the Kerry Blue Best in Show at the AKC/Eukanuba Invitational. Not to be outdone, Mick also won each of the country’s largest shows that year. (The total number of dogs he defeated at just the top half dozen events equaled 22,525!) Still, a Westminster win eluded the living legend. This situation was remedied in 2003 when Irene Biven rewarded Mick in the company of one of the finest collections of purebred dogs that has ever been assembled anywhere in the world. 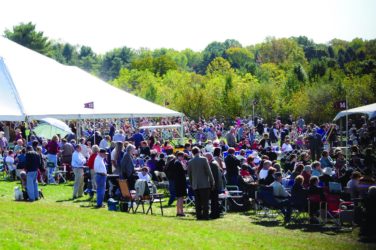 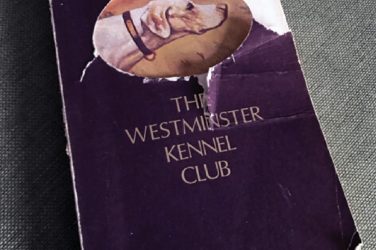 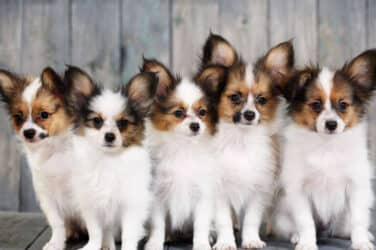