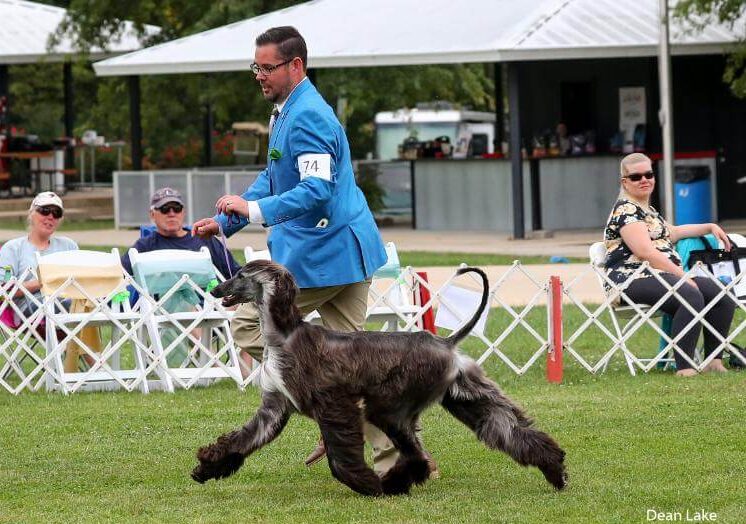 Few spectacles in the purebred dog world engender the feelings of wonder and fascination evoked by the vision of an Afghan Hound at a trot. For those of us who love the breed, the majestic (almost magical) vision never gets old. Athletic, aristocratic, and indelibly unique, the proper movement of the Afghan Hound can, unfortunately, be one of its most misunderstood characteristics. This need not be true. As a coated breed, the Afghan Hound’s movement may require more scrutiny than some others, but a careful reading of the Standard clearly illuminates what we should be looking for.

The AKC Breed Standard for the Afghan Hound has remained unchanged since 1948. This is a badge of honor for the longtime breeders of yesterday and today who have devoted their lives to protecting and preserving this ancient breed. Breeders, exhibitors, and judges owe it to our forebears to stay true to this cherished document.

Our Standard says the following about the breed’s gait:

“When running free, the Afghan Hound moves at a gallop, showing great elasticity and spring in hissmooth, powerful stride. When on a loose lead, the Afghan can trot at a fast pace; stepping along, he has the appearance of placing the hind feet directly in the footprints of the front feet, both thrown straight ahead. Moving with head and tail high, the whole appearance of the Afghan Hound is one of great style and beauty.”

Let’s take a closer look at what this paragraph asks for—and how it is too often misinterpreted. If you were to ask a group of dog fanciers to describe the hallmarks of Afghan Hound movement, many of them will likely use the word “spring.” But note: The only time this word appears in the Afghan Hound’s Breed Standard is in the first sentence of the section regarding movement, in which it refers to the gallop, not the trot.

While not necessarily the focus of this article, a basic understanding of the double-suspension gallop is important when evaluating any sighthound. The double-suspension gallop is a four-beat gait marked by two moments of complete suspension when all four feet are off the ground. While galloping, the spring comes from the loin which must be flexible to allow complete and fluid expansion and contraction. Some of the breed’s unique features—the prominent hip bones, large feet with thick pads, and square proportions—evolved to allow the Afghan to work in the harsh and varied terrain of its native land. The breed is required to hunt large game in regions ranging from rocky mountains to more arid desert climates.

The breed is required to hunt large game in regions ranging from rocky mountains to more arid desert climates.

Now let’s consider the Afghan at the trot, which is the gait we can evaluate in the show ring.

“When on a loose lead, the Afghan can trot at a fast pace…”

I’m not sure who decided to include the phrase “on a loose lead,” but they have always been a personal hero to me. Nothing is as beautiful as an Afghan that can carry itself with dignity on a totally slack lead. When judging, I never hesitate to ask exhibitors to loosen the lead, and when judging Junior Handlers with Afghans, I consider a loose lead to be an absolute requisite element of breed-specific presentation. As for the fast pace, the Afghan does have a faster trot than many breeds, but we must remember that it is not a race! Often, a good handler will know that moving the dog at excessive speed can mask some soundness faults.

I encourage the reader to look at video footage from the 1940s through the early 1960s. The Afghan Hound Club of America has a YouTube channel with great historical footage of such legends as Sunny Shay, Kay Finch, and Lois Boardman showing their dogs. You will see that these iconic ladies took a more casual approach to speed as they presented their dogs with pride. Times do change, of course, so what worked in the 1950s may not work fully today—but perhaps a happy medium can be achieved?

“Stepping along, he has the appearance of placing the hind feet directly in the footprints of the front feet, both thrown straight ahead…”

The importance of the above sentence cannot be overstated! It very clearly illuminates the proper footfall of the breed, implying agility, rhythmic foot timing, and most importantly, soundness! When viewed from the front, the Afghan should reach toward you with the legs as straight columns of support. With the feet kept in line with the body, thrown neither in nor out, there should be no evidence of crossing over, paddling, or flipping the pasterns. The elbows should be held close to the body.

Viewed from the rear, we should see the hind feet placed in the footsteps of the front feet. Thereshould be strong drive from the rear, allowing the pads of the hind feet to be clearly visible. As in the front, the feet should travel straight ahead and in-line with the body. Any evidence of cowhocks or moving too wide or too close should be faulted. Although not clearly stated in the Standard, there is a tendency for the footfall to converge toward the centerline, as with many breeds, under the Hound’s center of gravity as speed increases. The degree of convergence should match, front and rear.

The side-gait is the Afghan’s crowning glory on the move. Balance and soundness are key. A well-made, balanced Afghan will have the same silhouette on the move as it does when standing still. The frame is hard and athletic, with the topline held solidly on the move. The gait is not the low “daisy-clipping” gait of the Greyhound or Whippet. The proper gait is powerful, but smooth, effortless, and perfectly synchronized. The Afghan should give the appearance of floating around the ring with purposeful, forward motion and a hint of springiness, giving the appearance that it is, at times, hanging in the air—in a word, ethereal.

The movement should give no suggestion of bounce, which is wasted motion. For this, watch for unnecessary vertical movement of the topline. Reach and drive should be balanced, front and rear. Pay particular attention to the flexion of the hock joint at rear extension, as any evidence of sickle hocks or a stiff joint is a significant fault. When the rear foot comes back under the centerline of the dog, it must NEVER overstep the front foot. Such overstepping is a key indicator that the exhibit lacks balance. The topline must be carried level. Hipbones higher than the withers are a fault, but what I would consider a “typical” fault. Toplines that slope from withers to hips are grossly atypical and very faulty.

“Moving with head and tail high, the whole appearance of the Afghan Hound is one of great style and beauty.”

This final sentence speaks for itself. The Afghan Hound is the “King of Dogs,” and as such, should move with pride of race and dignity. The head should be carried high, but should never be ewe-necked or thrown too far back over the topline. It has, instead, a high, forward carriage as the dog moves with purpose.

The tail is an indicator of the temperament and should never be carried below the level of the back when in motion. It should be carried high, providing balance to the neck and head, but not forward over the topline, and certainly not bouncing on the back.

The Afghan Hound in motion is a living, dynamic work of functional art. Breeders, exhibitors, and judges are encouraged to carefully study the movement called for in the Breed Standard and develop an understanding of how this movement is derived from the history and function of this ancient breed.

Unfortunately, the Afghan Hound is a breed in which faulty movement can be quite eye-catching and exciting. The glorious coat can add an additional challenge to judges trying to evaluate movement. It is sometimes necessary to step back and ask if the flashiest dog in the ring is the one that most closely fits the Standard, and therefore, most able to fulfill its purpose. Always remember that style and soundness are not mutually exclusive, and when they occur in one package it is truly a spectacle to behold.

Are you looking for an Afghan Hound puppy?

Want to help rescue and re-home an Afghan Hound?

Read and learn more about the elegant Afghan Hound dog breed with articles and information in our Afghan Hound Dog Breed Magazine.

What Makes a Pug? Round Head, Square Body, Curly Tail 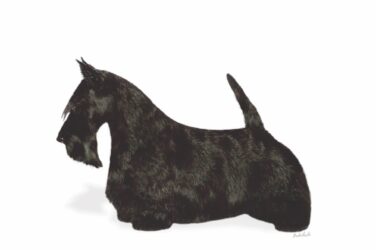 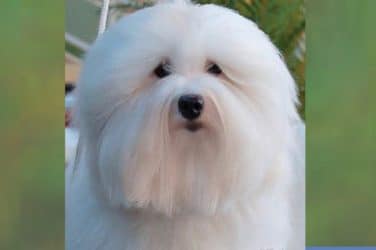 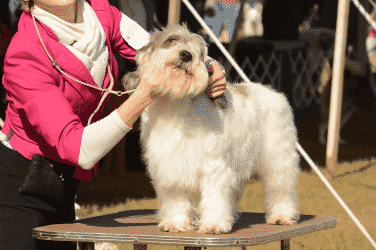