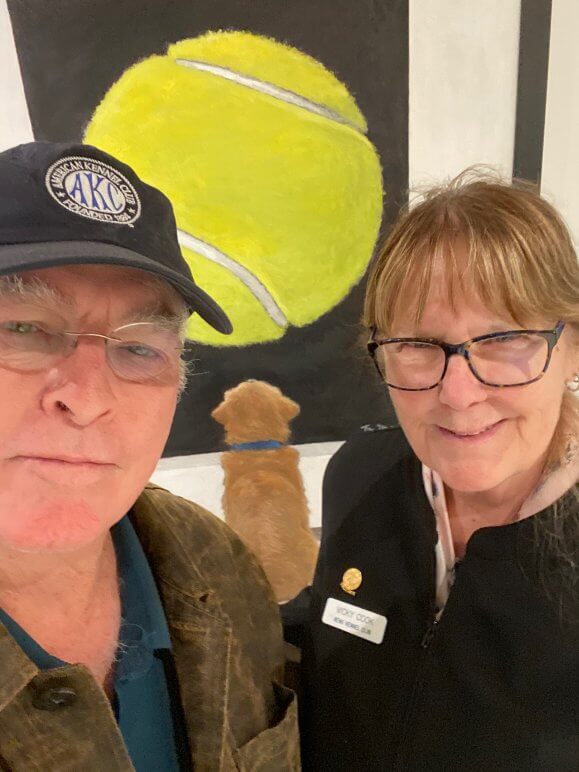 Where did each of you grow up?
Warren & Vicky Cook: We were both born in California. Warren was raised his whole life there, while Vicky, whose father was a pilot for Flying Tiger, was moved around often, before finally settling back in California. Vicky’s first dog was an “Eskimo Dog” that her father traded for a bottle of whiskey when flying in Alaska. Warren’s first dog was an Afghan Hound that later gained its championship, CDX, High in Trial Hound and a Best in Show; a learning experience for both he and the dog. We first met at a dog show while exhibiting our Afghan Hounds, and subsequently became “dog show buddies.”

Do you come from doggy families? If not, how did the interest in breeding and showing purebred dogs begin?
Warren & Vicky Cook: We were both dog show “newbies.” Vicky fell in love with Afghan Hounds while on campus at San Jose State. She saw one running loose that ran into a fountain—suddenly, a lovely dog with really skinny legs! After that, there was never any discussion—Vicky was intrigued with the Afghan Hound and purchased her first while still in college. Warren had originally wished for an Irish Wolfhound while in college, but then strolling around the benching area at the Golden Gate Kennel Club show, he found some lovely and aloof Afghan Hounds, with a sign on the benching that said puppies were available from Shirley and John Handley in Los Altos, which was minutes from where Warren lived in Palo Alto.

Who were your mentors in the sport? Please elaborate on their influence.
Warren & Vicky Cook: For Vicky, Betty Stites and Louise Merril. They explained the reality of dog shows, and the gamesmanship that ensues. Betty was a great teacher. The Handleys taught Warren the seemingly non-obvious differences that can make one dog a show dog and another not. What they all emphasized was that dog show judges are human, and that breeder-judges will often either over-penalize or overly forgive elements of a particular dog, depending upon issues they, as breeders, are dealing with in their own bloodlines.
As for our experience in Salukis, we were married in 1974 and purchased our first Saluki in 1978 from an Afghan Hound and Saluki breeder, Betty Richards of Camri fame. That is when the love affair began. Our exposure to the remarkable Salukis of Dr. Jo Ann Van Arsdale, Chubasco Salukis, and her smooths resulted in an obsession with the breed, its history and its preservation.

The Santana Salukis are widely known, highly successful and well respected. What breeding philosophies do you adhere to?
Warren & Vicky Cook: We have maintained two lines of Salukis: Jen Araby, from Wayne and Marlys Jensen, and Desert Bred Salukis from our Chubasco line, bred from Dr. Van Arsdale to a Saluki bitch imported from the first Desert Storm by a soldier and owned by Lynn and Jim Green in Texas.
In order to be able to register the Desert Breds, there is a process. Our Dual Champion (Open Field champion and AKC bench champion) dog was bred to the import, resulting in Generation One. A Dual Champion dog was bred to a bitch from Gen 1 to produce Generation 2; then a bench champion was bred to a Gen 2 to produce Generation 3. All this was done under the auspices of the Society for the Perpetuation of Desert Bred Salukis, a domestic registry recognized by the Saluki Club of America, which is an AKC Member Club. At each generation, including Generation Zero (the import), an evaluation of the quality of the dogs was made by evaluators approved by the SPDBS: a performance expert, an established and recognized breeder, and an AKC judge, before the dogs were allowed to be registered by the domestic registry. At Generation 3, when approved by the evaluation and the Society, application may be submitted to AKC for regular registration.

There are two immediate results of this process:

1. The dogs that we show today are a direct line from dogs that survived in the desert 7,000 years ago
2. There are dogs produced that cannot be shown because they occur too early in the generations, so cannot be registered. We have promised these dogs that upon their existence they will always have a home with us or close friends, so for the past 20 years we have had a number of dogs.

How many dogs do you currently house? Tell us about your facilities and how the dogs are maintained.
Warren & Vicky Cook: In part, as answered in the previous question, we have had significant numbers of dogs, many of which reside, day by day, in shifts in the house. We also have a climate-controlled 3,000 square foot building close to the house where those that do not have the “house shift” reside. In this building, we have 12 x 4 foot runs that open up to 1/8 acre paddocks in which the dogs exercise. Additionally, we have 2- and 4-acre exercise yards that they are run in, weather permitting.

Who were/are some of your most significant Salukis, both in the whelping box and in the show ring?
Warren & Vicky Cook: First and foremost, Ch. Santana Chubasco Hotfoot II, CC, CM, a great show dog and a fierce hunter in the open field. “Hotfoot,” when bred to Ch. Santana Chubasco Boojum CC, CM, also a fierce hunter, produced Ch. Santana Chubasco Kish, CC, CM, our first homebred champion and a bitch that we could take to the field to teach young dogs to hunt. From the above explanation of Desert Bred Salukis, we had Gen 1 Booshra, CC, CM, 2003 Top-Winning Dog All-Breed in Open Field Coursing. When “Booshra” was bred to a top-flight OFC AKC champion, she produced a Grand Course winner and two Grand Course Top Ten winners. One of the dogs that the aforementioned “Kish” taught to hunt was Ch. Santana Hoopla Sidon, “James,” a smooth, who was Winners Dog and AOM at the 2000 SCOA National Specialty under breeder-judge Mary Ellen Gorske. 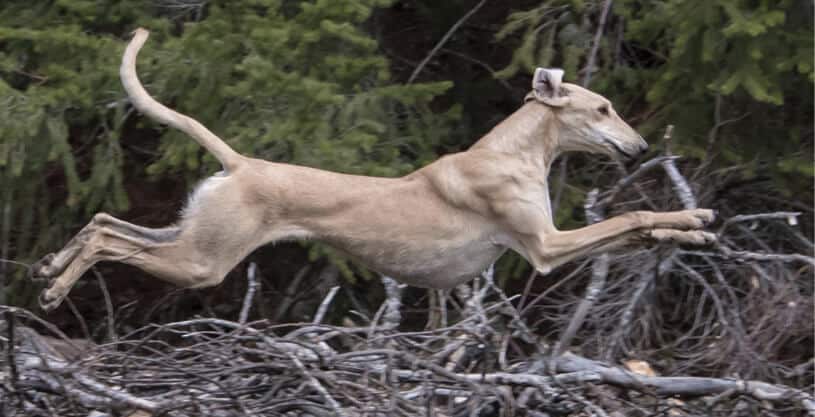 Please comment positively on your breed’s present condition and what trends might bear watching.
Warren & Vicky Cook: The genetics of Salukis is deeper and more resilient than can be imagined. The dogs that win in the ring are the best dogs there, but not always representative of what the Saluki is. We, the dog show world, have a tendency to reward the spectacular over quiet excellence. However, regardless of statistics, in progressive generations we behold dogs that are quite similar to that Generation One bitch imported at the end of the first Desert Storm. So, what we see is a breed that is, genetically, in good shape, and that exceptions that are “generic show dogs” are unusual—what, in Botany, they would refer to as a “sport.”

The sport has changed greatly since you first began participating. What are your thoughts on the state of the fancy and the declining number of breeders? How do we encourage newcomers to join us and remain in the sport?
Warren & Vicky Cook: The changes are largely a result of declining numbers and a somewhat elitist attitude held by some. When we are at a dog show, if we find someone asking questions about the breed, we have postcards with information on Salukis and contact information to us so that at the end of the discussion they walk away with something in their hands that, hopefully, answers their questions and generates more questions, which may generate more contact.
Dog shows are a discretionary activity, funded with discretionary moneys, and they are in competition with other forms of entertainment. They require devotion, assets and considerable time, with little measurable reward. It is incumbent on each of us to engage with new persons and “newish” persons, to offer help, information, guidance, unambiguous advice and, mostly, friendship.

How do you juggle your dog showing and your successful dog show photography business?
Warren & Vicky Cook: Work first. Judging second [Vicky is an AKC judge—AR]. Showing third.
We do not exhibit at shows where we shoot, with a couple of exceptions and permission from the Show Committee; we seldom show in areas where we photograph; and unless we are trying to achieve a Grand Champion certificate, we do not show beyond finishing a dog’s championship.

Could you share one great dog show photography story with us?
Warren & Vicky Cook: I was at the Umpqua Kennel Club show in Roseburg, Oregon, one year and a handler had a Smooth Coat Chihuahua up on the table for a win photo. The breed is not always known for its fronts, so as the handler repeatedly and repeatedly tried to put one front foot down straight, then stack the rest of the dog in line with that placement, the judge—the great Anne Rogers Clark—finally spoke up. “Sir! Only God can make a tree! Shoot the picture!”

Where do you see your breeding program in the next decade or two?
Warren & Vicky Cook: We think we have one more Saluki litter in us, providing we have wonderful homes for the puppies. We regret that what we have now was not 20 years ago, but art takes time. The Desert Bred and Jen Araby lines together reinforce the breadth and depth of what the Saluki should be, and we want these dogs to be in the hands of breeders who will pass the torch to the future.

Finally, tell us a little about Warren and Vicky outside of dogs. What do you do to relax and decompress when you’re not showing them or photographing them?
Warren & Vicky Cook: We talk about dogs. We live dogs. We discuss how to photograph dogs. It is our life. It is our joy. They are our moment. But we are also great believers in the importance of giving back. We volunteer as Delegates for two all-breed kennel clubs, have occupied offices in those clubs as well as offices in our breed clubs, and have both been show chairs for breed and all-breed clubs. It is important to make certain that the well that you use is carefully nurtured to continue to provide for the future. 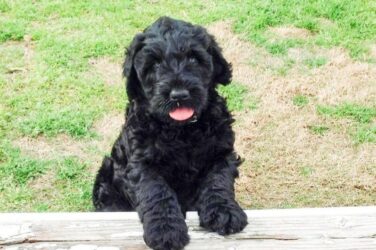 Christine Robinson is the breeder behind Black Beard Black Russians. Read about the kennel's ... 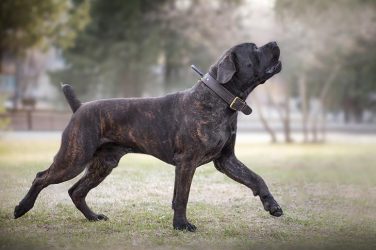 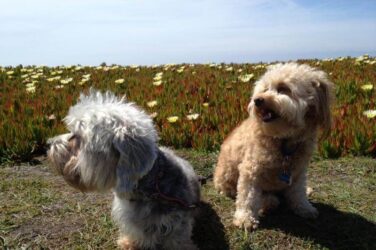 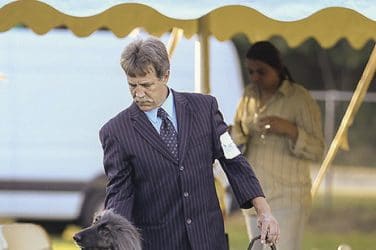