Like many breeds, the Schipperke is facing a heated debate about being shown “au natural”, when traditionally their tails have been docked. While in some breeds the difference is minor, Schipperkes have made a trademark of being a “tailless” breed, to the point that many exhibitors (seeing their tails for the first time), are often astonished to see they even have one. Perhaps some people think this only because the term “tailless” is used in the first paragraph of the Schipperke standard, rather than “docked”; but in truth, there are countless descriptions of this breed found throughout history that do describe this breed as being born this way. And in fact, by tracing back the original articles written on the Schipperke, one discovers that this is no accident. Even Schipperke fanciers might be startled to learn that this breed was never originally intended to be a docked breed at all!

Below: A top-winning Schipperke bitch in Finland. 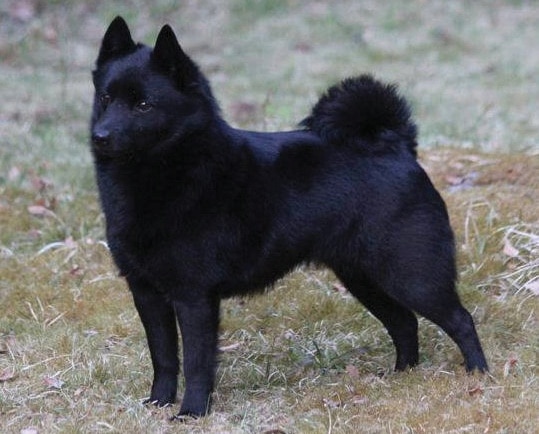 In the 1880s, far from being a prolific breed in Belgium, the early fanciers saw the breed as nearly extinct, though there were quite a few early breeders who knew of legends and gave descriptions of the breed, which had been popular 50 years prior (1830s). One early breeder was a man from England; who, coming to Belgium about 1875, began hunting for Schipperkes to “find out the truth about the little fellows being born without tails”. Early fanciers hunted out examples of the breed that were true to the “old type”, with one early breeder even visiting the Brussels market every Sunday for 3 years before he found his famous Schipperke, who he named “Spitz”. At this point, the breed itself had several names, including Spitz, Old Flemish Spitz, and Schupperke. The official name for the breed came in 1880, when a prominent figure, the Count de Beauffort, created a class for the “Schipperke” at a dog show. His description included “sans queue”, or “without tail”. In 1885, one of the earliest complete descriptions of the breed was published, and it stated that “this dog (breed) is born without a tail”. Another breeder stated that years prior, a Schipperke born with a tail was a sign that they were not purebred. Yet when the first standard was written, they opted to be frank and stated in their notes that “we do not know whether fifty years ago there were more Schipperkes born without a tail than in our own day. Those to whom the tail has not been docked, have it covered with a brush and wear it trumpet (turned up). One out of six of them is born without a tail, according to some, others not one in twenty-one.” For their standard they chose the description “tail absent”. Some time after this, one prominent fancier suggested that “It shall be proposed to the Club that the member in question undertake to inform the secretary of the date of the breeding of his bitches. In the five days following the birth, it will be noted before witnesses, how many are born within the range of having a small tail, with a full tail, and are born without a tail.” So this was a key component of the breed, though they felt it was important to first establish the old type before selecting out examples that were born tailless; stating, “The tail comes last.”

The first Schipperke to make her way to England was Flo, and she was a bob tail. More Schipperkes made their way to England over the next few years, gaining popularity as the breed was born without a tail. A few were sold to the English by the Belgian fanciers, but many others by dog brokers, and they became so popular that Belgian brokers began to breed them to “pay their rent”. In England they became show dogs and eventually were bred; and, to their owner’s surprise, most of the puppies had their tails! Some of these early litters were even killed, as the breeders thought they were not “real Schipperkes”. One English breeder sought the records of the early Schipperke litters and stated that out of 323 puppies, 16 were born tailless, 120 with stumps, and 187 with full tails.

In Belgium, the fanciers were realizing more and more that this was not a trait that could be bred true, and in 1889 the first “docking legend” appeared: two cobblers got into a fight over their dogs, and in a fit of rage, one cut the tail off of the other’s dog, and it was so sharp looking, docking became a fashion. This theory was championed by the president of the Belgium Club. 1889 was also the year when Schipperkes reached their height as a fashionable dog, being sold in record numbers to England (the Belgian fanciers were unconcerned with this, stating that “the traffickers have rendered us the service of cleaning the streets”). Meanwhile, in England, the dogs were stolen by the crews of outgoing American vessels, so they could be sold in New York! In New York a poem was published in the little dog’s honor, which said in part, “We trust, O skipper! you may jog/Along with joy divine/And feel you’re fashion’s chosen dog/ For 1889.”

Below: A Flemish painting dating to the 1870s. To the right is a small dog with a short tail, carrying something in it’s mouth. Likely an early bob tail Schipperke. 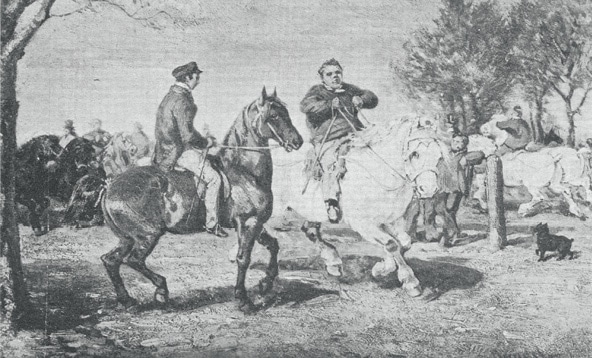 While the idea of the Schipperke being a naturally tailless breed of dog began to crumble, it came to a crashing halt beginning in 1891, when Belgium’s premier vet, Prof. Reul, wrote an article which appeared both in Belgium’s dog magazine and in a veterinary journal. He stated that the Schipperke as an “anury” (tailless) breed was a legend which had to go. Most Schipperkes were tailless for the same reason the fox-terrier was – they are docked! While he conceded that there was the rare Schipperke born without a tail, he also stated that to compliment his owner on the clever amputation of the tail would be an insult; and that he had seen written guarantees of dogs being born without a tail that he himself recalled docking! This article had long reaching repercussions, with articles published years later stating “The Schipperke has not been a great success. He took well at first, and the fact that he was born without a tail was all in his favor. Then came the distressing rumor that this was not a fact but a fiction, that in truth he has no tail for the same reason that a fox-terrier has a short one, and this rumor has robbed him of much of his distinction.”

Yet as time went on, the Schipperke kept a core of fanciers that preserved the breed. Docking legends arose, as well as theories of why they might be born tailless. The idea that repeated docking eventually resulted in them being born without a tail was fairly popular. Others thought perhaps he wore his tail off by rubbing it on the boats! Others concluded that by wagging his tail, the Schipperke would knock himself off the boat, or worse, he would capsize the boat, and thus it was docked! Yet throughout their history, breed descriptions will often include that they (or some of them) are born without a tail… and this, of course, is true.

The Schipperke’s bob tail comes from the T-Box mutation, which is dominant. This means a bob tail parent will throw 50% bob tails, and two full tails will not throw a bob tail. It cannot be bred true for two reasons: first, the bob tails vary in length from almost full to appearing to be tailless. Second, you should never breed two bob tails together, as any puppy which inherits two copies of the gene will die in utero or shortly after birth. Even if you did, each parent would carry a normal gene, so 25% of your puppies could have full tails. So while bob tails and even naturally tailless dogs have always been a part of the Schipperke breed, it is very clear that full tails have also always been a part of the breed. These days in Belgium, docking is illegal, so the FCI standard has been changed to include a description of the tail. While they prefer a strong connection to the Belgian Sheepdog and their low carried tail, they acknowledge that most Schipperkes today have a tail which curls over their back. Bob tails are uncommon in Belgium, but they can be shown there. In Finland, the bob tails are very popular, though it is illegal to breed them together. Many people have asked what sort of tail is a Schipperke supposed to have if undocked? Well, we have bred them without regard to the tail for 100 years… so there isn’t one. One Schipperke breeder judge has stated that if you hold your thumb up before your eyes and cover the tail, you can easily judge what the dog would look like if it had no tail.

Meanwhile, in America, the debate rages on within the breed… should docking become optional, with natural tails no longer being a fault? Many long time, prominent breeders support the movement (while others are quite opposed), and many of those supporters are choosing to no longer dock, and are showing their tailed Schipperkes. At this point, we have one fully tailed Schipperke champion in AKC, with a few others having their majors. So if you see a tailed Schipperke at a dog show, don’t be surprised, most are born with tails! Moreover, most of us who have them are happy to answer your questions, so please feel free to stop us and ask about the breed, and, of course, their tail!

Below: An illustration of the first docking legend, from the 1920s. 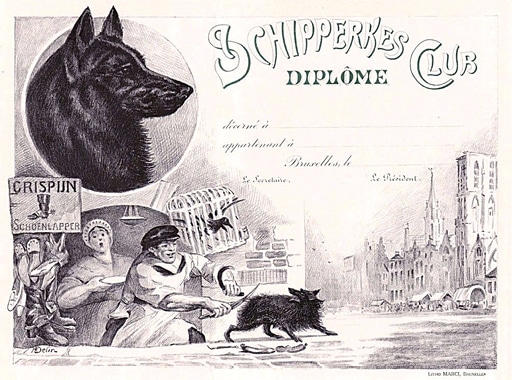 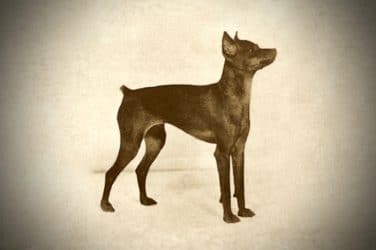 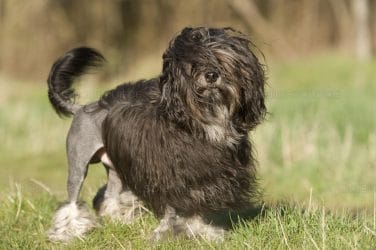 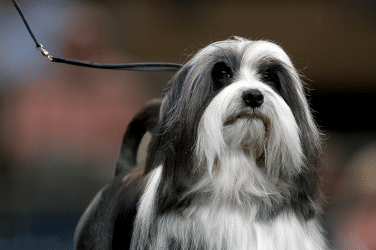 Once a Pumi, Always a Pumi