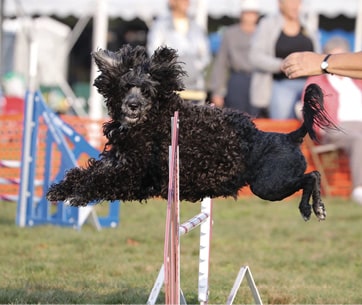 The Versatile Portuguese Water Dog | When you consider the breadth of work that the Portuguese Water Dog did for the Algarve fisherman, the versatility as a breed should come as no surprise. Jules Asbed, breeder/handler of generations of PWDs to the widest range of event titling says, “This breed has it in them to do anything. An individual of the breed will show dominant traits best suited for certain tasks, but the breed can and does do everything.” PWDs excel at Agility, Obedience, Rally, Scent and Nosework, Barn Hunt, FastCAT, Therapy, Tracking, Search and Rescue, Coast Guard Rescue, Dock Diving, Truffle Hunting, Carting, Herding, Trained Service Dog Work, Weight Pull, and PWDCA Heritage-Based Water Work.

The Portuguese Water Dog Club of America prizes and recognizes this versatility by encouraging owners with two event accomplishment award options. The Register or Merit, or ROM, is an AKC event-based award sequence. The Multiple Achievement Certificate (MAC) is a program that recognizes the many PWD owners and dogs who train and compete in a wider range of dog sports and activities, regardless of registry, area of competition, or title. Since 2014, PWDs with herding and carting (as well as the more obvious dock diving and alternate agility systems) have been recognized by the parent club through the MAC program.
An example of one very versatile dog is “Taylor,” Herding AHBA, Agility AKC and CPE, Rally UKC and AKC, Scent Work AKC and CPE, Nose Work NACSW, Barn Hunt, Obedience CDSP and AKC, Dock Diving UKC and NADD, which is recognized by AKC, AKC FastCAT, AKC Companion Dog titles, Farm Dog and CGC, and Portuguese Water Dog Club of America water titles Courier Excellent and Working Excellent.

The Annual PWDCA National Specialty showcases the versatility of the PWD and the desire for a “front- and back-titled dog” by starting with two days of two rings of water trials. Breeders and owners handle more than one hundred PWDs to water titles and in a Senior Water Showcase at PWDCA Nationals. Additionally, PWDCA Sanctioned Water Trials are held across the country annually. As many of our best breeders like to say, “The best way to evaluate a dog’s structure is to see them dripping wet and working.” During those years when suitable sites can be found, Tracking is often on the same weekend, with dogs participating in both Tracking and Water Work on the same weekend.

Courier and Master level include a “reverse retrieve” in which the dog takes a buoy ball at the stern of boat and swims approximately 75 feet straight out to nowhere and drops on command upon the judge’s signal.

This showcase of Heritage Water Work is followed by Agility, Obedience, Rally, and now, as many Scent, FastCat, Trick Dog, and other events as can be squeezed into the schedule and location. Many dogs go from the Breed ring to Obedience to FastCat on the same day. Also highlighting this versatility is SUPERDOG, a very special honor awarded at the end of the National Specialty. This honor recognizes the overall versatility of the Portuguese Water Dog. It rewards the capabilities and efforts of the individual PWD that competes in three or more events and accumulates the most overall points for placements and qualifying performance. To be eligible for SUPERDOG, dogs must be entered and compete in at least three of the seven possible areas of competition: Conformation, Obedience, Agility, Water, Rally, and (if offered) Tracking and AKC Scent Work.

Louise Mowbray, who has titled multiple breeds in Obedience, Tracking, Conformation, and Agility says, ”More than any other breed I have ever had, the PWDs have always been willing to learn what I ask of them.” Proof is found in the multiple VCD PWDs Louise has trained and handled with advanced water titles. None is more titled than VCCH MACH3 “RIXA” UDX3 OM3 RE MXC MJB2 MXF T2B THD CWDX and 2011 PWDCA National Specialty SUPERDOG, one of only a few to win SUPERDOG with exclusively performance points. “Rixa” was also an exceptional Therapy Dog, with many hospital visits under her harness.

The Portuguese Water Dog’s “fair nose” is showcased in Tracking, Scent Work, Nosework, Truffle and Sorel Mushroom Hunting, and most especially, in the exceptional work many do in Search and Rescue. A PWD, “Dutch,” was among the first to search Ground Zero. To read more about his work go to: https://www.eightpondfarm.com/narrativeWTC.html. Another PWD, handled by Connie Millard, “Spider,” who also happens to be the litter brother of the aforementioned “Rixa,” excels in Search and Rescue and served as part of the Katrina recovery effort as part of Missouri’s Task Force. Spider is also an avid Sorel Mushroom Hunter in the woods near his home. Other PWDs serve in Search and Rescue and, in Europe, in the Coast Guard.

It often comes as a surprise to many in the US that the FCI includes the Cao de Agua in Group 8: Retrievers/Flushing Dogs/Water Dogs [UK Gundog Group]. While not the most common of hunting dogs in the US, more than one Portuguese Water Dog has successfully assisted owners with fowl retrieving on hunting excursions. From Doug, breeder and hunter: “Caeli is an upland bird versatile hunter, will quarter, seek & ‘point’ and is ruthless in finding wounded birds.” Doug prefers to hunt grouse, but Caeli will retrieve big pheasants as well. She has persisted finding lost birds when his companions’ Retrievers, Setters & Spaniels quit trying. “When Caeli says there’s still a bird in there, there’s a bird in there!”

When you think about the activities the dogs did for the fisherman, this versatility seems obvious. From the Portuguese history of the breed: For centuries, the tradition of using the water dog on fishing boats was firmly established over all the Portuguese coast, especially in the Algarve area, and the value attributed to the dog was beyond price.

The fact that the dog was considered to be a member of the crew on the fishing boats, and his work was entitled to payment equal [to that of] any other fisherman, clearly indicates how valuable the work of the dog must have been.

In effect, what was expected of the dog is quite incredible; riding the ocean surf on the prow of the boat, keeping vigil to the sea, he would signal the presence of a shoal, warn the crew of sharks, and stand ready to jump and dive into the water to help place the nets or bring in the catch. Often, he would retrieve escaping fish from the net.

Among other important tasks, he was expected to swim to shore, to bring back
messages or bring in food and drinking water, and this implied swimming a great distance in heavy currents and deep, cold waters.

All of this work could only be performed by an intelligent, athletic, and independent dog that could make decisions under stress and conclude his work without assistance. Several histories of the exploits of the dogs in saving the lives of fishermen who met with accidents and on the verge of drowning are told by the fisherfolk of the Algarve. pp 31-32 Molinari, C. (1993). The Portuguese Water Dog. Portugal: ELO-Publicidade, Artes Graficas.)

The Portuguese Water Dog is spirited yet obedient, robust, and of unexaggerated, functional conformation; sure, substantially boned and muscled, and able to do a full day’s work in and out of the water.

An animal of spirited disposition, self-willed, brave, and very resistant to fatigue. A dog of exceptional intelligence and a loyal companion, it obeys its master with facility and apparent pleasure. It is obedient with those who look after it or with those for whom it works. —PWDCA Standard 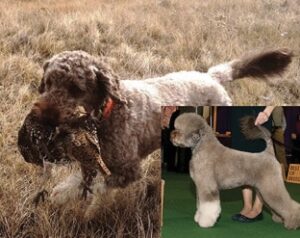 For some PWDs, the work that they excel in is as a Service or Therapy Dog. While not as “drive-y” a job, these dogs still use the exceptional intelligence, bravery, loyalty, and stamina repeatedly mentioned in the Breed Standard. 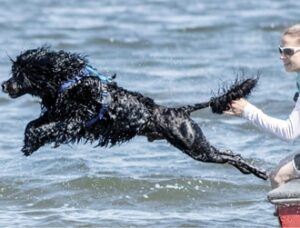 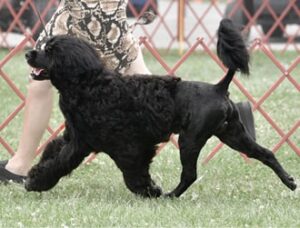 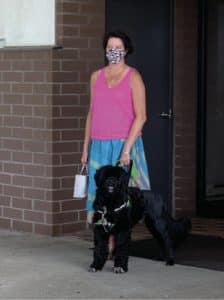 For some PWDs, the work that they excel in is as a Service or Therapy Dog. While not as “drive-y” a job, these dogs still use the exceptional intelligence, bravery, loyalty, and stamina repeatedly mentioned in the Breed Standard. Many of these dogs also hold multiple titles. “Deja” is following in his sire, Jack’s, versatile footsteps. In addition to his Service Dog work, “Jack” was titled in Conformation, Agility, Obedience, and PWDCA Water Work. Deja, while learning to serve as a fully trained Service Dog guide, has also been training for Water Work, and has earned his breed Championship. (He enjoys FastCat as a way to relax!)

Here’s a quote from the breeder of the 2021 National BISS GCHP MACH “Smolder” RA MXG MJG T2B OF CA DCAT RATO CGC WWD GROM: “What I love about this breed is they are such willing workers that are up for anything! They love nothing more than to be with their people and enjoy participating in anything you throw at them. When you have a structurally sound dog, they should excel in both the performance AND conformation rings. These are ‘working’ dogs and should be built, physically and mentally, to complete many tasks in a day’s work. That’s something we, as breeders, should always strive to produce. We don’t want to lose the ‘working’ in our
‘working dogs.’”

In short, it is important to remember that the PWD NEEDS a JOB to DO—usually more than one! They can shift from activity to activity in the blink of an eye. I cross-train for Water Work in the Obedience rings and Agility field. Several of my dogs got bored with “running water drills” and so we had to make up alternate activities to maintain interest. The Portuguese Water Dog is limited only by the handler’s time and interest. The breed can, and will, do anything. 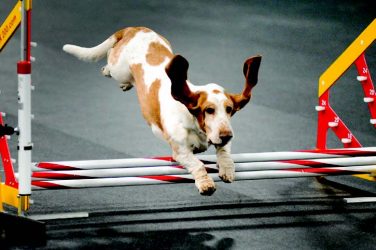 The Seven Secrets of Show Success