ORIGIN – The Korean Jindo dog is an old breed that originates from an island called Jindo, which is located off the southwest coast of South Korea.

There are no written records about how the first dogs arrived on the island of Jindo. However, there are several theories that have been presented in the past. The most widely held theory is that the Jindo dog originated from the dogs already indigenous to the Korean peninsula, thousands of years ago.

Dogs born on Jindo Island fall under the jurisdiction of Jindo County. The county holds bi-yearly evaluations of young dogs, is responsible for the protection of the dogs, and hosts the annual Jindo Island dog show. 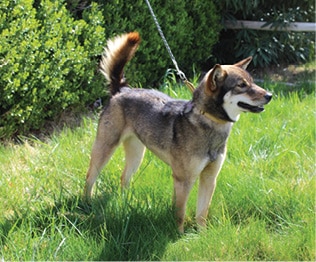 STATUS – In Korea, the Jindo dog is designated as Korea Natural Treasure #53. Dogs born on Jindo Island fall under the jurisdiction of Jindo County. The county holds bi-yearly evaluations of young dogs, is responsible for the protection of the dogs, and hosts the annual Jindo Island dog show. A research institute was created in 1999 for the study of the Jindo dog.

There is a large population of Jindo dogs that live outside of the island. The mainland of Korea has a significant population (perhaps half of all Jindos in South Korea) and there are many Jindo dog organizations that strive to preserve the purity of the breed and promote the propagation of excellent dogs. In Korea, both Jindo populations are registrable under the Korea Kennel Federation, which is the FCI member club for South Korea. Under the label “Korea Jindo Dog,” the Jindo received full breed recognition in 2005 as FCI Standard No. 334. 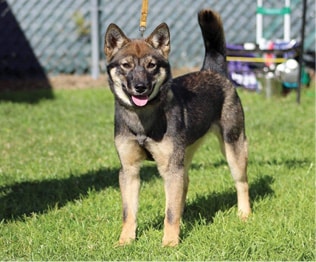 In the United States, the Jindo dog can usually be found in large Korean immigrant communities. Korean Jindo owners in Los Angeles, California, established a Jindo breed club in 1993 and started conducting shows in 1995. Jindo judges were flown from Korea to the US to judge these shows.

In 2008, the Jindo was accepted into the AKC Foundation Stock Service.

In 2012, the first imports directly from South Korea were entered into the AKC-FSS stud book, with the very first AKC-FSS litter born in 2014.

The Korean Jindo Association of America was formed in 2017 as the breed’s future parent club.

As of January 14, 2021, there are 35 Jindos recorded with AKC-FSS, and of those Jindos, 11 are titled. Those 11 Jindos have earned 42 titles combined, including two Certificate of Merit titles.

TYPE – There is a certain presence that a Jindo dog gives off that is different from any other breed. Even though the Jindo dog was allowed to develop under natural selection due to the difficult living conditions of Jindo island, they were influenced by the preferences of the Korean people. Dogs that exemplified the traits that Koreans admired were helped along. It is through this Korean input that the Jindo dog is distinguished from being just one of the many primitive, pariah, or spitz dogs out there to being a Korean treasure. 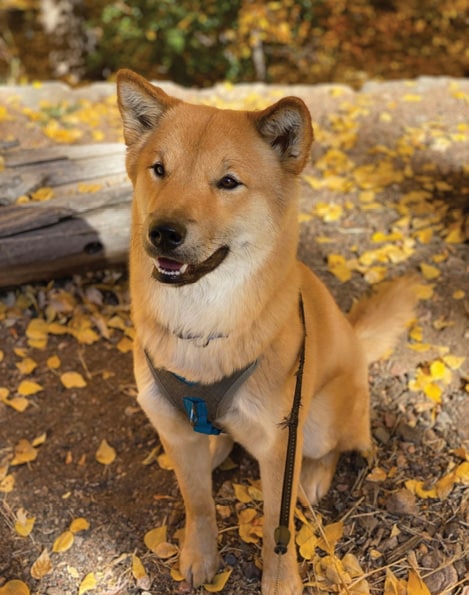 With the Jindo, the breed’s function was determined not so much by man, but was determined by its environment: “Nature-made.” “Natural.” “Naturally Selected.” These are the comments used when describing the first impression given off by a Jindo. In observing the Jindo dog, instead of examining up close and entangled with only the details, it is better to take 7-8 steps back and see the dog’s body as a whole, feeling its natural and bestial beauty. And if the observer is keen, he will be able to see that every part of the Jindo dog’s body is composed of curves, and not an angle or a line is to be found. The traditional Korean arts emphasized the softness of the curve and simplicity; and instead of “vibrant,” preferred moderate and soft colors. It is obvious that the appearance of the Jindo dog follows the Koreans’ feelings.

The Korean Jindo is a well-proportioned, medium-sized dog (between 39-50 lbs. for males, and 33-41 lbs. for females). With prick ears and a rolled or sickle-shaped tail, they should be a vivid expression of agility, strength, alertness, and dignity.

The ears should be medium in size, triangular in shape, thick, and perfectly erect; set neither high nor low, and point slightly forward, in line with the back of the neck. When let down, the tip of the tail should reach the hock. If sickle-shaped or rolled, the end of the tail can touch the back or flank, but should not be too curled. The tail is profusely feathered.

TEMPERAMENT – The Jindo dog developed certain character traits as it developed further on the island. They are noted as having a strong spirit, which was encouraged due to the difficult living conditions on the island. Many of their owners could not provide more than meager scraps to their dogs, and so the dogs had to hunt for their own food, and also, sometimes, their owner’s food. Dogs roamed freely on the island, and they retained many primitive traits in order to survive and thrive. 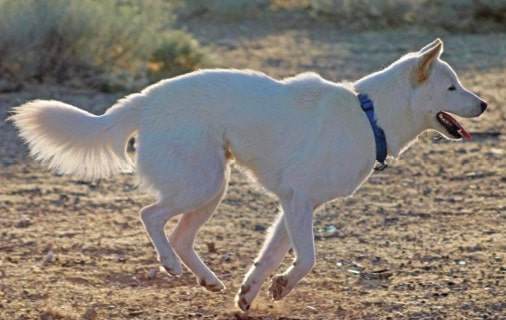 The Jindo often traveled long distances or several days on the island, and so a natural homing ability developed in them so that they could still find their way home to their master. This homing ability was tested in modern times, even when the Jindos were removed far from the island.

No big predator lives on Jindo island. However, the Jindo dog has a reputation for being extremely brave and courageous in facing
these animals. This reputation was based on how, a long time ago, dogs were taken from the island and a few lines were used by nobles and hunters. They were used to hunt big game animals located on the Korean peninsula, where the quarry was finished off by the human hunter’s arrow or spear. The types of animals that were encountered in Korea were leopards (Amur leopards), tigers, wolves, bears, and wild boars.

A properly socialized Jindo is a supremely self-confident animal and should not be dog aggressive on neutral territory. When its personal space is invaded or directly challenged by another dog, the Jindo will most likely react with extreme displeasure. But, otherwise, they should not be snarling and snapping uncontrollably at the sight of another dog. Under-socialized or fearful animals will sometimes react with a threat display, and so it’s very important to socialize a Jindo as much as possible. Obedience school is recommended at six months of age, but earlier socialization under safe, controlled conditions is strongly recommended for this inherently suspicious breed.

Q: Is this the breed that they eat in Korea?

A: Historically, the Jindo was not the breed raised for consumption in Korea. The Jindo was valued for being an extremely intelligent hunting dog. It was a different spitz dog referred to as Nureongi (누렁이) that was reared and consumed by a small portion of the population.

However, the situation in Korea is changing. Before, Koreans would say, “Why would I want to own a dog?” But now, the attitude has changed to, “Maybe I’ll try owning a dog.” The result is not only the increase of pet ownership of all types of breeds, but also an increase in owner-surrenders. The disposable pet attitude that afflicts first-world countries like the US is also present in South Korea. Unlike the US, though, where there are municipal shelters in every city and private rescue groups, there are fewer options for unwanted dogs in Korea. This is why one will see Mastiffs, Golden Retrievers, Toy breeds, and Huskies, as well as native spitz-types, in the meat markets.

Q: Is it illegal to export a Jindo puppy out of Korea?

A: No, it is not illegal to export a Jindo puppy out of Korea. The Jindos located on the mainland of Korea are not under any protection regulations and may be exported, i.e., international airline travel paperwork freely denotes “Jindo” for a dog’s breed. Jindos within Jindo Island require a transport/export document from the county in order to be moved off the island and out of the jurisdiction of the protection regulations.