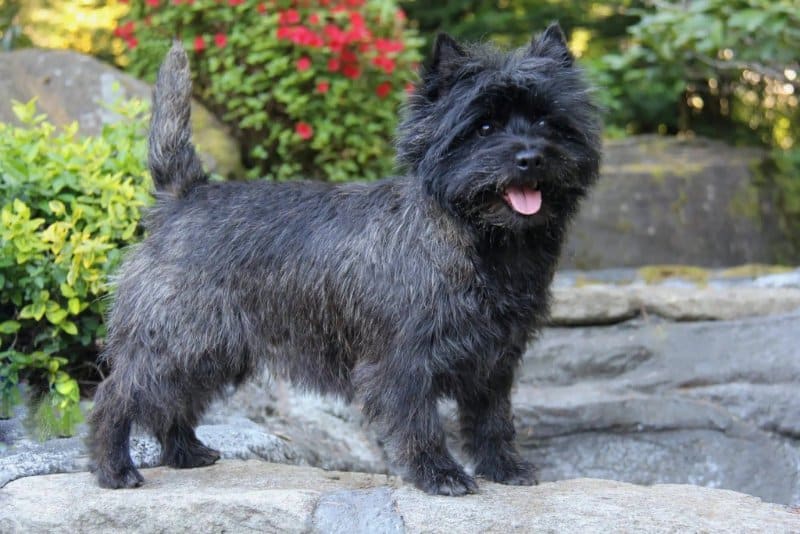 From the earliest recorded history of man and dog, there have been accounts of small terriers working with farmers to control the vermin that inflicted costly predatory raids on the crops and domestic animals of the crofts on which they all lived. In each geographical area, different assets and abilities were sought in these dogs. In the Highlands and Outer Islands of Scotland, what was needed varied as well.

Gradually, they came to be somewhat distinct in type and the West Highland and the Scottish Terrier, as well as what we now know as the Skye Terrier, were named and recognized. Still, there was a small terrier, rather scruffy in appearance, smaller in bone than the Skye and the Scottie, more agile than either, which had no name. Various nomenclature was assigned to them and discarded when these names conflicted with names used by other breeds. With much discussion in the doggy press of the day, finally the name Cairn Terrier was settled on.

From that time forward, the Cairn Terrier has stood alone as the “original” old working terrier of Skye, closest in type to the dog the crofters on Skye depended upon to rout the badger and otter from their land. This dog shared the crofter’s fare, meager as it might have been and worked tirelessly in the cold and wet terrain with him.

The Cairn is a study in contrasts—he is a “big” dog in a small package; nothing about the dog is delicate. He has a medium length of leg—neither short nor long. There should be some daylight under the Cairn. He is a working terrier and needs sufficient length of leg to climb or jump over rough terrain. A great word picture was created when one of the founders of the breed, Mrs. Alastair Campbell, was quoted as saying “They should be light-footed and almost dance along… like polo ponies, sturdy but light in their action and body.” Thus, a Cairn should be lithe, flexible and athletic.

The Cairn’s ribs extend well back on his body and the ribs are joined to a strong loin and connected to well-muscled hindquarters. He has a medium length of back, decidedly not a short back which would give the impression of squareness. The Cairn is not square. His body length is one and one-half times his height. This medium length of back is essential for a dog that must leap and bound and more critically, be able to turn around inside a cramped earthen tunnel in order to exit the burrow.

The body is strong and substantial, not weedy or coarse. The ribcage is well sprung and tapers to a heart shape, neither barrel shaped nor slab sided. The ribs extend well back on the body and the rib cage should extend to the elbow in a mature dog. The breastbone should be clearly discernible. Length of loin is medium, strong and supple, giving the dog the necessary flexibility to turn in a tight tunnel and to maneuver among the stones and outcroppings of his native habitat. The neck length is medium. The topline is level and the tail is set on at back level. There should be a prominent point of buttocks beneath the tail, extending out beyond the set on of the tail. Well-developed muscles should be obvious, especially in the hindquarters.

Legs are medium length and should be covered with hard hair of moderate length. Bone in the leg, as in the rest of the Cairn, is medium. Feet must be thick, toes well arched with large, short and strong, black nails. Forelegs are perfectly straight, but the feet may turn out slightly. Rear legs must be well muscled and the angulation should match that of the front quarter. Hocks are short, perpendicular to the ground and turn neither in nor out, the rear feet falling only slightly behind a straight line dropped from the point of buttocks.

Most importantly is the word “Medium.” This is essential in describing the Cairn. He must be balanced and proportionate in every aspect. The Cairn should always be considered a working dog, with a natural appearance. He is moderate in every way, without exaggeration in any part.

The Cairn Terrier’s head is medium in size, like everything else about the Cairn, balanced and in proper proportion to the body. The expression is full of life, intelligent and keen. Both skull and muzzle should be broad in proportion to length, with a pronounced, deep stop between the eyes. The muzzle is full, holding a full set of large, strong teeth in a scissor or level bite. The furnishings on the skull and muzzle serve to shield the dog from briars and thus should not be too soft, though they may be somewhat softer than the body coat. The eye of a Cairn Terrier is oval in shape, medium in size, widely spaced and deep set, under a brow that creates a pronounced stop. They are not round or prominent. The color is dark hazel.

Ear placement is critical to the Cairn’s expression. They are placed on the corners of the skull, not too close together, nor too far apart and they should be carried erectly, at attention. Ideally, the tips of the ears and nose should form an equilateral triangle along which the eyes are aligned. The top one third to one half of the ear should be free of long hair and covered with short velvety hair.

The tail of a Cairn is moderate in length, straight, thick and strong, set on at back level. It should be well furnished with dense hair and should appear much thicker at the base, tapering to the tip. Carriage should be up, though not necessarily vertical and it should never curl over the back. All Cairns should carry their tail above the horizontal when gaiting.

The Cairn should move freely and easily, on a loose lead. There should be good reach in front and powerful drive from the rear, producing a smooth, ground-covering, effortless movement, with no bouncing of the topline. When viewed from the front, the legs should be a straight column of bones. From the rear the legs should be a straight column, hocks turning neither in nor out and hocks should flex enough to see the pads from behind the dog. The footfall may converge slightly with faster movement, but the straight column from hip to pad should be maintained. The overall impression should be that of a dog that can trot smoothly and efficiently all day, climbing over piles of rocks, digging for prey.

It is hard to overemphasize how important a Cairn’s hard, profuse double coat is to the dog’s survival in his native element. Its purpose is to prevent cold and wet from penetrating to the skin and to protect the Cairn from the teeth of his prey. The outer coat is profuse and harsh and most importantly, the outer coat should be approximately the same length all over the body. Any resemblance to the “jacketed” or “sculptured” look of the more stylized terriers is objectionable and should be severely penalized. The undercoat should be short, soft and profuse, but will vary somewhat in density, depending on the season and climate in which the dog lives.

The Cairn Terrier comes in an array of colors, including cream, wheaten, red, red wheaten, gray and silver. Brindles occur in all the above colors, as well as a black brindle. The dark “points” on the muzzle, ears and tail tip, are desirable and typical, adding to the distinctive look of the Cairn. Black and tan markings or patterning of any kind (other than brindle) are objectionable. There is no preference for any color.

There has been a progressive increase in the average size of the Cairn Terrier in the last 25 years.
Historically, the Cairn has varied somewhat in size, but the Standard says the Cairn should be 13-14 pounds and stand 9½ to 10 inches tall. The Cairn Terrier must, above all, be balanced. The proportions given in the Standard must always be applied. When a Cairn Terrier appears square, or close to square, he is in direct contradiction to the Standard, regardless of his height. A Cairn must also have medium bone. Nothing about the Cairn is delicate or refined and nothing is coarse or bulky. The Cairn is a solid little dog, surprisingly heavy for his apparent size.

The Standard says the Cairn should be shown in “Full good coat” which means plenty of coat, dense and properly straight, although a slight wave is permissible. The coat should be two to three inches long over the entire torso, not stripped down on the back with long coat on the sides and belly. The head of a Cairn Terrier should have a natural, somewhat untidy look and there should be sufficient hair on the neck to protect this working dog. The coat of a Cairn Terrier should be worked entirely by hand, never cut by scissors or knife. Scissors may be used only around the feet and tips of ears.

A Cairn Terrier’s tail is one of the more distinctive characteristics of the breed. When a Cairn is presented in a proper coat, the tail will naturally be densely coated, especially at the base, groomed to be shorter near the tip, longer at the base, like an inverted ice cream cone.

The Standard calls for the Cairn to be shown on a loose lead and this is most important for the natural appearance of the dog. A loose lead should have a moderate amount of slack in it. Exhibitors handling the Cairn Terrier should be on their feet. The dog should be standing free and even moving about, like the lively, active dog he is. When gaiting, the dog should trot freely and gaily by his handler’s side.

The Full Illustrated Guide to the Cairn Terrier is available for purchase from the CTCA website at:  http://cairnterrier.org/index.php/Publications.

Read and learn more about the cheerful Cairn Terrier dog breed with articles and information in our Cairn Terrier Dog Breed Magazine. 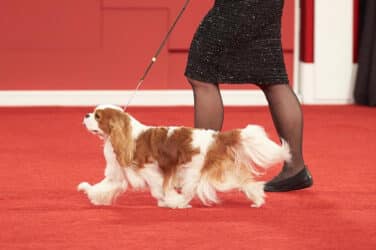 Judging Irish Wolfhounds - A Guide by Joel Samaha. Illustrations by Beverly Stobart and ... 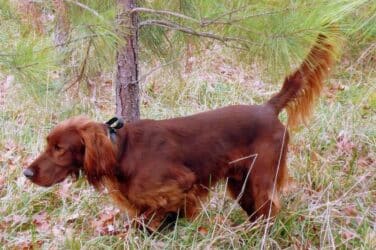