My husband and I were lucky enough to attend two great events in Portugal relating to the Podengo breed. The first was a hunting demonstration in Evora. The event invitation was as follows:

Meeting with the Portuguese Breeders of the group Rota do Podengo Português on a real hunting field to observe the best Portuguese Podengo packs, from different sizes and varieties, hunting during the morning, followed by a traditional barbecue on  the countryside.

After lunch we will have discussions about the breed in several items and the possibility of interaction and exchange of experience with all the Portuguese breeders present.

A great opportunity to learn more about the breed, to get to know many of the Portuguese Podengos in Portugal and the top hunting/breeders, and to spend a great day in a beautiful landscape, with great people, great food and great wine!”

I was excited to be able to attend but I pictured just following some hunters around the fields with their Podengos. Maybe a bit of discussion but most of it would go over my head since I am not a hunter. This was NOT the case! The members of Rota do Podengo Português put on a most informative day. Podengo enthusiasts from eight countries attended. After we assembled the crowd, had introductions and insights on why they felt this was an important event to host, we gathered around large tables for breakfast in their rustic hunting lodge. We instantly felt at home. I think we all felt a strong connection to each other despite any language barriers. We all had one thing in common, the love of dogs but even more specifically the love for our wonderful breed, the Podengo Portuguese. I instantly knew this would be an even more interesting and enjoyable day than I had expected. We headed back outside, talked more about what they expected from the dogs and why. Then they gathered the dogs and off we went.

We broke up into small groups while heading out. Walking alongside the members of the Rota do Podengo Português, we watched them work with their dogs. We were able to ask questions.

It was interesting to hear the other participants’ questions as well. All the groups met up for a refreshment in the shade, a Fado song under a cork tree, and many more questions and answers.

Off again as a large group, we stopped at a pond for the dogs to drink and cool off, then returned to the hunting lodge.

After a wonderful and very lively luncheon and a glass (or two!) of wine, we had the privilege of previewing a book of photographs of Podengos on the hunt, since published. Then ensued a long, interesting, informative, and spirited discussion of the Podengo breed standard. Henrique Passadinhas (a respected hunter, breeder, and judge) led the discussion, covering many of the more tricky parts in the standard and turning this into a most informative Podengo seminar.

The day was getting late. We had gathered at 7:30 am and it was now after 5 in the evening. Before saying “Good-byes,” though, we watched a demonstration of the newly approved Natural Skills Test. This is a pass-or-fail test that evaluates five different areas: sociability, search, smell capacity, prey instinct, and balance. The test is reviewed by two judges. One of the participants tested her dog at the demonstration and it did very well. It made an interesting ending to a
magnificent day.

The second event was the very next day. The Monografica Podengo took place in Arruda dos Vinhos. The Monografica is comparable to a specialty here in the States. Only 20 minutes outside of Lisbon, the building was perfect to accommodate this event.

Anyone who has been to a dog show with me knows, I take seriously the advice that—“early is on time, on time is late, and late is unacceptable!” So despite having an early start the day before and arriving back from the hunt at almost midnight, I was eager to get to the Pavilion to see the dog show. We arrived early so we were able to greet participants as they arrived. Many of the new friends we had met the day before came either to enter their dogs into the competition or as spectators like us.

Approximately 100 Podengos of all three sizes and both coats were represented. They had two rings set up and two judges for the day. Luis Gorjão-Henriques was the judge for all the medios and grandes as well as the best-in-show judge. Fernando Madeira Rodrigues was the judge for all the Pequenos as well as for best brace, best breeder group, best veteran, best progeny, best baby, and best puppy. Although interested in all three sizes, I found myself ringside for the Pequeno judging. We sat and watched for a few hours as each group of dogs was judged. The final group for best in show had a Podengo from each size and coat represented. The winner was a beautiful Medio.

Then came lunch festivities. The Portuguese are wonderful hosts and have such a hospitable spirit. We had a delicious lunch served with flowing Portuguese wine, followed by champagne, port, and a local liquor regional to the area of Arruda dos Vinhos. The luncheon perfectly reflected the friendly camaraderie that seems to mark the dog shows in Portugal. The competition is serious and intense, the judging rigorous, but rancor and rivalries seem to be left at home. It was nice to be part of such comradery. I found myself wishing that we, AKC participants, could learn to follow this example. Our dog clubs seem to be divided and filled with tension and rifts. I believe we don’t take enough time to enjoy our competition and our fellow breed enthusiasts.

The Portuguese Podengo owners, one and all, were welcoming hosts at both events, patient with all of our questions, and thoughtful in their discussions of various views on important breed issues. They made our visit into an enjoyable and very educational session about the Podengos. It was great to learn about the Podengos in their home country, “straight from the horse’s mouth.” Based on this experience, I recommend that anyone interested in learning more about Podengos go to the source: Meet the hunters and breeders in Portugal, see what the Podengo is bred to do, and attend a show.

I have been to Portugal over ten times and driven all over the beautiful countryside in search of Podengo education. I place a lot of value on learning about my breed from the source. Why does the Standard say blacks are not preferred? What was the thinking behind that? Why should the Pequeno be between 8 and 12 inches tall? Why is 13 inches too much? How does my breed hunt? Why is it a hound and not a terrier?

If you need any recommendations or tips for traveling in Portugal, just email me. I’d be happy to help. Coming up in April there will be a two days gathering of Portuguese Podengo Breeders, show judges, and Podengo Enthuiasts from all over the world to LEARN, DISCUSS, and SHARE about the Breed in a deep, serious, and open minded way! Our goal is to have the most EDUCATIONAL and rewarding event ever done about the Portuguese Podengo and to come to some conclusions and useful guidelines for the improvement of the Breed and breeding practices worldwide! We will do this in the wonderful Alentejo region in Portugal, during spring time with marvelous landscapes, great traditional Portuguese food, and having the opportunity to the culture of Portugal. To get all the information you need about this event, please write to  podengoseminar@gmail.com. 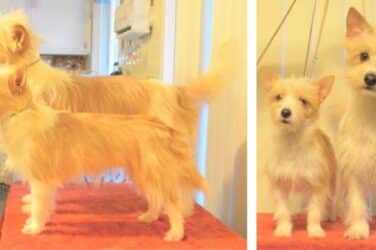 Portuguese Podengo Pequeno is primarily used as a rabbit hunting dog. It seeks for ... The Portuguese Podengo breed is also known as Warren Hounds in England. Find out ... Read and learn about the presentation of the smooth and wire-haired Portuguese Podengo Pequeno ...